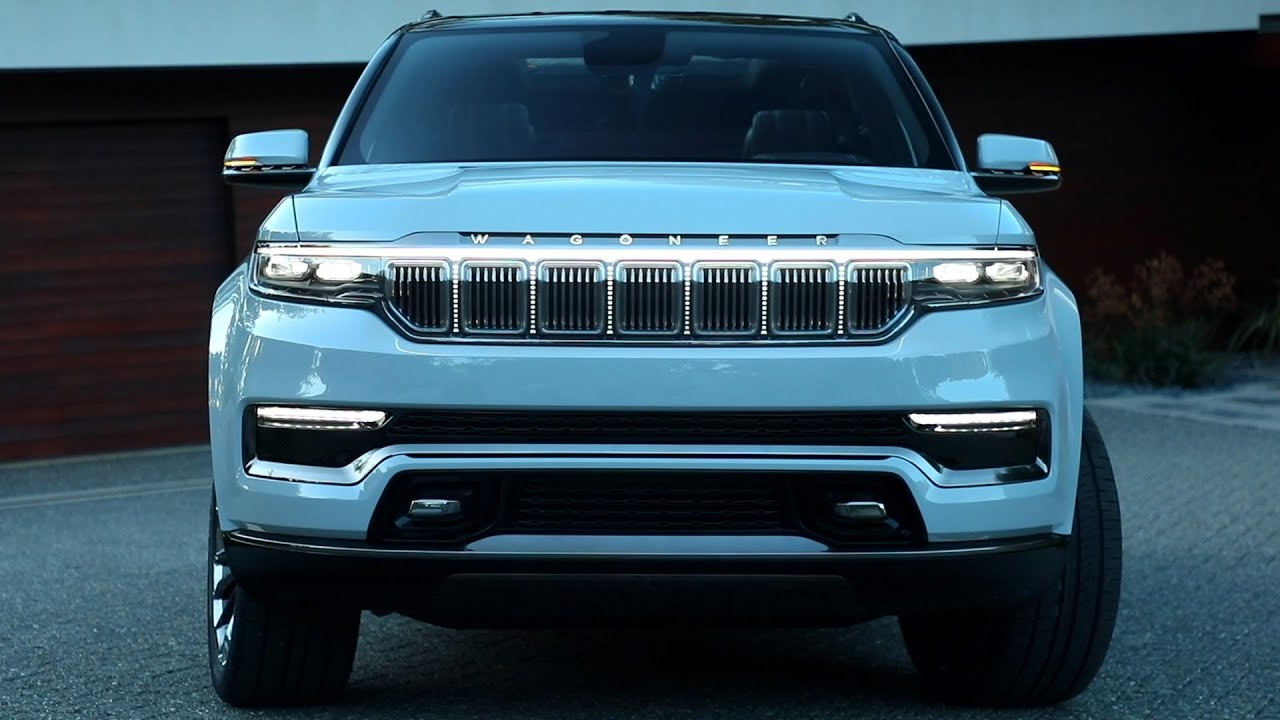 2022 Jeep Grand Wagoneer – Luxury 7-Seat SUV to compete Navigator and Escalade. The new Jeep Grand Wagoneer represents many things for Jeep: the return of an iconic nameplate, the first three-row model for the brand since the long-forgotten Commander, and FCA’s only player in the highly profitable full-size SUV space.

Before the real Grand Wagoneer goes into production next summer at FCA’s Warren Assembly Plant in Michigan, we’re getting a thinly veiled concept version that foretells much about the new model’s exterior and interior styling, even if many of its powertrain specifications and mechanical details remain under wraps for now.

In essence, the Grand Wagoneer is an SUV version of the Ram 1500 full-size pickup. Both vehicles are built with body-on-frame construction but the Jeep uses an independent rear suspension setup, unlike its pickup-truck stablemate that rides on a solid rear axle. The Wagoneer will likely be similar in size to the Chevy Tahoe and Suburban, although Jeep is not yet providing dimensions. The standard Wagoneer version will be the mainstream competitor to Chevys and GMCs, while the more upscale Grand Wagoneer previewed here is spearheading Jeep’s ambitions to duke it out with the Cadillac Escalade, Lincoln Navigator, and even Mercedes and Range Rover’s top offerings.

As such, the Grand Wagoneer concept has the brash design you’d expect from a full-size luxury SUV: lots of chrome, massive 24-inch wheels, and intricate detailing found in the lighting elements, badging, and grille (some of which may not reach production, of course). Unfortunately, we’re not seeing much influence from iconic Wagoneers of yore in the new model’s fully modern design, and the body-color C-pillars don’t help with the awkwardly tall proportions, especially at the rear.

Unless the Grand Wagoneer concept car’s interior is significantly decontented for production, the Mercedes and Range Rover comparisons aren’t so far-fetched. The cabin looks rich, modern, and elegant, with a nice mix of wood and leather. The number of screens found inside is absurd and includes a digital gauge cluster, upper and lower infotainment displays, rear entertainment screens mounted on the backs of the front seats, a screen between the second-row seats for climate control and other functions, and even a display screen on the dashboard specifically for the front passenger. Jeep says the Wagoneer will use a new version of FCA’s infotainment software called UConnect 5, and it will offer an optional premium audio system from McIntosh.

Three rows of seats will be standard, with this concept version offering a seven-passenger configuration with second-row captain’s chairs. We expect Jeep to offer a second-row bench seat as well for eight-passenger capacity, and the company is claiming the production version will have best-in-class passenger volume. It’s unclear at this point whether Jeep will offer two different wheelbase lengths like its chief rivals do.

All we know about what powers the Grand Wagoneer concept is that it’s some sort of plug-in hybrid drivetrain. The production model will likely share its powertrain offerings with the Ram 1500, which would mean hybrid-assisted 3.6-liter V-6 and 5.7-liter V-8 gas engines and possibly a turbo-diesel 3.0-liter V-6. A plug-in-hybrid version is sure to reach production as well. Four-wheel drive will be standard, and Jeep says it will offer three different 4×4 systems and an optional air suspension.

Jeep president Christian Meunier said that fully loaded Grand Wagoneers will top $100,000, which sounds wild for any sort of Jeep but is not quite as crazy as it sounds given the existence of a $60,000-plus Wrangler. The standard Wagoneer will start around $60,000, Meunier said, as Jeep attempts to provide for the wide range of customers shopping in the full-size SUV space. The Wagoneer and Grand Wagoneer will start arriving at dealerships in mid-2021, so we look forward to hearing more about the production versions of these new and significant Jeep models.