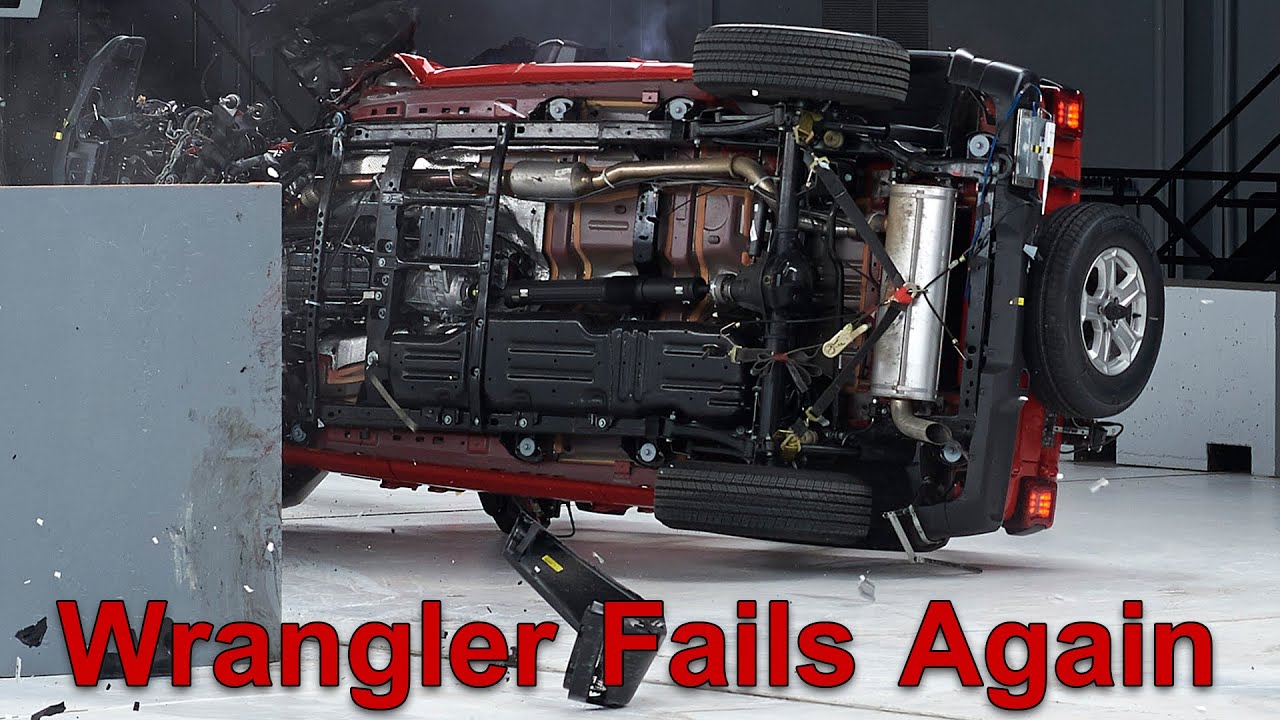 2022 Jeep Wrangler Tips Over in IIHS Crash Test, Yet Again. The Insurance Institute for Highway Safety issued a marginal rating for the 2022 Jeep Wrangler Unlimited in the driver-side small overlap crash test after it flipped onto its passenger side during the agency’s latest evaluation. The four-door SUV is a repeat offender in this category: the 2019 model also failed to stay upright after it struck a barrier.

Despite the improvements made to address the issue by Jeep parent Stellantis, the latest results crush any hopes that the 2022 Wrangler Unlimited will earn the agency’s Top Safety Pick — a good rating is required to secure the award.

Apart from tipping on its side, the Wrangler Unlimited performed well in the test. According to the IIHS, the safety cage surrounding the driver maintained its structure and the movement of the test dummy was well controlled. Those factors weren’t enough to overlook the partial rollover or warrant a good rating, however. The test showed a serious risk to the driver’s leg, and the side airbag intended to protect the head and torso failed to deploy.

The incident also highlights additional risks outside of IIHS’ evaluation, since the agency does not use a dummy on the passenger side. Because the Wrangler’s doors and roof are removable, occupants are even more vulnerable to the risks of a partial rollover since they’re more likely to be ejected from the vehicle if the doors or roof aren’t present.

This is not the first IIHS crash test the 2022 Wrangler Unlimited has failed in recent weeks: The SUV scored a marginal rating in the agency’s updated side-impact crash test due to a lack of rear side airbags, resulting in a poor rating for passenger head protection. The rear dummy’s head hit the vertical support of the vehicle’s roof and the window frame during the test. The Wrangler is not required by regulation to have side curtain airbags because of its removable roof.

It’s worth noting that following the improvements made after the 2019 results, the Wrangler Unlimited did not tip over in a test conducted by Stellantis and submitted by video to IIHS; it was only in the agency’s audit and follow-up test that the rollovers occurred. Previous models built prior to the 2018 Wrangler’s redesign did not experience the same issue: the 2017 Wrangler Unlimited scored a good rating in the test.
———
Hope you enjoy this video and leave your comment bellow. To stay up to date with alot of new Videos