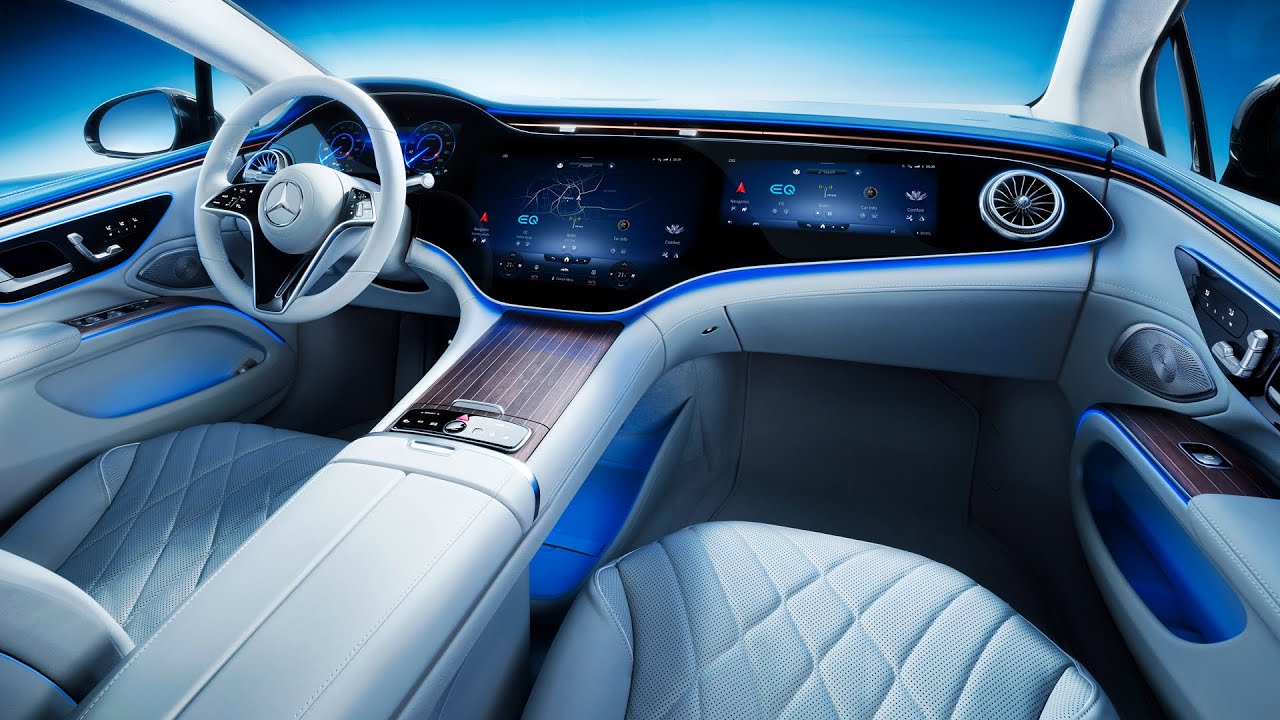 The future of Mercedes-Benz vehicles is almost here, arriving with the all-new 2022 Mercedes EQS. Despite not being the first EQ model to be introduced, the flagship EQS is the first model to be based on the company’s modular architecture for luxury and executive-class electric vehicles.

As such, designers at Stuttgart were given the liberty to create a totally fresh interior design and experience for the driver and occupants. The cabin’s production version is totally different from the EQS Concept.

The new MBUX Hyperscreen is at the forefront of that design evolution, presented by three large displays under a single scratch-resistant glass that covers the entire dashboard. Of note, the system utilizes eight CPU cores, 24 GB of RAM, and 46.4 GB per second RAM bandwidth.

Though not seen in the official images, the base model EQS not equipped with the MBUX Hyperscreen will have a different layout. Common on both, though, is the lack of a transmission tunnel.

Beyond the MBUX Hyperscreen, Mercedes said that the EQS is made to be experienced with virtually all human senses, namely visual, auditory, olfactory, and haptic. Yes, olfactory, as the EQS comes with High Efficiency Particulate Air (HEPA) filter that cleans and filter outside air entering the cabin. As part of the Air-Balance Package, the EQS has active fragrancing as well, which comes with a new fragrance called No.6 Mood Linen.

In terms of haptic perception, the MBUX Hyperscreen offers haptic feedback that uses force feedback on both the center and passenger displays. There are also 12 actuators located under the touchscreen surfaces, which can trigger a tangible vibration upon contact. Other elements in the cabin that excite the sense of touch are the materials used and knowing Mercedes, you know what to expect.

Obviously, the eyes are among the primary focus of the EQS’s interior design. Apart from the visual play on textures, a play on ambient lighting has been employed in the entire cabin. The door panels, on the other hand, are said to be borrowed from the interior design of modern living spaces. Interestingly, the needles on the digital gauges show a laser sword effect.

Auditory stimulation starts even before the driver and passengers enter the 2022 EQS, with sounds greeting them as they approach and enter the vehicle. Apart from the 15-speaker Burmester surround sound system, there are two soundscapes that come standard with the vehicle called Silver Waves and Vivid Flux, while driving sounds, which change depending on the driving mode and other dynamic inputs from the driver, are optional and produced by interior speakers.

More importantly, the EQS is available with soothing sounds called Forest Glade, Sounds of the Sea, and Summer Rain that can be selected during stop-overs to promote relaxation. In other words, Mercedes wants you to recharge your body as you recharge the EQS’s battery.

Speaking of charging, while not mentioned in the recent lengthy press release, Mercedes announced before that there will be 500,000 supported Mercedes Me Charge locations worldwide, including over 200,000 of those being in Europe. The EQS will also have a range of over 435 miles (700 kilometers) in the WLTP test.

The 2022 Mercedes EQS will be launched in Europe this August. We’ll know more details by then, but we know that it will be built alongside the S-Class and Maybach S-Class in the carbon-neutral “Factory 56” at the Sindelfingen plant.