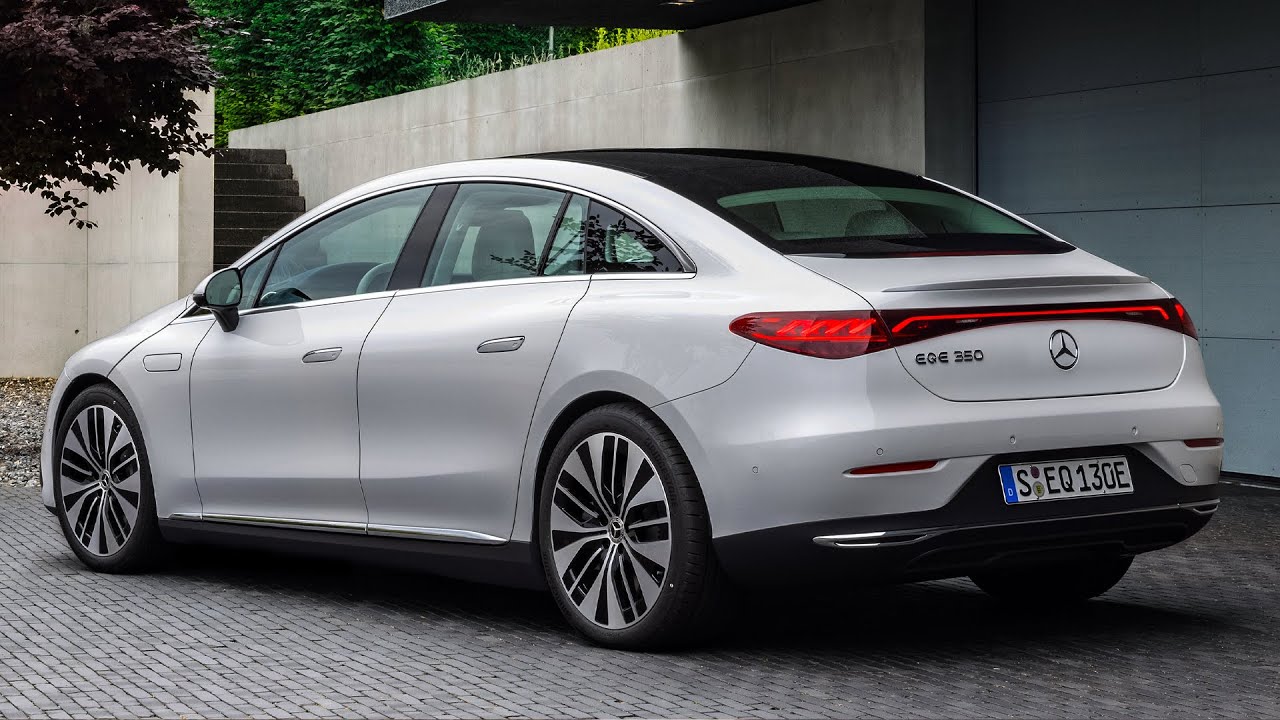 2022 Mercedes-Bnz EQE – High-tech electric luxury sedan. Yes, this really is the new 2023 Mercedes-Benz EQE 350 electric sedan. No, we didn’t accidentally use photos of the larger EQS. And yes, when the car was revealed at the 2021 Munich auto show, we had to look twice, too. With this new electric EQE, Mercedes is taking that baby S-Class thing to a whole new level.

For those who haven’t figured it out, Mercedes-Benz is following the same nomenclature for its electric cars as for its internal-combustion whips, with the EQ prefix appended. The EQE, then, is the battery-powered follow-on to the mid-level E-Class.

Dimensionally, the EQE is similar in exterior size to the current CLS, while interior measurements closely track those of the current E-Class, though with a notably higher seating position. Compared to the EQS which it so closely resembles, the new EQE is nearly 11 inches shorter (and half a foot narrower), though the wheelbase is only 3.5 inches shorter. The primary spotting difference between EQE and EQS is the shorter overhangs, and good luck spotting that from an oblique angle.

The similarities between the two electric sedans continue inside, especially if the EQE in question is equipped with the MBUX Hyperscreen feature, a three-display dashboard that stretches the width of the car and gives the appearance of one gigantic curved screen. (We haven’t yet seen what the non-Hyperscreen EQE will look like, but we’d be surprised if it’s much different from the two-screen version of the EQS.)

The EQE will launch with the EQE 350 model, powered by a single 288-hp electric motor geared to the rear wheels. (For those keeping track, that’s 41 fewer hp than the single-motor EQS 450+.) Adaptive air suspension and four-wheel steering are optional. Battery capacity is 90.6 kWh, from which Mercedes claims a range of 410 miles on the rather optimistic European WLTP cycle. EPA figures have not been published, but we expect a rating closer to 350 miles. This, of course, is only the beginning; as with the E-Class, Mercedes has several versions in the works.

As you would expect, the EQE 350 has a novel (and novel-length) list of standard available features. We’re tempted to reproduce the entire 52-page press release here—why should we suffer alone?—but instead we’ll give you the highlights: A Burmester stereo that provides piped-in driving “soundscapes” (with names like Silver Waves, Roaring Pulse, and Vivid Flux), electric-powered “comfort” doors that open and close themselves, an ambient lighting system suitable for a 1970s discotheque, a climate control system that will scrub the air inside the car before you get in, and a fingerprint sensor and facial recognition to identify the driver and enable his or her profile.

Of course, there are more mundane features available, such as a head-up display, massaging seats, a surround-view camera system, and the expected comprehensive suite of safety and driver-assistance feature, but why waste precious words on those? The EQE 350 is still a Mercedes, and we expect no less.

The 2023 Mercedes EQE 350 will arrive in U.S. dealerships next year, with pricing to be announced closer to launch.