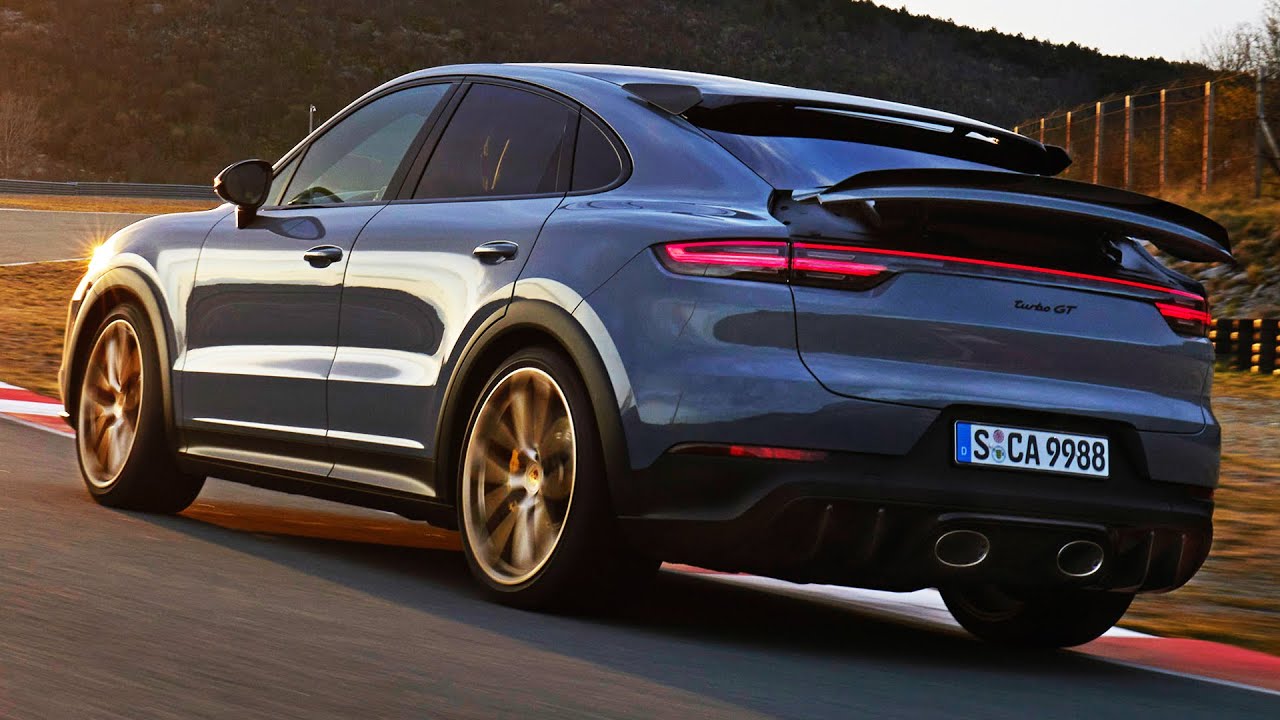 2022 Porsche Cayenne Turbo GT 631 Hp – SUPER-SUV Coupe. Porsche is stuffing a built twin-turbocharged 4.0-liter into the Cayenne Coupe, and it’s the most powerful V-8 the German automaker has ever produced. It makes 631 horsepower in this new Turbo GT model, and Porsche says its factory driver Lars Kern set a new SUV lap record at the Nürburgring Nordschleife in it lapping the 12.9-mile course in 7:38.9. The new Cayenne will arrive in the U.S, only in Coupe form, next year starting at $182,150.

The massaged V-8 engine produces 631 horsepower and 626 pound-feet of torque, 90 hp and 59 pound-feet more than the standard Turbo Coupe. Total output might be less than the Turbo S e-Hybrid’s 670 horses, but that powertrain uses an electric motor and a 14.3-kWh battery pack. This is solely the work of the internal-combustion engine. Porsche upgraded the V-8’s crankshaft, connecting rods, and pistons; enlarged the turbos’ compressor wheels; and increased the fuel injection flow rate and the intake and cooling systems’ airflow to make the additional power. The eight-speed automatic transmission also shifts quicker compared to other models, and the all-wheel-drive system’s transfer case is water cooled. Porsche claims that the Turbo GT will launch to 60 mph in 3.1 seconds, hit the quarter-mile in 11.6 seconds, and reach 186 mph. In our test, a 541-hp Cayenne Turbo reached 60 mph in 3.5 seconds.

Turbo GT models sit 0.3 inch lower than the now-mild Turbo, and Porsche’s adaptive dampers and Sport suspension, variable-ratio steering system, and rear-axle steering are all specifically tuned for the new model. Porsche’s active anti-roll bars are also retuned to further reduce body roll. The front wheels are 1.0 inch wider than the standard Turbo Coupe, and their negative camber is increased by half a degree. The 22-inch wheels are wrapped with sticky Pirelli P Zero Corsa tires that were specifically developed for the Turbo GT. Carbon-ceramic brakes are standard, with 17.3-inch front and 16.1-inch rear rotors.

Pictured here is a new color called Arctic Grey. The Turbo GT has wider air intakes up front with a revised front fascia and a carbon-fiber rear diffuser. The GT has a carbon-fiber roof and an upper rear wing with carbon-fiber side plates and an adaptive rear spoiler with a Gurney flap that’s twice the size of the standard Cayenne Turbo Coupe’s. Porsche’s titanium sport exhaust system with the center muffler removed is standard on the Turbo GT, and it exhales through center-mounted dual exhaust tips.

This new high-performance Cayenne is the first one to feature Porsche’s new infotainment system, which now has Android Auto capability along with Apple CarPlay. In the Turbo GT, Porsche’s eight-way sport front seats and two sport rear seats have Turbo GT–specific Alcantara inserts and Turbo GT script on the headrests. There’s either bronze or Arctic Grey stitching and a yellow marker line atop the steering wheel.

The 2022 Porsche Cayenne Coupe Turbo GT is available to order now starting at $182,150, making it significantly more expensive than other German super SUVs such as the 617-hp BMW X6 M and 603-hp Mercedes-AMG GLE 63S, but it’s more powerful. And it’s only 10 horsepower behind the $222,004 Lamborghini Urus. The new Porsche will arrive in the U.S. early next year.