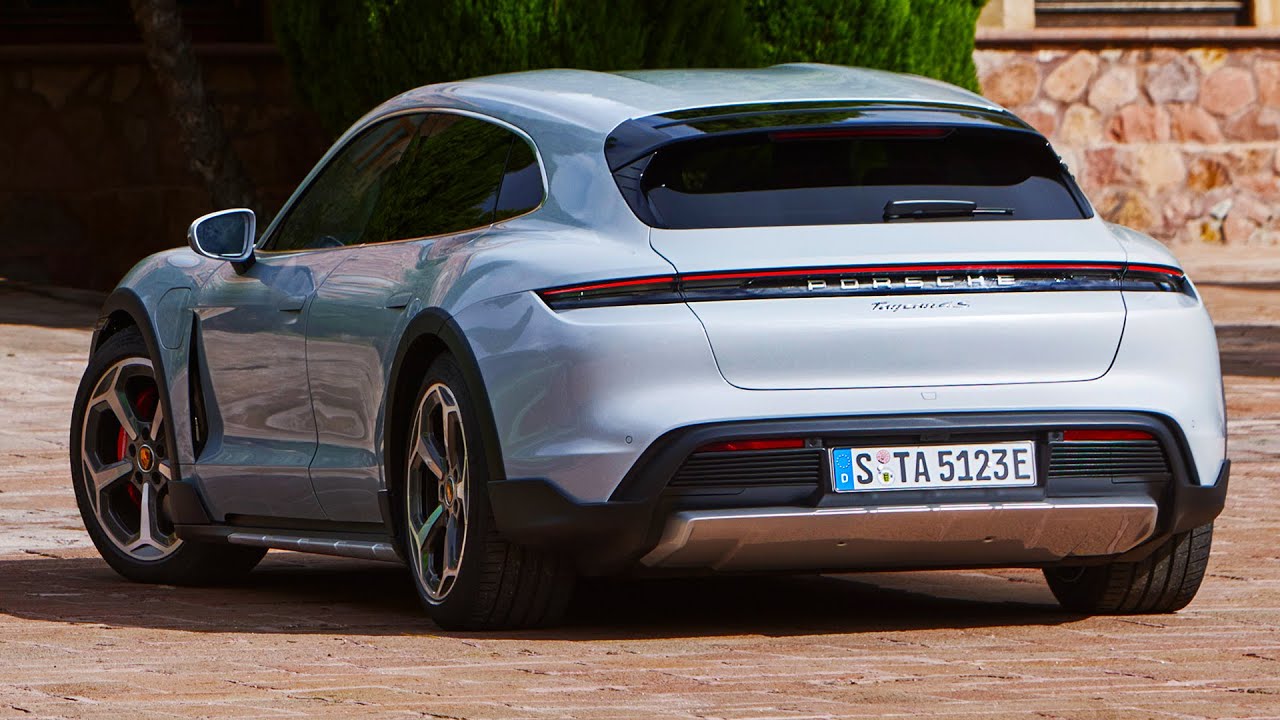 2022 Porsche Taycan Cross Turismo – a luxurious high performance wagon. Porsche’s new Taycan Cross Turismo is a lifted, wagon version of its electric sedan with body cladding and SUV aspirations, much like the Audi A6 Allroad and the Mercedes-Benz E450 All-Terrain. It will be available in the U.S. in the summer of 2021 in 4, 4S (pictured above), Turbo, and Turbo S (pictured below) models. The Cross Turismo costs $1530 more than a comparable Taycan sedan, starting at $92,250 for the entry-level model and stretching to $188,950 for the Turbo S.

All-wheel drive is standard on the Cross Turismo, unlike the available rear-drive version of the sedan. All Cross Turismos also get the larger of the Taycan’s two battery packs, what Porsche calls Performance Battery Plus and holds 83.7-kWh of usable energy, and two permanent-magnet synchronous motors that generate a combined 469 horsepower in the Taycan Cross Turismo 4, 562 in the 4S, 670 in the Turbo, and 750 hp in the Turbo S. These are the same outputs as the equivalent sedans, and the 4 is on par with the base Taycan sedan with the bigger battery. Porsche says the Turbo S Cross Turismo will reach 60 mph in 2.7 seconds, though we managed 2.4 seconds in the sedan in our testing.

Range estimates will be announced closer to the Taycan Cross Turismo’s summer arrival, but with the bigger battery, the 2021 Taycan 4S sedan is now EPA rated at 227 miles, while we achieved 180 miles in our 75-mph test. EPA estimates on the 2021 Taycan Turbo and Turbo S haven’t been released, but the 2020 models were rated at 201 and 192 miles. The Cross Turismo’s range mode lowers the cars 0.8 inch, but we can expect its range estimates to be slightly lower across the board due to its higher ride height in all other modes and almost 100 extra pounds of curb weight compared to the sedans.

Porsche’s adaptive dampers and an air suspension are standard on all models and make the Taycan Cross Turismo ride 0.8 inch higher than the sedan. A Gravel drive mode increases ride height another 0.4 inch. An optional off-road design package gives the Cross Turismo the extra ride height of Gravel mode all the time, and adds unique front and rear fascias, even more body cladding, and side skirts (as pictured above). A roof rack and a rear-mounted bike rack will also be available from Porsche.

The Taycan Cross Turismo’s longer body allows for slightly more headroom compared to the sedan, and it comes standard with a panoramic glass sunroof. The rest of the interior is akin to the sedan: 16.8-inch digital gauge cluster, a 10.9-inch touchscreen with an 8.4-inch touchscreen below it for climate and other controls, and an available passenger display.

And, of course, there’s more cargo space compared to the sedan, but not a lot more. The Taycan 4 and 4S Cross Turismo have 16 cubic feet of cargo space with the seats up, compared to the 14-cubic-foot trunk of the sedan. However, the Cross Turismo’s 43 cubic feet of cargo space with the seats down is 8 more than the Mercedes E450 All-Terrain wagon. The Turbo and Turbo S models have 1.5 less cubic feet of space, and that’s because, as Porsche told Car and Driver, because a Bose sound system, which has hardware in the trunk, is standard on the top two models. Additionally, the Taycan’s 2.9-cubic-foot frunk remains. Still, there are electric crossovers with considerably more cargo space, including the Tesla Model Y with its 68 cubic feet of maximum storage. Perhaps the coming electric Macan will be able to better compete in this regard.

Additionally, Porsche is offering two new electric bicycles to go with the Taycan Cross Turismo: the eBike Sport for street use, and the eBike Cross for the trails. They’ll be on sale, in three sizes, in the spring.