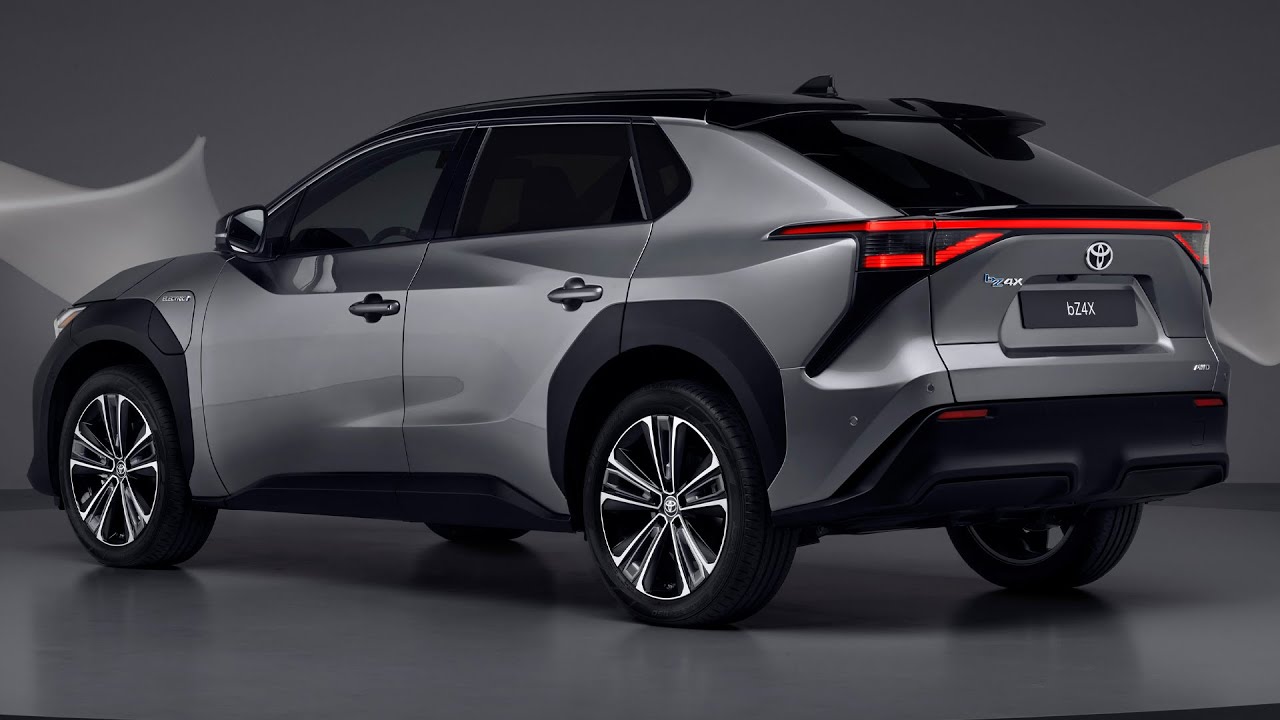 2022 Toyota bZ4X – Exterior and Interior Walkaround. This is the Toyota bZ4X, the first battery-powered car Toyota has built that isn’t also available with a petrol engine or hybrid system.

It’s an electric SUV developed in collaboration with Subaru, and will take on the likes of the Ford Mustang Mach-E and VW ID4 when it reaches showrooms in 2022.

Design
Its name might sound like it came from Elon Musk’s ‘Big Book of Baby Names,’ but the Toyota bZ4X is a very important car for the Japanese brand because it’s the first electric-only car it’s ever built.

It gets thin headlights up front and a smooth bumper that’s flanked by a few air ducts and intakes, with the side profile strongly reminiscent of the current Toyota Rav4. You’ll be able to spec up to 20-inch alloy wheels, too.

The back of the car features angular details and double-stacked LED brake lights similar to those on the Toyota Prius.

Interior
Such is the trend of EV SUVs, the interior of the Toyota bZ4X is pretty minimalist. You get a 7-inch digital driver’s display directly in your eye line, along with a 12-inch touchscreen infotainment system with voice commands.

Toyota has claimed the feel of the interior is akin to a living room as well. The cabin has a light and airy feel to it, and there are plenty of soft looking materials in the drivers eye line.

Toyota has also revealed that a “steer-by-wire” system will be introduced at a later date, which would include the addition of a Tesla-esque steering yoke.

Exact UK specs have yet to be detailed, but a panoramic glass roof looks set to join the options list. The Toyota bZ4X has 452 litres of boot space.

Batteries, motors and driving
Two versions of the Toyota bZ4X will be available at launch — one with front-wheel drive and another with four-wheel drive.

The former has a single motor which produces out 201hp and 256Nm of torque, with the latter chalking up 215hp and 336Nm of torque from a dual motor set-up. Each will crack the 0-60mph sprint in 8.4 and 7.7 seconds respectively, with both hitting a 100mph top speed.

All versions of the new Toyota bZ4X have 280 miles of range, along with an advanced heating system which maintains the battery at low temperatures. It also has 150KW fast charging capability which can get the battery to 80% charge in half an hour.

The bZ4X’s all-wheel-drive system was developed jointly with Subaru, and Toyota claims it has class leading off-road ability. It will also wade through water up to 500mm.

A solar panel on the roof of the bZ4X can harness power from the sun to charge the batteries, and this can give up to 1,110 miles of range per year.

Price and release date
The new Toyota bZ4X is set to go on sale from early 2022 from new bZ Hubs set up in Toyota dealers. You’ll be able to get lease deals which bundle the car, maintenance, insurance and a home charger in one monthly price.

Pricing hasn’t been announced yet, but expect a figure close to £35,000.