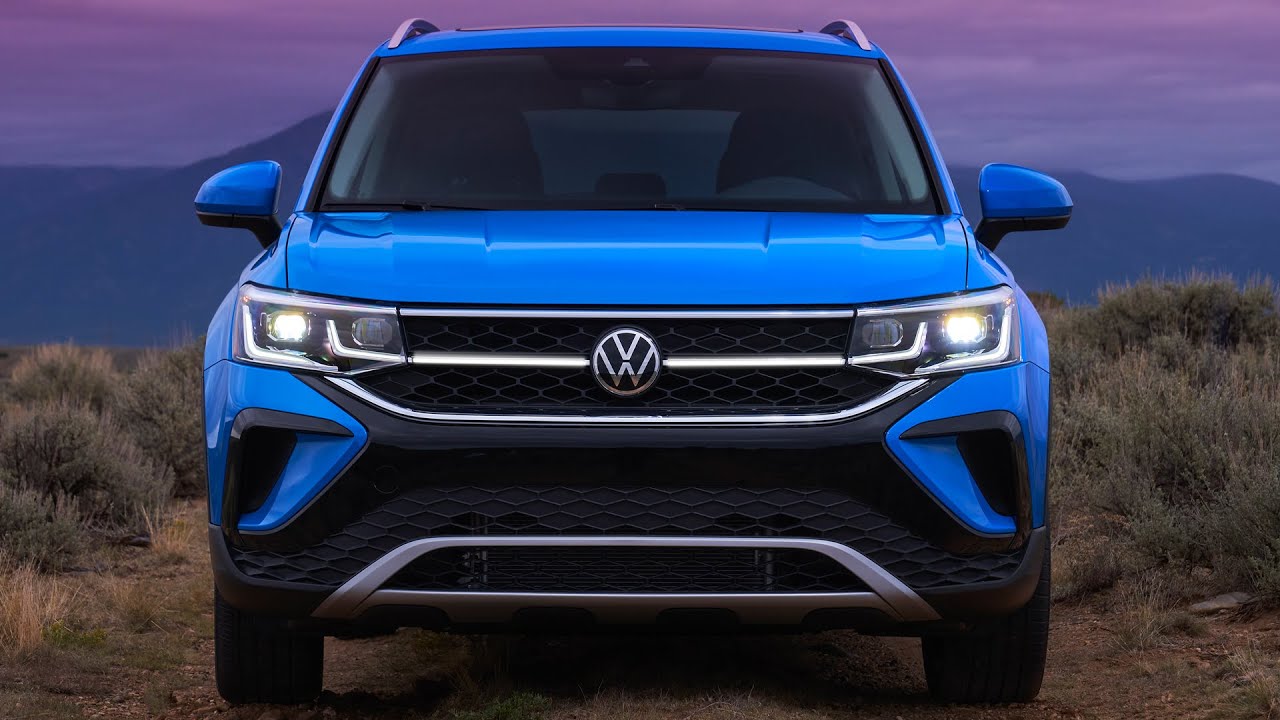 2022 Volkswagen Taos – A New Small SUV to rival the Crosstrek and CX-30. Volkswagen is expanding its crossover lineup with the compact 2021 VW Taos. Although it is instantly recognizable as a Volkswagen with plenty of styling cues shared with the Tiguan and Atlas Grand Sport, the Taos gets VW’s new horizontal LED lighting strip across its grille on the range-topping SEL (see the ID.4) plus a variety of pseudo rugged styling flourishes on every trim. These include black plastic lower cladding and fender flares, raised roof rails, and alloy trim on the front and rear bumpers that mimic skid plates. Besides serving as an obvious point of difference with the more traditional, family-friendly Tiguan, this more rugged look is the telltale sign that the Taos was designed specifically for the North American market where outdoorsy-themed models like the Subaru Crosstrek and Toyota RAV4 Adventure are booming.

Volkswagen’s flexible MQB architecture underpins the Taos, which stretches 175.8 inches from end to end, 72.5 inches wide, and 64.4 inches tall. For context, it’s about 9.3 inches shorter than a Tiguan, and only a couple inches longer than the growing list of “in-betweener” crossovers that bridge the gap between subcompact and compact choices. These include the Kia Seltos, Chevy Trailblazer and Jeep Compass. Its cargo capacity is consistent with those, too, as there is 28.1 cubic feet with five adults on board and 66.3 cubes with the second-row seats folded flat. Back seat legroom is 37.9 inches.

From the driver seat, horizontal lines on the dashboard emphasize the crossover’s width, and the basic layout looks familiar if you’ve seen the most recent Volkswagen Jetta. A 6.5-inch touchscreen is standard on the base Taos S, while the SE SEL get an 8-inch unit running Volkswagen’s latest MIB3 infotainment system. Every Taos also gets an all-digital instrument panel measuring either a standard 8 inches or 10.25 inches on the range-topping SEL.

Volkswagen notes that the Taos is “available” with the IQ.DRIVE package of electronic driving aids, including forward collision warning, automatic emergency braking, lane-keeping assist, blind-spot warning, and adaptive cruise control with stop-and-go capability. Of course, “available” means that those features are optional, whereas most competitors at least include forward collision warning and automatic braking as standard equipment.

As we’ve already reported, the Taos uses a fuel-sipping evolution of the Jetta’s 1.4-liter turbocharged engine. Enlarged to 1.5 liters and modified to run a modified Miller cycle, the new four-cylinder produces 158 horsepower and 184 pound-feet of torque. It spins the front wheels via an eight-speed automatic transmission in its standard configuration, while the optional 4Motion all-wheel-drive system brings with it a seven-speed dual-clutch automatic as well as a more sophisticated multi-link rear suspension. The front-drive Taos has a torsion beam at the back.

Despite the rugged look, the Taos shouldn’t be considered for anything but the lightest of off-road duty. Volkswagen didn’t specify ground clearance, but it doesn’t look especially lofty. The company did indicate, however, that it is still considering a more capable trim level along the lines of the Toyota RAV4 Adventure or Jeep’s Trailhawk trims.

Built in Puebla, Mexico, along with the Jetta and Tiguan, the 2022 Volkswagen Taos will arrive in showrooms in the summer of 2021. Buyers will initially have three trim levels named S, SE, and SEL, respectively, to choose from. Pricing information will be announced closer to the crossover’s on-sale date, but Volkswagen indicated during a presentation to journalists Friday that we can expect it to start around $3,000 less than the Tiguan, give or take a few hundred dollars. That would put the starting price around $22,000, and therefore inline with the Kia Seltos, Subaru Crosstrek and Jeep Compass.

As for the name, the Taos follows the Tiguan and discontinued Touareg as Volkswagen crossovers with T names that are difficult to pronounce (Atlas is the non-T outlier). While the Touareg was named after a nomadic North African people and Tiguan is the combination of the words “tiger” and “iguana” (seriously, that isn’t a joke), the name Taos is borrowed from a picturesque small town in northern New Mexico and is pronounced like “house.”