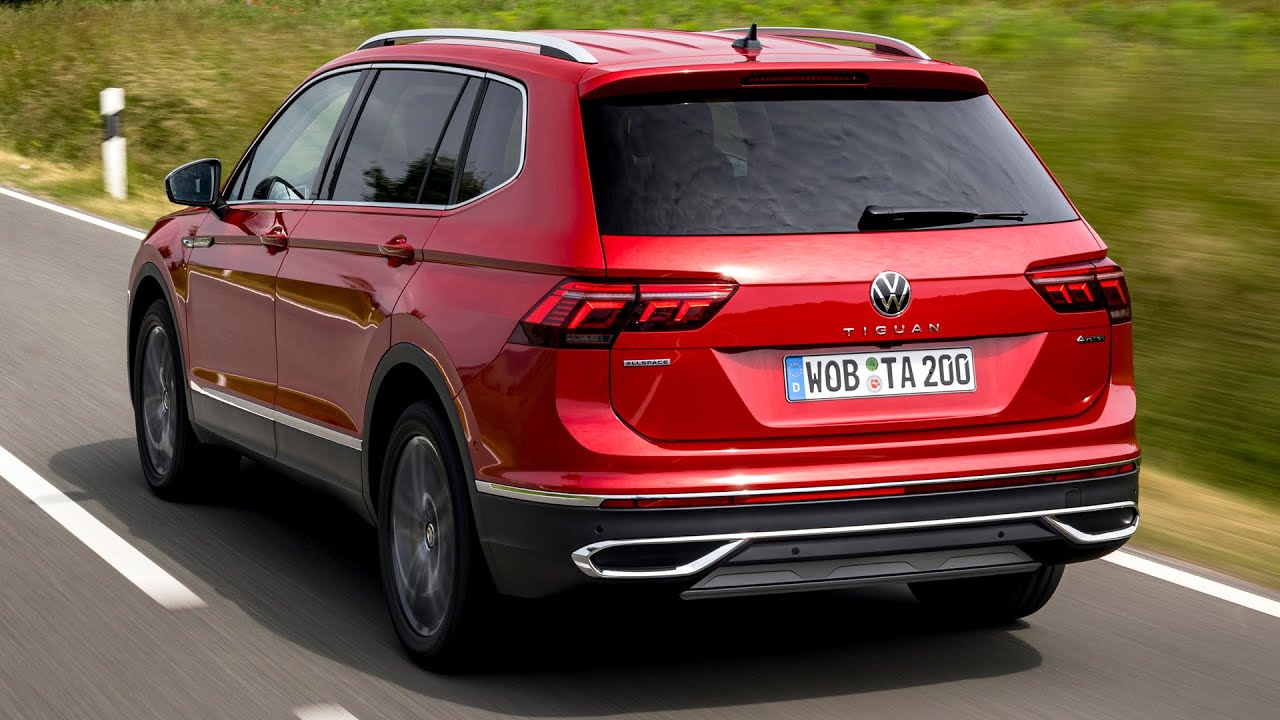 The revised Tiguan Allspace is available to order in the UK now, with prices starting from £32,135 for the cheapest Life model. First deliveries are due to arrive in October.

Volkswagen has also simplified the Tiguan Allspace’s line-up as part of the update. Now, buyers are offered the brand’s familiar Life, Elegance and R-Line specifications, rather than its outmoded SEL, SE Nav and Match trims.

Comfort-biased Elegance cars start from £36,740. Upgrades over the base-model include 19-inch alloy wheels, Matrix LED headlamps, model-specific bumpers, a panoramic glass sunroof and a light strip for the radiator grille which spans the gap between the headlights.

Inside, there’s Art Velours seat upholstery, a 30-colour customisable ambient lighting system and a reversing camera feed for the infotainment system. There’s also a host of convenience features such as keyless entry, a hands free tailgate and park assist.

The sporty Tiguan Allspace R-Line is priced from £36,710 and gets 20-inch alloy wheels, more aggressive front and rear bumpers, sports suspension and a larger tailgate spoiler. The cabin gets stainless steel pedals and sports seats, embroidered with Volkswagen’s “R” logo.

Inside, the updated Tiguan Allspace gets new seat covers, new door panels and new climate controls, with touch sensitive sliders and digital displays in place of the old car’s rotary knobs and buttons. Volkswagen’s latest MIB3 infotainment system makes an appearance, too, with either an eight-inch or optional 9.2-inch screen.

Elegance and R-Line models also benefit from Volkswagen’s Travel Assist level 2 driver assistance technology, which can assume control of the car’s steering, throttle and brakes on the motorway at speeds of up to 130mph, providing the driver keeps their hands on the wheel. When fitted with an automatic gearbox, the system will even work from a standstill.

The Allspace’s wheelbase is 110mm longer than the standard Tiguan’s which liberates some extra rear legroom and increases the SUV’s maximum boot capacity from 1,655 litres to 1,920 litres. It also has a towing weight of up to 2.5 tonnes.

The more expensive variant has the same 242bhp output as the Volkswagen Golf GTI and is only available in the company’s sporty R-Line trim. It’s priced from £42,765 and drops the SUV’s 0–62mph time to 6.2 seconds, while increasing its top speed to 142mph.

Buyers can also choose from two diesel options, both of which are based on the same turbocharged 2.0-litre four-cylinder unit. The cheaper version has a starting price of £34,380 and a power output of 148bhp – and it’s available with a six-speed manual gearbox on the entry-level Tiguan Allspace Life.

The same engine can also be specified with a seven-speed automatic gearbox for £36,035 or an automatic gearbox and four-wheel drive for £37,955. The most efficient manual version has a claimed fuel economy figure of 53.3mpg and CO2 emissions of 140g/km.

Elegance and R-Line models can have a 197bhp version of the 2.0-litre diesel, with prices starting from £42,855 and £43,165 respectively. Both come with four-wheel drive and a seven-speed automatic gearbox as standard.

The R-Line model is the most efficient model of the two, with a claimed fuel economy figure of 42.2mpg and CO2 emissions of 175g/km. Elegance models can manage 40.9mpg and 180g/km of CO2 – although both cars have the same 7.8 second 0–62mph time.

Volkswagen has also said that it could introduce an e-Hybrid version of the Tiguan Allspace, which would use the same 242bhp turbocharged 1.4-litre four-cylinder petrol engine and electric motor as the Mk8 Golf PHEV.

However, the Tiguan R’s 316bhp 2.0-litre petrol engine won’t make it into the Allspace, as Volkswagen says the long-wheelbase model’s focus is on “long distance driving capability” rather than outright performance.