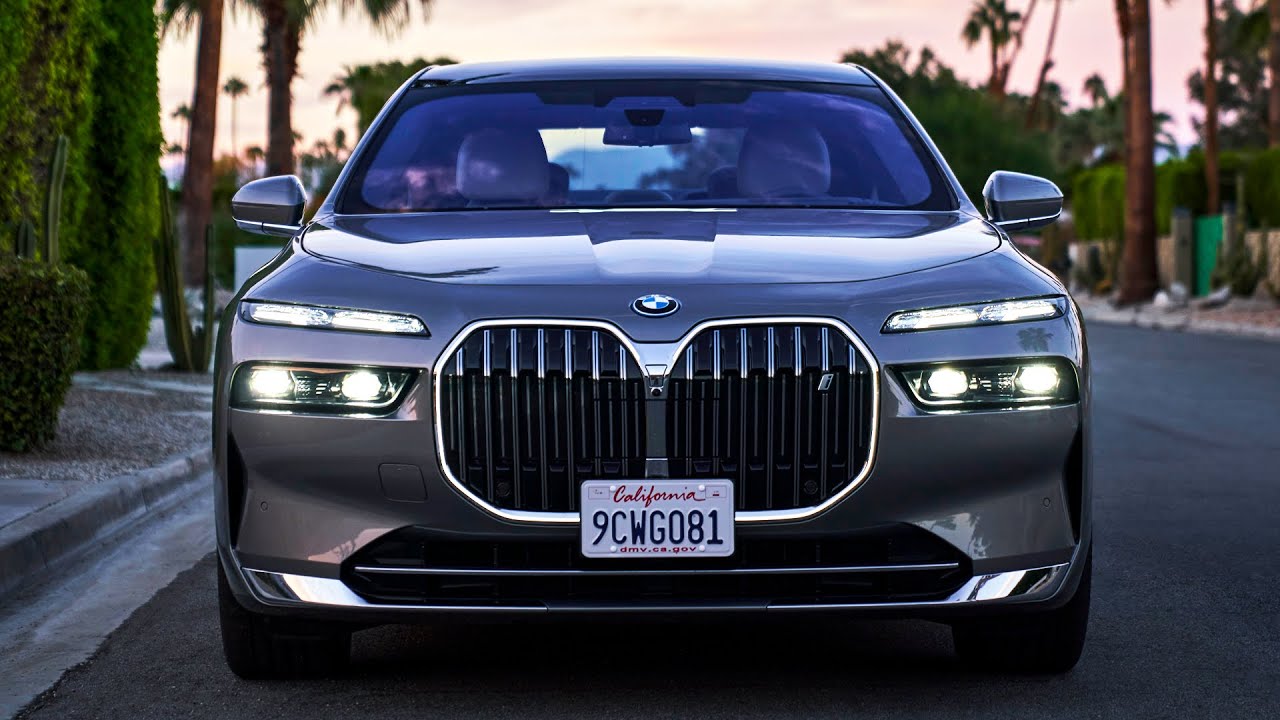 2023 BMW i7 xDrive60 – The flagship Electric 7-Series to fight Mercedes-EQS. This is the new BMW 7 Series. No, it’s not a concept car or a design study – This is what BMW’s brand-new alternative to the Mercedes S-Class and Audi A8 actually looks like.

The design isn’t the only shocking thing about the new 7 Series – you’ll also be able to get a pure electric version called the i7 that could tempt you away from the likes of a Mercedes EQS.

Price and specs
The new BMW 7 Series costs from £102,305 and is available in three different trim levels: Excellence, M Sport and the range-topping M760e.

New BMW 7 Series Excellence
The Excellence is the entry point into the 7 Series range, and it’ll set you back from £102,305. For this, you get 19-inch alloy wheels, adaptive LED headlights, a panoramic glass roof and soft-close doors.

Inside, all cars get the latest iDrive infotainment system with a large curved display, a Bowers & Wilkins sound system, four-zone climate control and heated seats.

Beyond this, standard equipment remains the same as the Excellence model. You do get a three-spoke flat-bottomed steering wheel inside, as well as some different trim options, however.

New BMW 7 Series M760e
Being the performance model, the M760e gets 21-inch alloy wheels as standard as well as bigger exhaust surrounds and larger air intakes in the bumpers. You’re mainly paying for the added performance though (more on this later). This range-topping car costs £117,555.

New BMW i7 price and specs
The all-electric BMW i7 is available in either Excellence or M Sport trim. Go for a new BMW i7 in Excellence trim and you’ll have to part with £108,305, while the sporty-looking M Sport will set you back £112,805.

Equipment levels are the same as the petrol-powered 7 Series, so you get a panoramic glass roof, heated seats, four-zone climate control and 19-inch alloy wheels as standard.

Engines and performance
The BMW 7 Series will come with 6 different petrol and diesel engines, all fitted with an 8-speed automatic gearbox and some form of hybrid system.

Rear-wheel-drive 735i models use a turbocharged 3-litre 6-cylinder engine and a mild-hybrid system to produce 286hp. There’s also a more powerful rear-wheel-drive 740i version with 380hp.

If you need even more oomph, there’s a 4-wheel-drive 760i that uses a mild-hybrid system and a twin-turbo 4.4-litre to make 544hp. However, none of these cars will go on sale in the UK.

Instead, our BMW 7 Series range kicks off with the 4-wheel-drive 740d with a twin-turbo 3-litre straight-6 diesel engine featuring a mild-hybrid system. It makes 300hp and does 0-60mph in 6.3 seconds

If that doesn’t sound fast enough, there’s also the 4-wheel-drive 750e hybrid. This uses a 310hp 3-litre straight-six petrol engine and a 200hp electric motor to deliver 490hp and cover the 0-60mph sprint in 4.9 seconds.

The 750e and M760e plug-in hybrids can drive for around 50 miles on electric power alone, according to the latest WLPT tests.

Batteries and range
There’s only one version of the i7 so far. It’s called the i7 xDrive 60. It has a 102kWh battery that gives you up to 388 miles of range.

The BMW i7 is compatible with 195kW fast charging, which is slightly slower than the 200kW in the Mercedes EQS, but it’s enough to give you an extra 106 miles of range in about 10 minutes.

BMW i7 motors and performance
The i7 60 comes with dual motors that produce 544hp combined. That’s about 20hp more than you get in a Mercedes EQS 580.

This means it’ll do 0-60mph in 4.7 seconds. That’s a few tenths of a second slower than the Mercedes, which will do it in 4.3 seconds.

BMW has confirmed it’ll build a much quicker i7 M70. It’ll have 660hp and 1,000Nm of torque, making it the most powerful BMW road car EVER. Expect it to do 0-60mph in comfortably less than 4 seconds.
New BMW 7 Series and i7 price and release date

Petrol, diesel and plug-in hybrid versions of the 7 Series will go on sale in Spring 2023. BMW hasn’t confirmed how much they’ll cost.

TIMELINE:
Night Driving 00:00
Exterior Design 01:36
Interior Design 04:02
Driving Scenes 06:54
———
Hope you enjoy this video and leave your comment bellow. To stay up to date with alot of new Videos