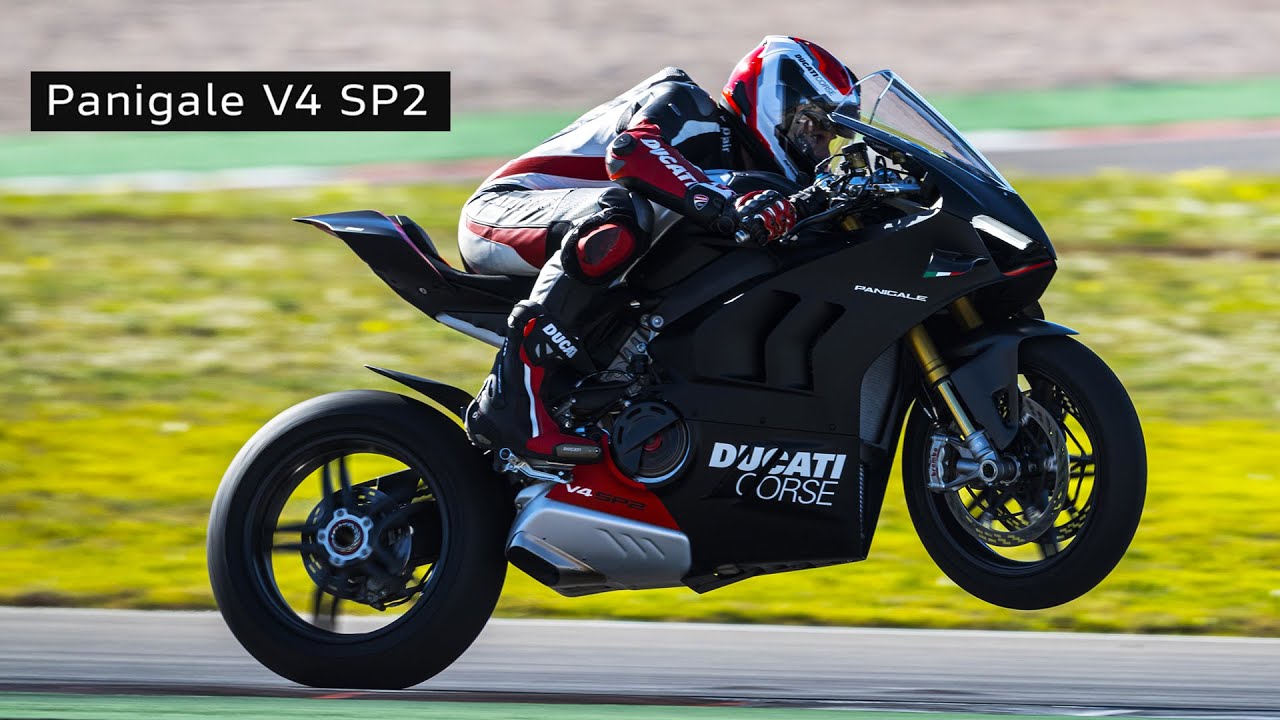 2023 Ducati Panigale V4 SP2 – The Ultimate Super Sports Bike. Ducati wrapped up a months-long campaign of introducing new models by unveiling the 2023 Panigale V4 SP2. Developed with track use in mind, it’s an evolution of the Panigale V4 that benefits from numerous upgrades that have trickled down from the firm’s racing program.

“SP” stands for Sport Production, and engineers made the Panigale V4 worthy of these initials by improving the motorcycle’s aerodynamics, ergonomics, engine, chassis and electronics. Power comes from a 1.1-liter Desmosedici Stradale V4 engine, which is tuned to develop 210 horsepower at a screaming 12,500 rpm and 91 pound-feet of torque at 11,100 rpm. Derived from the company’s MotoGP program, the mill features gear-specific torque curves and four power modes called Full, High, Medium and Low, respectively. Full and Low are new.

The 210-horsepower output is impressive, especially considering the V4 SP2 tips the scale at 381 pounds. Riders can also order an optional titanium exhaust system developed with Akrapovič. It increases horsepower and torque to 228 and 97, respectively, and it reduces the SP2’s weight to 370 pounds. Put another way, in this configuration the V4 SP2 weighs 75 pounds less than Ford’s 5.0-liter Coyote V8 engine.

Ducati fitted the gearbox with a dry clutch disc and a lighter final drive. The electronically-controlled suspension system comes from Öhlins, the brakes are provided by Brembo, and the five-spoke carbon fiber wheels are about three pounds lighter than comparable forged units.

Most of the visual changes were made to improve function rather than form. For example, the tip of the brake and clutch levers are milled to reduce air resistance. The brushed-aluminum fuel tank is exposed, and the SP2 is only available in flat black with red accents.

Technology is part of the package as well. Ducati notes that the instrument cluster borrows a display mode called “Track Evo” from MotoGP motorcycles. When this mode is engaged, the tachometer moves to the highest part of the screen, the driving aids are grouped on the right side of it so that the rider can see precisely what’s engaged at any given moment, and racing-specific information (like the speed and the number of laps completed) is presented on the left. Every SP2 also comes with a GPS module that includes a lap timer and the Ducati Data Analyzer, which sounds a lot like Chevrolet’s Performance Data Recorder. It lets users record parameters while racing to analyze them later.

Ducati dealers across the United States will begin taking orders for the 2023 Panigale V4 SP2 halfway through 2022, and deliveries will start before the end of the year. Pricing is set at $39,500. Expensive? Just a little, yes: for context, the Panigale V4 carries a base price of $23,295. However, getting this level of performance and track-bred technology in a car would require spending at least a six-digit sum.