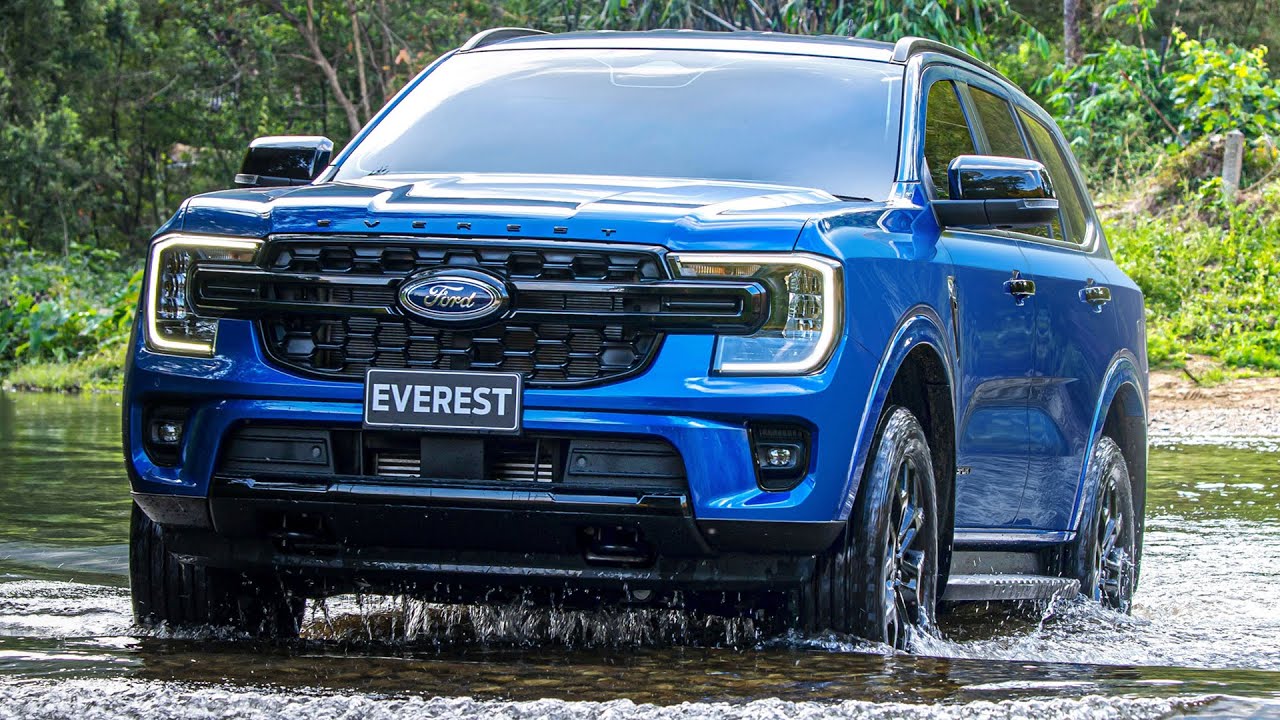 2023 Ford Everest Reveal – Features, Design, Interior and Off-road Driving. The third-generation Everest comes at a time when ladder-frame SUVs are growing in popularity. Based on the 2022 Ranger, the adventurous three-row family hauler benefits from the same novelties introduced with the midsize truck. It has wider tracks (+50 mm / 1.97 inches) for better on-road stability along with tweaks to the dampers for improved off-road capabilities.

As expected, the styling takes after its Ranger cousin with a nearly identical front fascia. The switch from a pickup body to an SUV has brought longer rear doors for improved access to the rear seats. As for the taillights, they’re much wider than those of the truck and flank a wide bar on the tailgate incorporating the “Everest” lettering.

Massive changes have occurred inside the three-row “sanctuary” as billed by Ford where the new Everest gets the SYNC 4 infotainment. The portrait-oriented touchscreen measures 10.1 inches on the lesser trim levels and is bumped to a 12-inch diagonal for the more expensive models. It’s the same story with the digital instrument cluster, with 8- and 12.3-inch sizes depending on the version.

The engine lineup includes the usual suspects, with a turbodiesel 3.0-liter V6 positioned at the top. Depending on the market, the revamped Everest will be offered with a smaller 2.0-liter diesel equipped with one or two turbochargers. If oil-burners are not your cup of tea, the body-on-frame SUV will also be offered from 2023 with the familiar 2.3-liter EcoBoost gasoline unit. Depending on the engine, these work with either a six-speed manual or a 10-speed automatic.

Ford touts water wading capabilities up to 800 mm (2.6 feet) while the roof can hold static loads of 350 kg (772 lbs) or dynamic loads as heavy as 100 kg (220 lbs). Interestingly, the engine bay has room for a second battery to juice up various aftermarket accessories to accentuate the Everest’s outdoorsy character.

From a 360-degree camera and matrix LED headlights to adaptive cruise control and lane-keeping assist, the 2023 Ford Everest is brimming with tech. The Blue Oval has also implemented an automatic evasive steer assist to avoid a collision in case braking alone isn’t enough. If an accident does occur, post-collision braking kicks in to avoid a secondary crash.

Being a large SUV (well, at least for someone used to European SUVs), future owners will be glad to hear the Everest can park itself. In addition, it can also drive you out by relying on the all-around cameras and the parking sensors at the front and rear. The blind spot supports trailers up to 10 meters (32.8 feet) long and 2.4 meters (7.9 feet) wide.

Going on sale later this year, the RWD-based Ford Everest will be offered in Sport, Titanium, and Platinum trim levels, with additional versions planned depending on the region. The previous generation was also sold in India as the Endeavour. Fun fact – the French military uses a light-duty tactical vehicle as a personnel carrier based on the second-gen Everest known as the Arquus Trapper VT4.