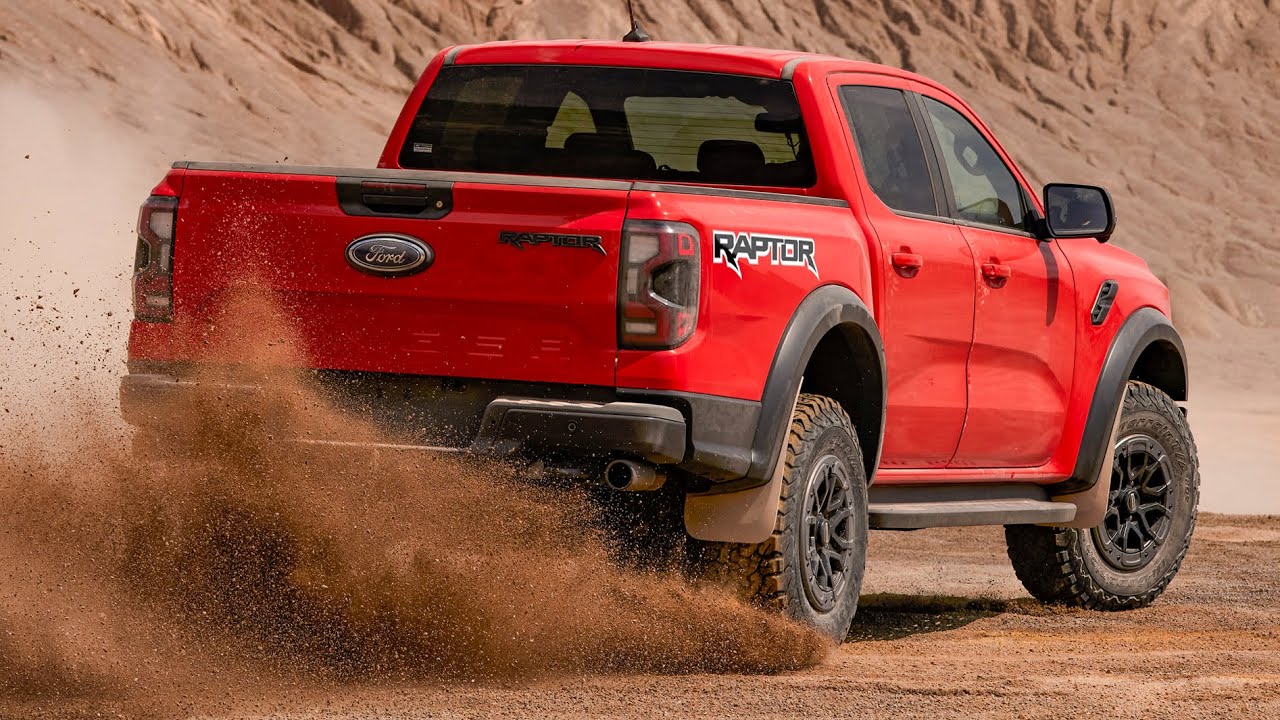 Ford introduced the Ranger Raptor in Europe in August 2018 and now it’s already replacing the brawny truck with the next-gen model. The rumors were true as the midsize pickup is indeed getting a larger 3.0-liter V6 EcoBoost. It’s not making the full-fat 400 horsepower available in the Explorer ST, but it still packs plenty of punch for this segment.

The twin-turbo mill has been detuned to 288 hp and 491 Nm (362 lb-ft), which means it’s down on torque by 53 lb-ft (72 Nm) compared to the performance SUV. Nevertheless, these are some healthy numbers considering the old Ranger Raptor with its EcoBlue engine had 210 hp and only a bit more torque, at 391 lb-ft (500 Nm). As before, the output is channeled to the road via a ten-speed automatic transmission.

Should you prefer the low-end muscle delivered by an oil-burner, Ford has got you covered. The Ranger Raptor with the diesel will still be offered. Sticking with the gasoline unit will get you anti-lag technology adapted from the GT supercar and Focus ST hot hatchback. It keeps the pair of turbos spinning for up to three seconds in case you want to push the truck hard shortly after taking your foot off the accelerator pedal.

As you would expect from a Raptor, the range-topping Ranger gets a sturdier suspension for better go-anywhere capabilities. The off-roader boasts beefier aluminum upper and lower control arms together with an upgraded Watt’s link system at the back. The Blue Oval is installing FOX 2.5-inch shocks halving friction compared to the previous generation.

Needless to say, there’s significantly more suspension travel compared to the standard Ranger along with a 25 percent increase in damping force to better iron out shocks. Reserved for the Raptor version, reinforcements to the C-pillar, cargo area and spare tire have been made. In addition, Ford has toughened up the mounts for the shock pads, front shock tower, and rear shock bracket.

The 2023 Ford Ranger Raptor for Europe gets a permanent four-wheel-drive system with an on-demand electronically controlled two-speed transfer case. There are locking differentials at the front and rear along with seven selectable driving modes: Normal, Sport, Slippery, Rock Crawl, Sand, Mud/Ruts, and Baja.

It also gets the Trail Control off-road cruise control system, which works at speeds of up to 20 mph (32 km/h). Those muscular fenders host 17-inch wheels wrapped in all-terrain tires and the back features a sporty exhaust with adjustable flaps to modify the soundtrack on the fly. LED matrix headlights are standard equipment, much like the functional air intakes and aluminum side steps.

The interior is home to sports seats Ford says have been designed with inspiration from jet fighters, while Code Orange accents spruce up the cabin. Magnesium shift paddles are exclusive to the Raptor, which also gets a 10-speaker B&O sound system. The driver has a 12.4-inch digital instrument cluster accompanied by a 12-inch vertical touchscreen with SYNC 4 and wireless support for Android Auto and Apple CarPlay.

Ford will kick off customer deliveries of the new EcoBoost-powered Ranger Raptor in Europe by late summer, with the diesel to follow next year. No word on US availability just yet, but a recent report indicates that production of the standard truck at the Michigan factory will start in May 2023. It’ll supposedly have an eight-year life cycle in North America where the diesel Raptor is unlikely to be offered.