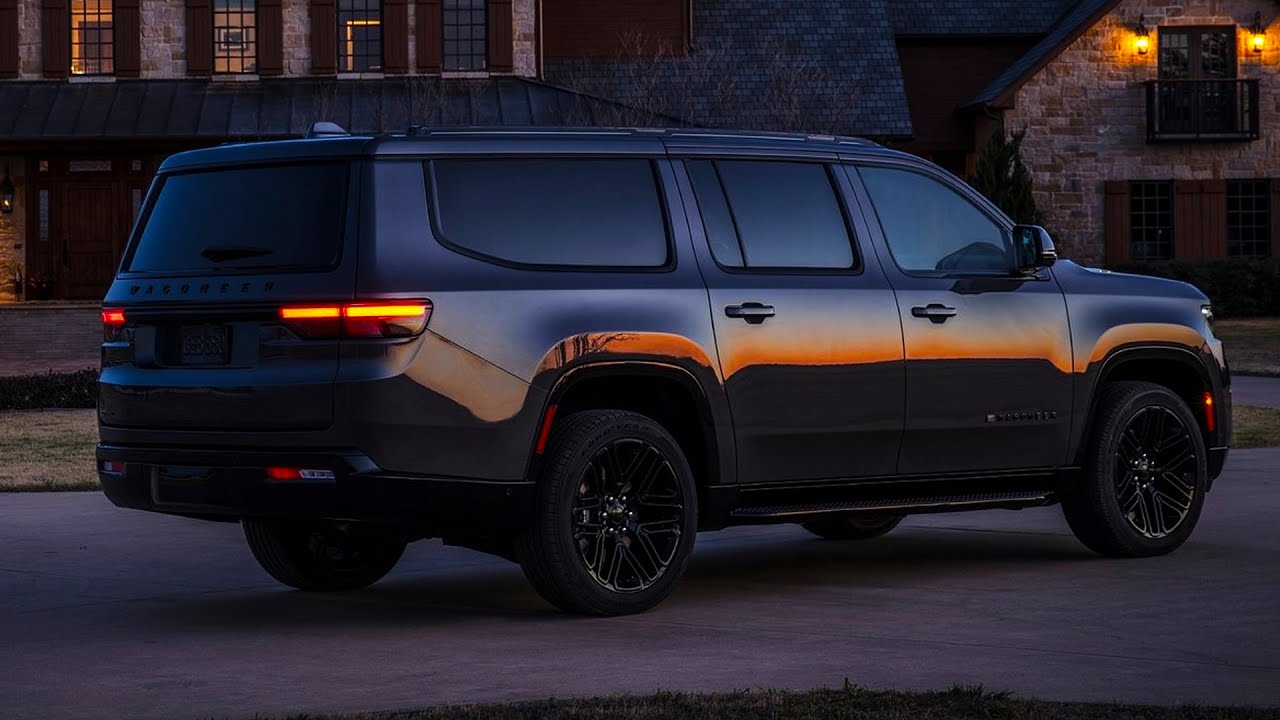 2023 Grand Wagoneer L & Wagoneer L Carbide / More Space and More Powerful. In typical American fashion, the already enormous Jeep Wagoneer and Grand Wagoneer are getting super-sized with the introduction of new long-wheelbase variants for the 2023 model year. Stretched “L” versions of Jeep’s three-row SUVs felt like an inevitability after the regular models were revealed last year, mainly because domestic rivals such as the Chevy Suburban and Cadillac Escalade ESV as well as the Ford Expedition Max and Lincoln Navigator L are extended versions of their respective nameplates.

Both the 2023 Jeep Wagoneer L and Grand Wagoneer L see their wheelbase grow by an identical 7 inches to 130 inches. Likewise, their overall length is extended by an entire foot to 226.7 inches overall. While this growth spurt doesn’t really affect their interior passenger volume, it does contribute to considerably more cargo space. The Wagoneer L offers between 42 and 131 cubes of cargo volume, depending on which rows of seats are stowed, compared with the regular Wagoneer’s range of 27 to 117 cubes. The Grand Wagoneer L actually has slightly less passenger space–173 cubic feet versus 176–but it has considerably more cargo space than the non-L Grand, providing an extra 19 cubes (113 total) behind the first row and an extra 17 cubes (44 total) behind the third.

Not only do the elongated Wagoneers have more space in the back for storing stuff, but they also come standard with Stellantis’ new twin-turbocharged 3.0-liter inline-six. Dubbed the Hurricane, the 2023 Jeep Wagoneer L and Grand Wagoneer L mark the formal debut of this engine. It pairs exclusively with an eight-speed automatic transmission and rear-, all-, or four-wheel drive, but output varies between the Wagoneer L and Grand Wagoneer L. The former model has the standard-output (S.O.) version that makes 420 horsepower and 468 pound-feet of torque, while the latter has the high-output (H.O.) version with 510 horses and 500 pound-feet of torque. The 510-hp version is also currently available in limited quantities as a $2000 upgrade on 2022 Grand Wagoneers. As with the standard wheelbase, the stretched variant can tow up to 10,000 pounds.

Compared with the 392-hp 5.7-liter V-8 and the 471-hp 6.4-liter V-8 that power the standard-wheelbase Wagoneer and Grand Wagoneer, respectively, the L variants and their turbo-six are less thirsty at the fuel pump. The S.O. Hurricane engine is rated at 19 mpg combined–1 mpg higher than the thriftiest 5.7-liter model. The H.O. Hurricane engine is rated at 16 mpg combined–1 mpg more than the 6.4-liter. Jeep says long-wheelbase Wagoneers come with fuel tanks that are four gallons bigger, and the company says the stretched models weigh about 200 pounds more than their shorter counterparts.
A distinct blacked-out appearance will be available only on Wagoneer models as part of the new Carbide package. The kit coats the wheels, grille elements, mirrors, and more in gloss black, and the interior features black seats and special trim on the dashboard. It’ll be available on the regular 2022 Wagoneer this spring and join the 2023 Wagoneer L lineup when it goes on sale in the second half of this year. The 2023 Grand Wagoneer will also hit showrooms at that time, but Jeep hasn’t yet announced pricing for either of the new long-wheelbase models.