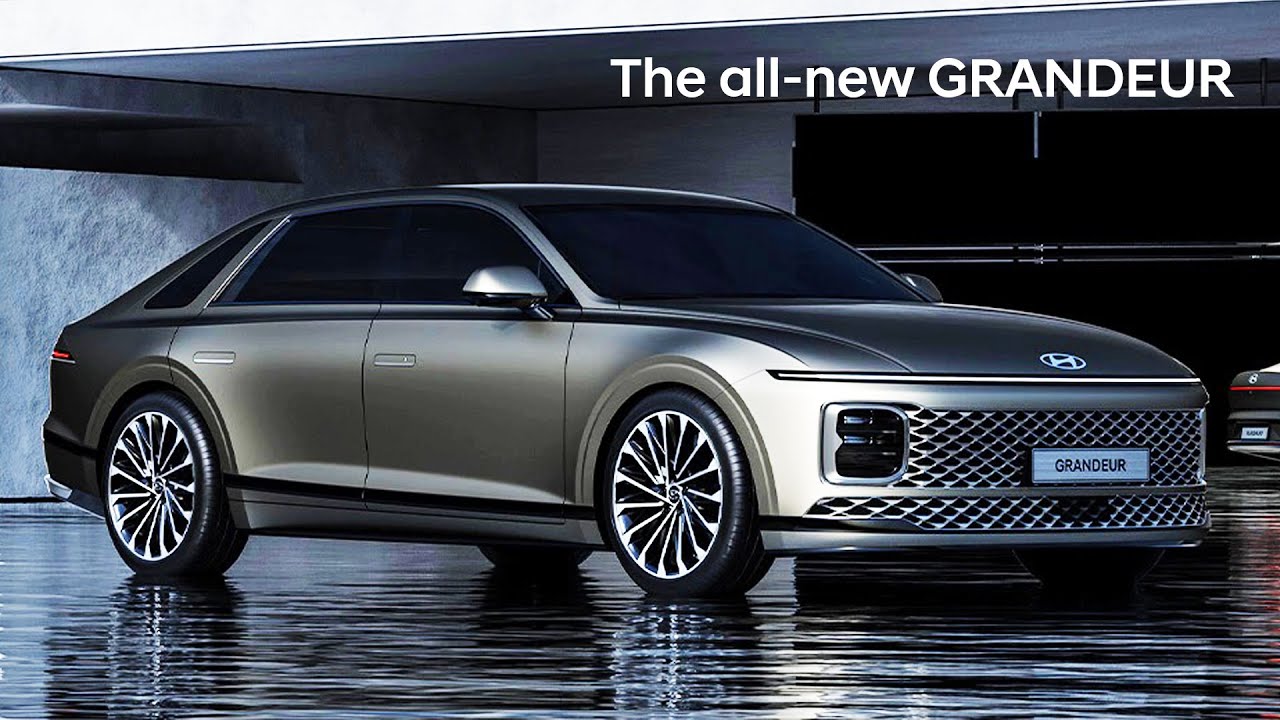 When is a fancy Hyundai not a Genesis? When it’s the Grandeur. The big sedan is entering its seventh generation with a radically different design compared to its predecessor. If the name doesn’t ring a bell, it’s sold in some markets as the Azera. The United States was one of them until the automaker axed it in 2017 by deciding not to bring the previous-gen car. A substantial facelift arrived in late 2019, and now, the all-new model is here.

In typical Hyundai/Kia/Genesis fashion, there are no technical specifications available at this point. The few official images provided show the 2023 Grandeur with a bold exterior design featuring a front fascia akin to the futuristic-looking Staria minivan. An LED light bar stretches across the entire width of the front while the actual headlights are mounted lower in a separate cluster on the bumper to flank a massive grille.

The side profile reveals door handles that remain flush with the body when not in use while the quarter glass serves as a visual nod to the original Grandeur from 1986. That wasn’t a Hyundai per se, but rather a rebadged version of the Mitsubishi Debonair. If you recall, the South Korean marque modernized the Mk1 in November 2021 when it unveiled the electric Heritage Series Grandeur.

The long rear doors strongly suggest the new Grandeur has had its wheelbase stretched for greater rear legroom. As a reference, the previous generation measured 2,885 millimeters (113.6 inches) between the axles and had an overall length of 4,990 mm (196.5 in). It’s now probably slotted between the Genesis G80 and G90 in terms of size.

The uncluttered design continues at the back where a full-width light bar echoes the one at the front. A gently curved trunk lid hosts the rearview camera in the center, above the prominent “Grandeur” lettering. To maintain the clean look, Hyundai hid the exhaust tip under the bumper and we’re noticing the absence of parking sensors. Granted, this isn’t an actual image, so the real thing likely has the sensors integrated into the glossy black bar that surrounds the whole car.

As for the interior, it too is a major departure from the previous-generation model. It gets a dual-screen setup atop the dashboard along with a third display mounted lower on the center console from where the driver and passenger control the climate settings. It would seem the steering wheel’s design takes after that of the first Grandeur while the rear passengers have their own controls mounted between the seats.

Ambient lighting in the door cards lends the cabin a cozy atmosphere while the seats are wrapped in what Hyundai describes as eco Nappa leather combined with hygienic, anti-bacterial leather on some of the touchpoints. Other noticeable features include separate audio controls, a dual-pane sunroof, and electrically operated front seats with interestingly shaped headrests.

Full details should be disclosed in the coming weeks ahead of a market launch likely set for early 2023.

Source: Hyundai
———
Hope you enjoy this video and leave your comment bellow. To stay up to date with alot of new Videos