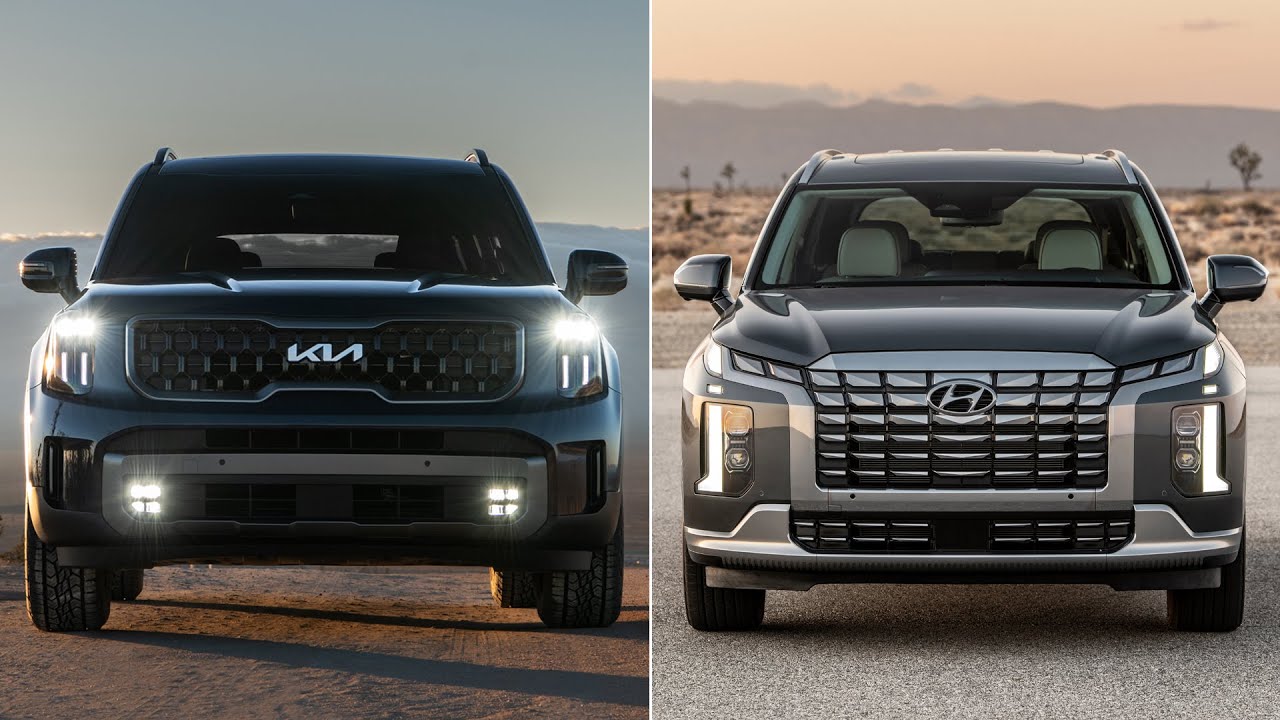 Both corporate siblings stormed onto the scene three years ago, proving to be worthy alternatives to the established Ford Explorer, Honda Pilot, and Toyota Highlander. A midlife freshening is common industry practice, adding appeal to models and staving off competition.

Both the American-built Telluride and imported Palisade score very well in their segment based on Consumer Reports tests and surveys. We look forward to driving the latest versions to take measure of the upgrades. Until then, here’s what we know so far.
What they compete with: Chevrolet Traverse, Ford Explorer, Honda Pilot, Subaru Ascent, Mazda CX-9, Toyota Highlander, and each other.What they look like: Increasingly upscale family transportPowertrains: 291-hp, 3.8-liter V6 engine; 8-speed automatic transmission; front-wheel drive or all-wheel drivePrice: $34,000-$50,000 (estimated)On sale: Summer 2022

Hyundai has dressed up the Palisade’s facade with a new grille, headlights, and bumper. And the rear gains a new bumper. The changes are evolutionary, not revolutionary, and even a bit subtle. The headlights are even smaller than before, and the grille has a more rectangular shape that reminds us of an electric shaver.

The same strategy was applied to the Telluride. It, too, gained a new grille, headlights, and front bumper. At the rear, the taillights and bumper were also updated. New blue, red, and green paint has been added to the palette. The Telluride changes can be most easily spotted below the grille, with the X-Line trims boasting a prominent rectangular shape for lower air intake. The X-Lines have exclusive wheels and an extra 10 mm of ground clearance. The X-Line Pro has 18-inch black wheels with all-terrain tires.

Inside
The cabins for both SUVs edge upscale, with new materials, added features, dramatic screens, and revised vents.

The Palisade has a new instrument panel and a wide 12-inch infotainment display (shown below). Trick tech includes Hyundai’s first in-car WiFi and the automaker’s first digital rearview mirror, allowing a view behind the SUV that isn’t obstructed by passengers and headrests. Device charging has been accelerated with USB-C ports replacing USB-A and the wireless charge mat moving from 5W to 15W.

The driver’s space is augmented with a new seat and steering wheel design. Passengers benefit from an adjustable second-row armrest and available third-row heated seats.

The Telluride transformation is more bold, with its version of the large, horizontal display design spreading through several Kia models for 2023. This involves dual 12.3-inch displays for the instrument cluster and infotainment system, hidden behind a seamless glass panel (shown below). It’s quite striking; we experienced a similar system in our 2023 Kia Sportage.

The Telluride also has a new steering wheel and various trim bits throughout. It’s nice to see that it retains a traditional lever-style gear selector rather than the finicky push buttons used in the Palisade.

Forward collision warning and automatic braking step up a notch for 2023 with several abilities to sense potential collisions at intersections, and steering assist to help avoid impact.
———
Hope you enjoy this video and leave your comment bellow. To stay up to date with alot of new Videos