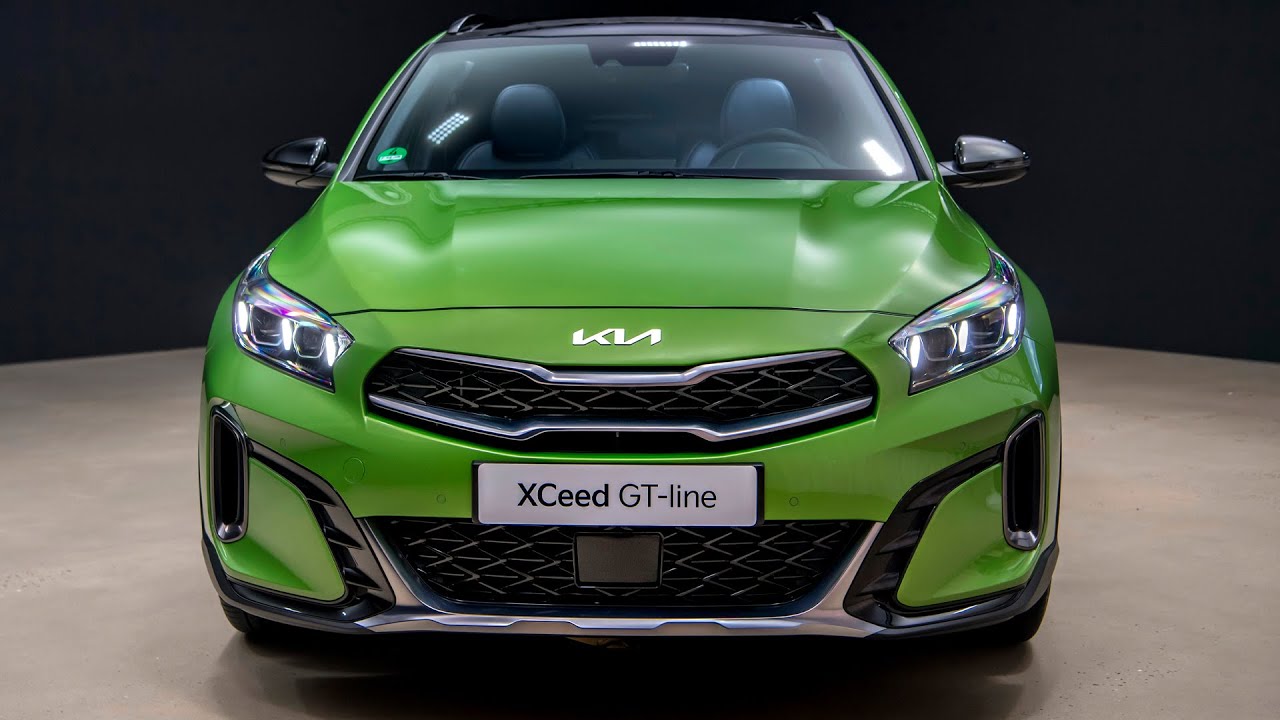 Kia has given its 2022 XCeed crossover a mid-life makeover, sharpening the styling, expanding its mild-hybrid tech and adding a more powerful GT-Line trim at the top of the range.

The high-riding offshoot from the Ceed hatch gains a more aggressive face thanks to new LED lights and bumpers, plus a narrowed grille that gives it a slightly moodier look. The LEDs at the rear are also new, as is the gloss black diffuser and the optional 18-in wheels that you won’t find on any other Ceed variant (16s are standard). The XCeed also ditches the old Kia hood nose badge for letters spelling out the brand name, much like the Ceed and Proceed did when they were facelifted last year.

But the new GT-Line trim goes further, with a slimmer grille surround and more pronounced bumper air intakes at the front, unique 18-in wheels under the arches and hexagonal LED lights and a body-color diffuser at the back. There are more GT-specific changes inside, including a flat-bottom steering wheel, black headliner, perforated leather gear shifter and sporty GT-Line seats.
And while the XCeed GT Line is being pitched as more of a trim upgrade than a high-rise hot hatch it does at least get an extra slug of power to back up the newfound visual swagger. The engine options for the rest of the XCeed range top out with a 158 hp (160 PS) 1.5-liter T-GDi four-cylinder engine, but the new GT-Line crossover gets the same 201 hp (204 PS), 196 lb-ft (265 Nm) 1.6 fitted to the Ceed and Proceed GT hot hatches. Mated to a seven-speed twin clutch transmission and driving the front wheels only, the bigger engine is good for zero to 62 mph (100 km/h) in 7.5 seconds.

Drivers content to take a little longer to reach the same speed can downgrade to a 1.0-liter T-GDI with 118 hp (120 PS) / 127 lb-ft (172 Nm) now fitted with MHEV tech, or a mild-hybrid 1.6-liter diesel that generates 134 hp (136 PS), plus 236 lb-ft (320 Nm) if you pair it with a seven-speed paddle-shift transmission. Go for the six-speed manual version of the MHEV diesel and you lose 30 lb-ft (40 Nm), but you get Kia’s trick iMT manual that features an electronically controlled clutch that allows the car to coast at speeds of up to 77 mph (125 km/h) when appropriate and save fuel.

And this being 2022, there’s obviously a full hybrid option. Carried over from last year’s car, it combines a 1.6-liter combustion engine with an electric motor, sending 139 hp (141 PS) and 196 lb-ft (265 Nm) to the front wheels through a six-speed dual-clutch transmission. The battery is fairly small at 8.9 kWh, so the PHEV is only rated at 30 WLTP miles (48 km), but Kia says it should give around 38 miles (60 km) of zero emissions city driving.

Interior changes are mostly limited to improvements in connectivity, adding the latest version of Kia Connect, which brings Google and Apple calendar integration, and lets drivers plan journeys in advance and send navigation data to the car from their smartphones, or use their smartphones to locate theirs cars if they forget where they left it in a massive long-stay airport parking lot. You also get USB-C charging ports for passengers in the front and rear.

Depending on market, base cars come with a DAB radio units with a piddly 5.0-in screen and mid-range versions get an 8.0-in touchscreen featuring wireless Android Auto and Apple CarPlay. Top-spec models, on the other hand, feature a 10.25-in infotainment system with Bluetooth multi-connection allowing two people to connect their phones at the same time, and a 12.3-in digital instrument pack. The safety gadget tally is also improved on the new XCeed with the addition of navigation-assisted cruise control that uses nav data about speed limits to automatically reduce the vehicle speed in “safe zones” and before corners.

Though the XCeed is spun off the the Ceed hatch platform and shares its 104.3-in (2,650 mm) wheelbase and front doors, it rolls on softer suspension to give a more refined ride and provides an additional 1.7-in of ground clearance. But with no all-wheel drive option and a maximum of 7.2-in (184 mm) of clearance, the XCeed is definitely more about looking like an off-roader than acting like one.

Production of the facelifted XCeed at the Slovakia plant starts this summer, with European sales commencing in September. As with the previous XCeed, however, this is one Kia that won’t be coming to America.