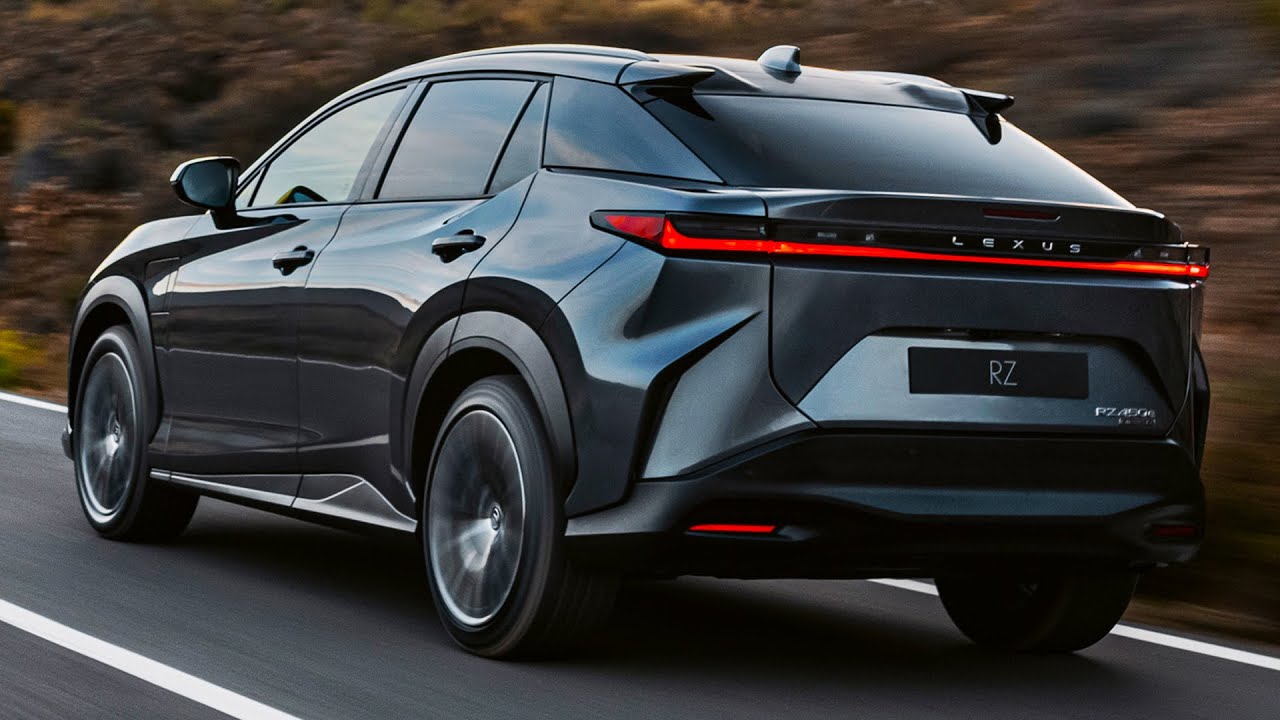 2023 Lexus RZ 450e – Stylish Electric SUV With 309 HP. Lexus was surprisingly generous in the build up to the RZ’s reveal as the teaser campaign pretty much showed the whole thing. Nevertheless, we’ve been waiting for this day to come and discover all the details about the fancier alternative to the Toyota bZ4X. As you can see, it’s more than just swapping badges and calling it a day since the upmarket version has its own visual identity.

Where should we start? There’s significantly less plastic body cladding compared to the bZ4X and the other sister model, Subaru’s Solterra. The greenhouse is different since there’s no fixed glass aft the rear doors. Instead, Lexus decided to put a glossy black panel to enable the “floating roof” effect. Speaking of which, all the pillars are black, and so are the side mirrors mounted lower on the doors than they are on the mechanically related SUVs.

A closer inspection shows the headlights have a different shape and the upper character lines are unique to the RZ. We could say the same about the wheel design housed within shiny black arches. Moving at the back, Lexus’ version has the sleekest derrière of the trio and a fresh take on the dual-piece roof spoiler compared to the equivalent Toyota and Subaru EVs. Those two have badges on the tailgate whereas the luxury alternative proudly carries “LEXUS” lettering above the center of the light bar.

Stepping inside, the 2023 RZ has the familiar yoke, but the dashboard behind it is exclusive to Lexus’ dedicated electric SUV. For example, the digital instrument cluster is positioned at a normal distance from the driver rather than being mounted further back as it’s the case on the bZ4X and Solterra. The 14-inch touchscreen is bigger than the 12.3-inch infotainment of the other two models. It appears there are fewer quick shortcuts on the center console where the air vents sit above the display rather than below.

We’re fairly certain some will find the start/stop button’s location a bit unusual, sitting to the left of the central air vents. Speaking of which, the side vents are arranged horizontally instead of vertically and the “floating” console between the seats has fewer controls than what you’ll find inside the Toyota and Subaru models. Overall, the RZ’s cabin seems a tad nicer to sit in.

Much like the Solterra, the RZ is an all-wheel-drive-only affair, and uses a setup labeled as “Direct4.” However, the 450e packs more punch courtesy of a front-mounted electric motor with 150 kW and a rear e-motor with 80 kW. Combined, the two push out 230 kW, which works out to 308 horsepower. It represents a significant bump of 93 hp over the Subaru and the AWD-equipped Toyota bZ4X with their total output of 215 hp.

While the lesser electric SUVs have 249 pound-feet (336 Newton-meters), the RZ bumps those figures to 321 lb-ft (435 Nm). The 71.4-kWh battery pack is carried over and Lexus estimates it has enough juice for 225 miles (362 kilometers). For the sake of comparison, the AWD-equipped bZ4X can cover 228 miles in the XLE trim and 222 miles if you step up to the Limited. It’s the same story with the Solterra, offering 228 miles for the Premium model and 222 miles for the Limited and Touring.

The range depends on the trim level because the more expensive models have extra equipment, thus making them slightly heavier. More importantly, the upper-spec versions ride on larger wheels. In Lexus’ case, the estimated 225-mile is applicable to the US-spec RZ featuring 18-inch alloys.

The 2023 RZ 450e is scheduled to go on sale in North America towards the end of the year. Pricing details have yet to be disclosed, but you’ll be paying more than you would for a $44,080 bZ4X XLE with AWD. We’ll remind you the Toyota in the better-equipped Limited trim with dual motors retails for $46,700. That tells us a fully loaded RZ could hit the $50,000 mark before incentives.

Source: Lexus
———
Hope you enjoy this video and leave your comment bellow. To stay up to date with alot of new Videos