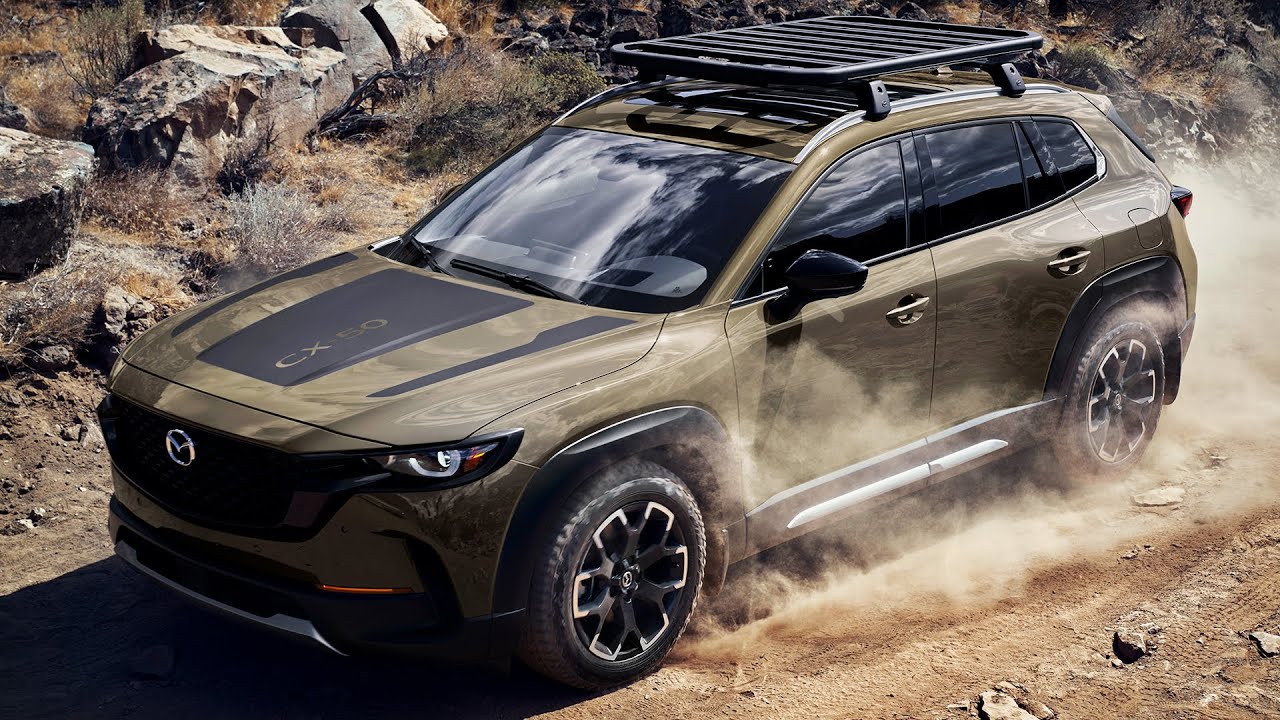 2023 Mazda CX-50 – Interior, Exterior and Drive / A US-only SUV. After the perplexing launch of the MX-30 electric crossover, but also riding high on the continued success of its more conventional CX-5, Mazda just unveiled the newest member of its growing family of SUVs. Meet the new 2023 Mazda CX-50, with a focus on off-road performance that feels like a shot across Subaru’s bow.

The CX-50 is visually and, presumably, physically taller than the CX-5 — Mazda hasn’t released detailed specs and dimensions yet. Mazda tells us that the CX-50’s low roofline and wide-opening rear door grant easy access to the roof racks, despite the increased ground clearance.

Up front, you’ll find a blacked-out version of the automaker’s wing-shaped grille and headlight combo that helps to visually broaden the SUV’s stance. Not that it needs much optical trickery: The CX-50 riffs on Mazda’s design language with broader, more squared-off shoulders and fender flares to accommodate its wider track. And, of course, because this is an off-road focused vehicle, there’s black plastic cladding protecting the wheel arches and lower body.

At launch, the CX-50 will be offered with both naturally aspirated and turbocharged versions of the automaker’s Skyactiv-G 2.5-liter four-cylinder engine with a six-speed automatic transmission and standard all-wheel drive. Electrified powertrain options will join the lineup post-launch, including a traditional hybrid model, but details regarding specs and timing of that configuration have not yet been announced.

Mazda’s approach to the CX-50’s performance is, in typical Mazda fashion, a little different from the rest. The automaker tells us that in its research around how drivers use off-road-focused SUVs, they learned that the majority of driving still takes place on paved roads before you reach the dirt. So, it aimed to deliver a ride built around the great on-road driving dynamics we’ve seen in the rest of its roadsters, hatchbacks and SUVs — no, not you, MX-30 — with a bit of extra capability for trail driving.

“If you’re off the pavement, off-road mode is the one you want,” says Dave Coleman, vehicle development engineer at Mazda R&D. “It’s as simple as that.”

“While [multiple off-road modes] seems exciting in the showroom, we found it confusing off-road,” Coleman continues. “The real-world conditions are always some ambiguous combination of surfaces landing somewhere between the settings you’re choosing from. We firmly believe the most intelligent system in the vehicle is the driver.”

Inside, you’ll find a driver-oriented cockpit along the lines of what we’ve come to expect from Mazda vehicles. Even the vents are arranged symmetrically around the steering wheel, aimed perfectly at the driver. The cabin can also be fashioned with a new Terracotta interior design motif inspired by modern outdoor gear. The CX-50 also marks the debut of Mazda’s first panoramic moonroof option.

The all-new Mazda CX-50 will begin production next year at the new Mazda Toyota Manufacturing plant in Huntsville, Alabama, in January 2022, arriving at dealerships later in the year.