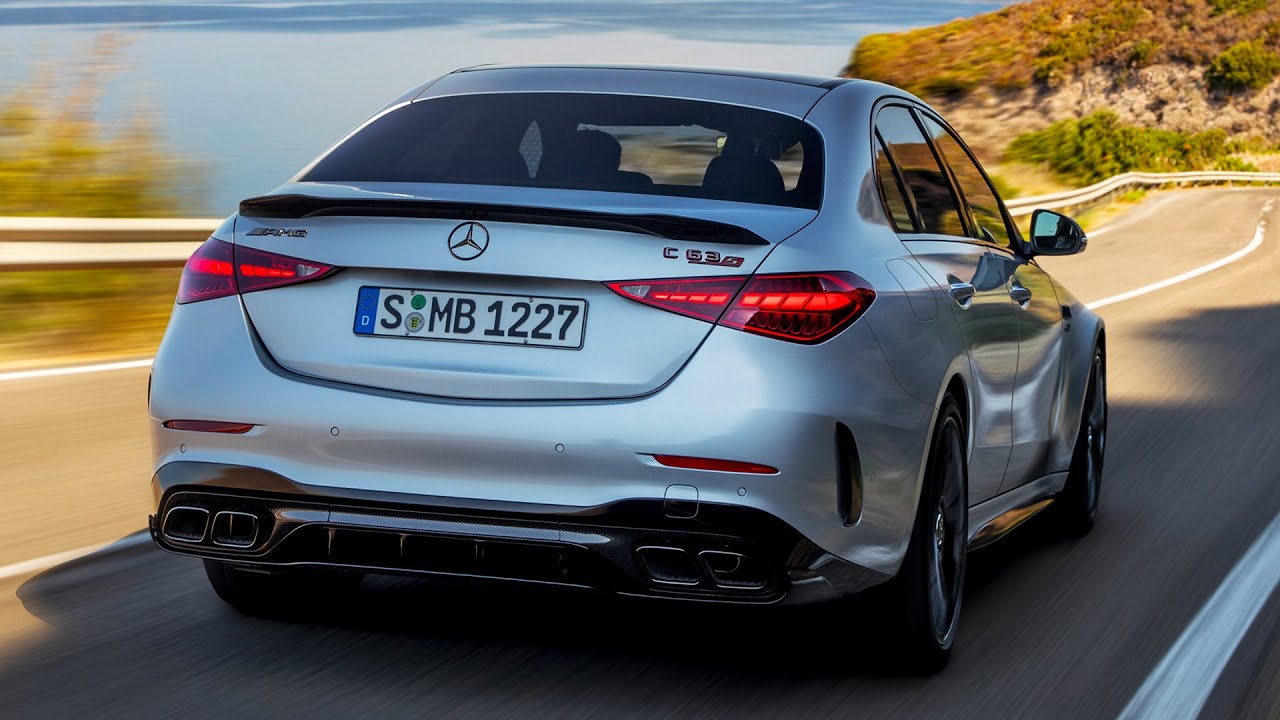 Making this power is a combination of the highest-output M139l engine yet and a rear-mounted electric motor with a two-speed transmission. The engine, while similar to what’s used in the C 43, gets a bigger version of the electrically-assisted turbo to make 469 horsepower and 402 pound-feet of torque, making it the most potent four-cylinder in the world. That engine sends power through a nine-speed automatic to the rear axle where the electric motor is. The electric motor makes 201 horsepower and has a two-speed transmission itself, which changes gear around 87 mph. The electric motor also features an electronically-controlled limited-slip differential. Power can be sent either to the rear wheels or back up to the front, enabling all-wheel drive in gas, hybrid or electric driving scenarios. The all-wheel drive system does have a drift mode, like other AMG models. Performance is impressive with a claimed 3.3-second time to hit 60 mph, and top speed of 174 mph (standard top speed is electronically limited to 155 mph).

The C 63 S E Performance is a plug-in hybrid, but just barely. It has the same 6.1-kWh capacity as the AMG GT 63 S E Performance 4-Door. In that model, it provides just 7 miles of range. The C 63’s smaller size might get it a little more range, but likely very little. The battery weighs 196 pounds and features liquid cooling, with coolant running between every single cell. The battery will also power the C 63 to 81 mph without the engine kicking in.

Naturally, AMG made chassis upgrades, too. The suspension uses steel springs with electronically adjustable shocks. Four-wheel steering is standard, as are steel brakes with six-piston calipers up front and single-piston units at the rear. Interestingly, the C 63 S is 3.3 inches longer overall compared to a regular C-Class sedan, and its wheelbase is longer by 0.4 inch. Width is also 3 inches greater. Wheels are 19 inches as standard, but 20-inch wheels are available as options.

And of course, the C 63 S E Performance looks meaner, too, with a redesigned front fascia, new hood vent, side skirts, rear bumper with diffuser and a rear spoiler. The interior gets AMG-specific trim and sport seats, with even more aggressive seats available optionally. New display readouts are included, too for the car’s hybrid functions.

Pricing and availability of this hot C-Class have not yet been announced. With a model year of 2024, we would expect it to launch sometime in the coming year.

TIMELINE:
Intro 00:00
Drivetrain & Performance 00:40
Exterior Features 02:21
Interior Features 06:05
———
Hope you enjoy this video and leave your comment bellow. To stay up to date with alot of new Videos