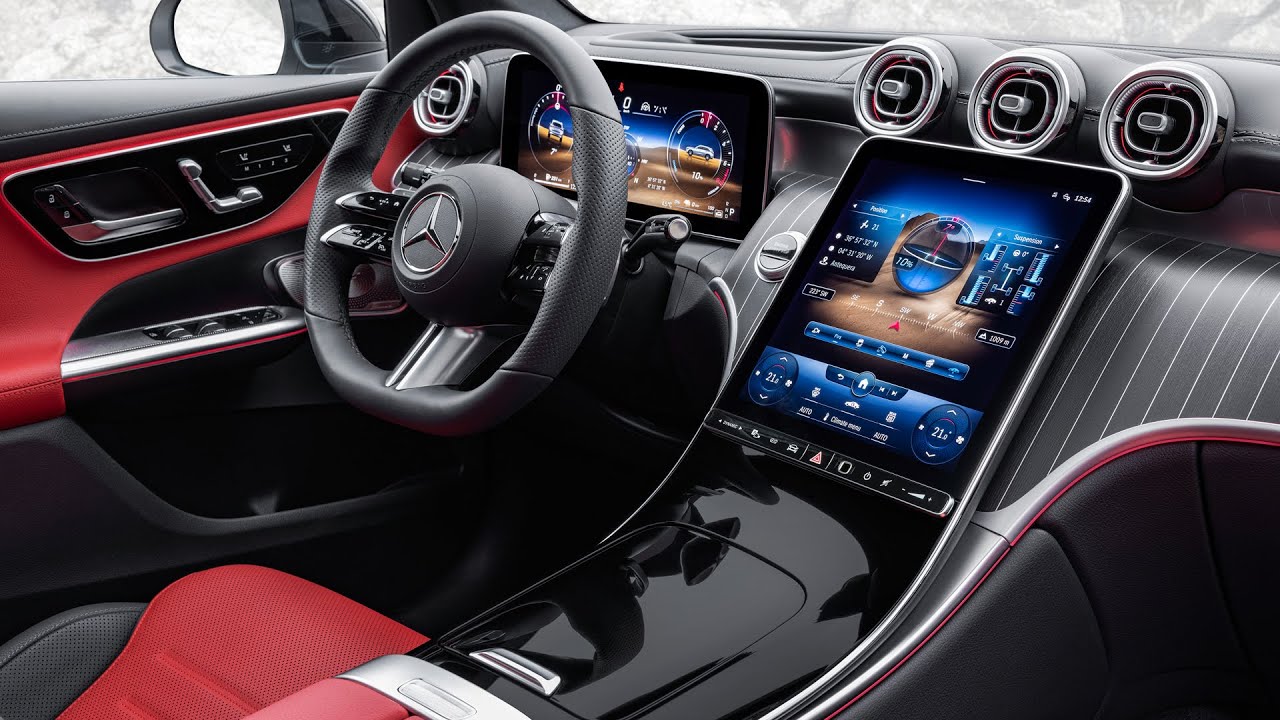 2023 Mercedes-Benz GLC – Stylish Luxury SUV / Next-Gen GLC SUV. The new Mercedes GLC has been revealed, with the brand’s midsize SUV getting a new look and a raft of new technology.

This alternative to the BMW X3 and Audi Q3 will be offered with a range of mild-hybrid and plug-in hybrid engines when it goes on sale later this summer.

New Mercedes GLC price
The new Mercedes GLC has gone on sale in Germany where it costs the equivalent of £48,250 for an entry-level GLC 200 model. This version is powered by a 204hp petrol engine (with mild-hybrid assistance – more on this later) and comes with an automatic gearbox and four-wheel drive as standard.

You can expect UK-bound GLCs to cost approximately the same when they go on sale soon.

New Mercedes GLC design
The new Mercedes GLC’s design is a case of evolution rather than revolution when you compare it to the outgoing model, however, there are plenty of changes to give it a fresh look.

The rear sees some LED tail lights similar to those on the new Mercedes C-Class. Sporty AMG-line models get a more aggressive bumper design front and rear.

The grille is wider and more imposing and has subtle cutouts at each upper corner where it meets the new headlights. These are slimmer than those on the outgoing Mercedes GLC and come with LED technology as standard.

Down the side, you can opt for either 18- to 20-inch alloy wheels (the exact sizes and designs will depend on which version of GLC you go for).

New Mercedes GLC interior and infotainment
Looking inside the new Mercedes GLC, it’s clear that the cabin has taken a lot of inspiration from the Mercedes C-Class.

You’ll spot the new 11.9-inch touchscreen infotainment screen instantly. It’s angled slightly toward the driver to make it easier to use on the move, but you can control plenty of the car’s features (such as the climate control system) by using the ‘Hey Mercedes’ voice command system instead.

You get a set of polished air vents above the two-tiered dashboard with a new square design and gloss black bezels. This trim matches the finish on the new button-less centre console.

A 15-speaker Burmester sound system is available on the options list, as are massaging seats, a panoramic sunroof and a head-up display.

New Mercedes GLC engines
The Mercedes GLC is available with a range of mild hybrid and plug-in hybrid engines.

These cars both use a small electric motor to help save fuel when cruising and coasting to a stop. You get a similar system in the diesel-powered GLC 220 d, too. This car comes with a 197hp 2.0-litre engine paired with the same automatic gearbox and four-wheel drive as the petrol-powered GLC 200 and GLC 300.

Three plug-in hybrids will be on offer from launch, two petrol and one diesel. Both petrol cars use a 2.0-litre engine. The entry-level PHEV has a combined 313hp, while the higher powered version gets 381hp.

The diesel plug-in hybrid also uses a 2.0-litre engine, and has a combined 333hp. All plug-in hybrid models use the same 31kWh battery, although the electric-only range depends on whether you go for a petrol hybrid (75 miles) or a diesel hybrid (63 miles).
———
Hope you enjoy this video and leave your comment bellow. To stay up to date with alot of new Videos