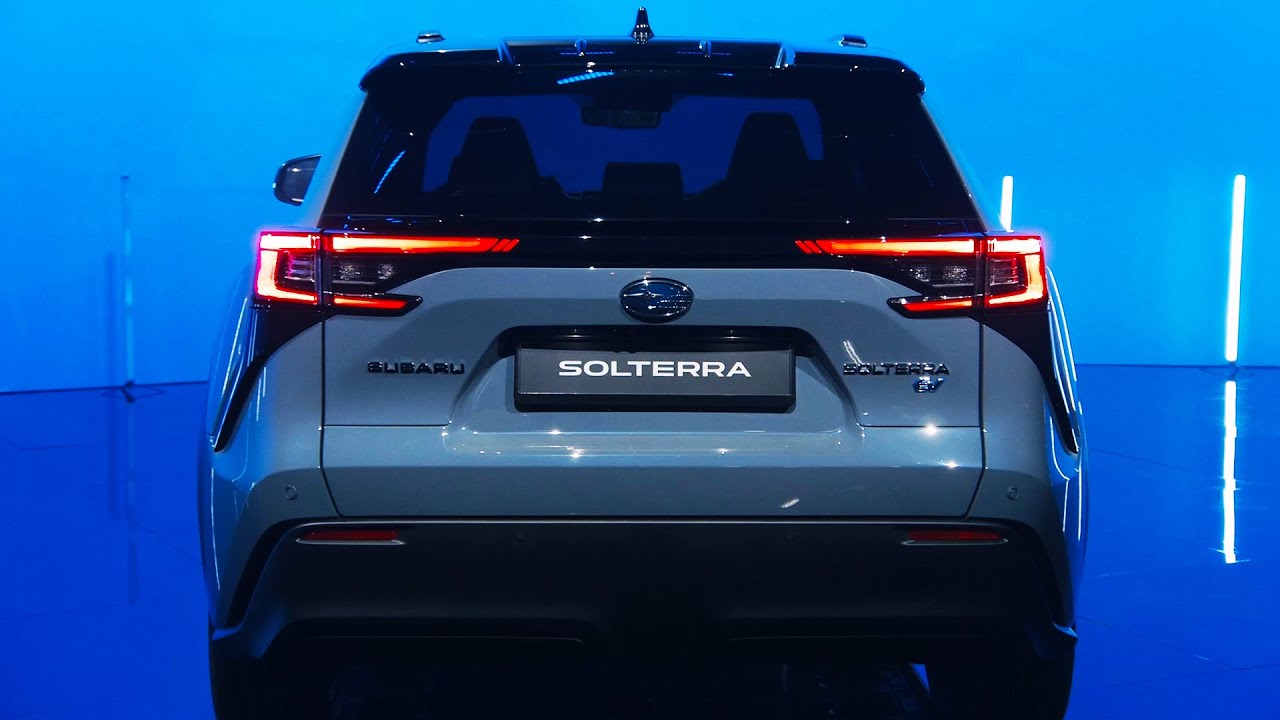 2023 Subaru Solterra – Exterior and Interior / All-electric compact SUV. Subaru has unveiled its first pure-electric car, an SUV called the Solterra, which shares its mechanicals (and a lot of body panels) with the Toyota bZ4x. It will go on sale halfway through next year, and will be a rival for the Ford Mustang Mach-E.

The Subaru Solterra is powered by a 71.4kWh battery pack, and buyers will be offered a choice of two powertrains. The entry-level model is a single-motor system, which produces 201bhp and has a maximum range of around 330 miles.

Above that, there’s a dual-motor, four-wheel-drive option, which has a combined output of 215bhp. However, due to the increased energy consumption by the extra electric motor, maximum range drops to around 285 miles.

Toyota and Subaru have previously said their joint EV venture will play to both brands’ strengths. As such, the SUV twins will combine Toyota’s experience with electric technology and Subaru’s four-wheel-drive and off-road expertise. However, compared with the Toyota bZ4X, Subaru is aiming for even more safety and handling stability with the Solterra.

So, the dual-motor Solterra also comes with an X-Mode AWD drivetrain setting, which Subaru says was designed for rough roads. The system can even distribute the torque between the front and rear axles to provide the most grip possible.

The front-wheel-drive model comes with 18-inch wheels as standard, while the four-wheel-drive variant can be fitted with either 18 or 20-inch alloys. Subaru has yet to confirm any other specifications, though.

However, it has confirmed that its SUV will have the same 150kW DC rapid charging capability as the Toyota bZ4x, so an 80 per cent recharge should take around 30 minutes.

Subaru says its electric SUV is 4,690mm long, 1,860mm wide and 1,650mm in height, which makes it around the same size as the current-generation Forester. The finished Solterra has also adopted some of the bold styling cues from the brand’s EV concept car that was unveiled earlier this year.

For example, the huge black wheelarch extensions and sharp headlamps have both made their way on to the finished Solterra, although the angular front end has been toned down slightly, likely in the interest of pedestrian safety. Buyers will also be able to specify a sunroof.

Inside, the Solterra is similar to the Toyota bZ4x, with the two cars sharing the same digital gauge cluster, high centre console and enormous Tesla-esque infotainment system in the centre of the dashboard.

As Subaru hasn’t made any changes to the bZ4x’s body-in-white, (only the bumpers and lamp units have been changed), boot space should also be the same at 452 litres.

This new EV will help Subaru achieve its long-term emissions goals. By 2030, the Japanese manufacturer is aiming for all-electric and electrified vehicles to account for at least 40 per cent of its global sales.

Subaru started its shift towards electrification in 2019 by launching hybrid variants of the XV and Forester – the latter of which features the brand’s e-Boxer PHEV powertrain. By 2050, Subaru hopes to reduce average CO2 emissions from its new vehicles by 90 per cent from 2010 levels.