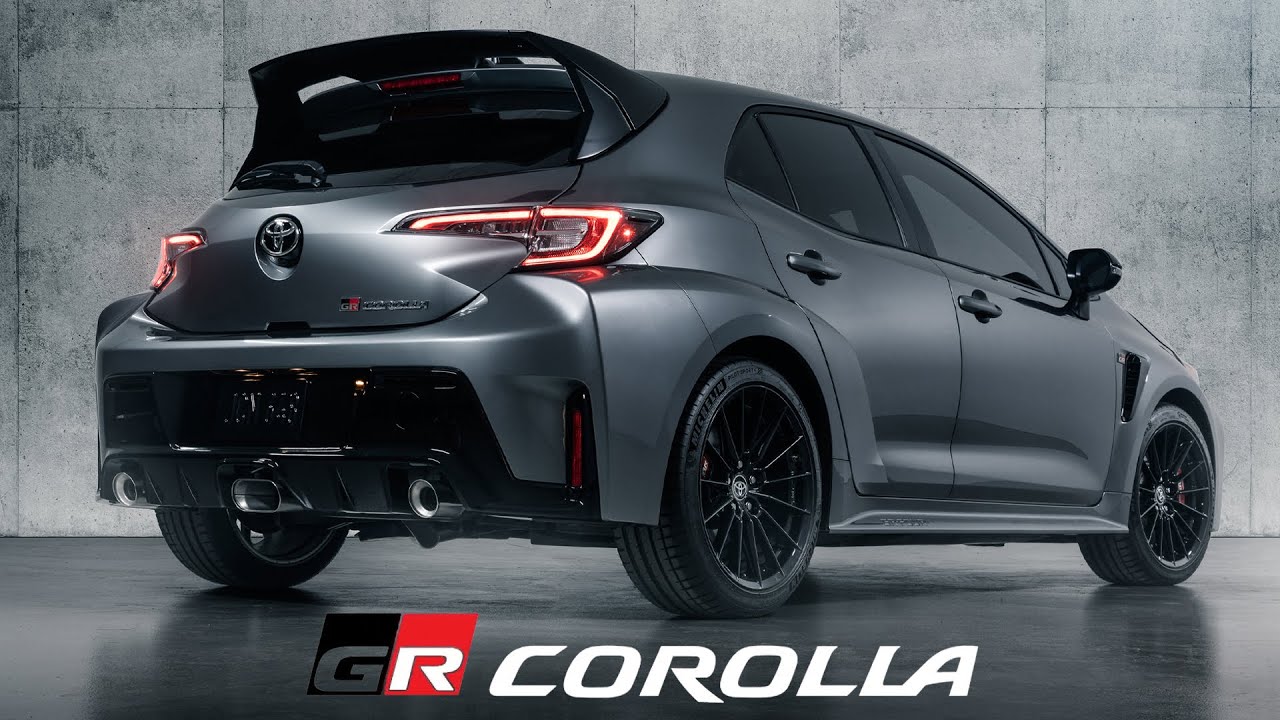 2023 Toyota Corolla GR – Extremely Hot Hatch With 300 HP, AWD, Manual Gear. After a long wait and lots of teasing, the 2023 Toyota GR Corolla is finally here. It gives the brand a hot hatch to sell in the United States for the first time in ages.

The GR Corolla will be offered in two trims: Core and Circuit Edition. The latter adds a carbon-fiber roof, hood bulge, and larger rear spoiler. Both trims are rally-car wide and RC-car silly in the best way, with chunky, vented fenders and a tweaked version of the Corolla’s big frown of a grille that makes the GR look like it’s laughing.

Under the hood it’s got a souped-up version of the turbocharged 1.6-liter three-cylinder from the Yaris GR. In the Yaris, the engine makes 257 hp. In the Corolla, the G16E-GTS will make an astounding 300 hp and 273 pound-feet of torque. That’s 100 horses per cylinder. To up the power output, the Corolla exhaust uses three exhaust exits for reduced backpressure. As a bonus, it looks cool coming out the back. To keep the direct-injected engine together at its 6500 rpm max power peak, the three cylinders use jets of oil to cool the pistons, large exhaust valves to quickly vent spent gasses, and a machined intake port for better flow.

If three exhaust tips and three oil-cooled pistons aren’t enough to get you excited, how about six gears, as in, a manual transmission? The GR Corolla aims for the hearts of purists by coming only with a six-speed manual transmission with a rev-match function.

The Corolla also has Toyota’s first sporty all-wheel-drive system in decades. Dubbed GR-Four—and embossed on the door sills in a nice little historical throwback to the GT-Four rally cars of the ‘80s—the system is designed for multiple terrains and quick adjustability. The standard setting is a 60:40 front to rear torque distribution, but it can go as rear-wheel biased as 30:70, or put in an even 50:50. However you split it, power feeds to open differentials as standard with an option for front and rear Torsen limited-slip differentials as part of the Performance package on the Core (the Torsen diffs are standard on the Circuit Edition).

To prepare for the gravel-spewing, rise-jumping life your GR Corolla will surely have, the frame has additional welds to strengthen joints and more structural adhesive used between glued components. The front suspension uses tuned struts while the rear is a multilink setup designed around the AWD system. The GR is wider than a standard Corolla by 2.4 inches, and uses those fat fenders to house Michelin Pilot Sport 4 tires in 235/40R-18 size on gloss-black 15-spoke alloy wheels. Behind the wheels are slotted 14.0-inch brake rotors in the front and 11.7-inch rotors in the rear. The Circuit Edition clamps ‘em to a stop with red calipers marked with the GR logo.

The GR’s interior is not as dramatic a departure from a normal Corolla as the exterior is, but there are still some racy touches to set it apart. That’s especially true in the Circuit Edition, which gets a leather-trimmed steering wheel, a signed shifter, suede and faux leather sports seats with red details, and badges on the headrests. The Core model gets cloth seats without red accents, but both models get a GR-only performance readout in the 12.3-inch gauge cluster, a short-throw shifter, and a mechanical parking brake. Hello, parking lot shenanigans.

The infotainment software and comfort features look standard Corolla, with Android Auto and Apple CarPlay capability, multiple charge ports, and optional wireless charging. Safety and driver-assistance features may seem like anachronisms in a car so intended for hooliganism, but if your parking lot shenanigans shenan you towards a light pole or a pedestrian, both versions of the GR Corolla come standard with Toyota Safety Sense 3.0’s suite of features.

Pricing has yet to be released, but we’re hoping for something in the low $30,000 range. The GR Corolla will go on sale later in 2022, and we’ll be eagerly waiting to get one lined up for a hot-hatch shootout.
———
Hope you enjoy this video and leave your comment bellow. To stay up to date with alot of new Videos