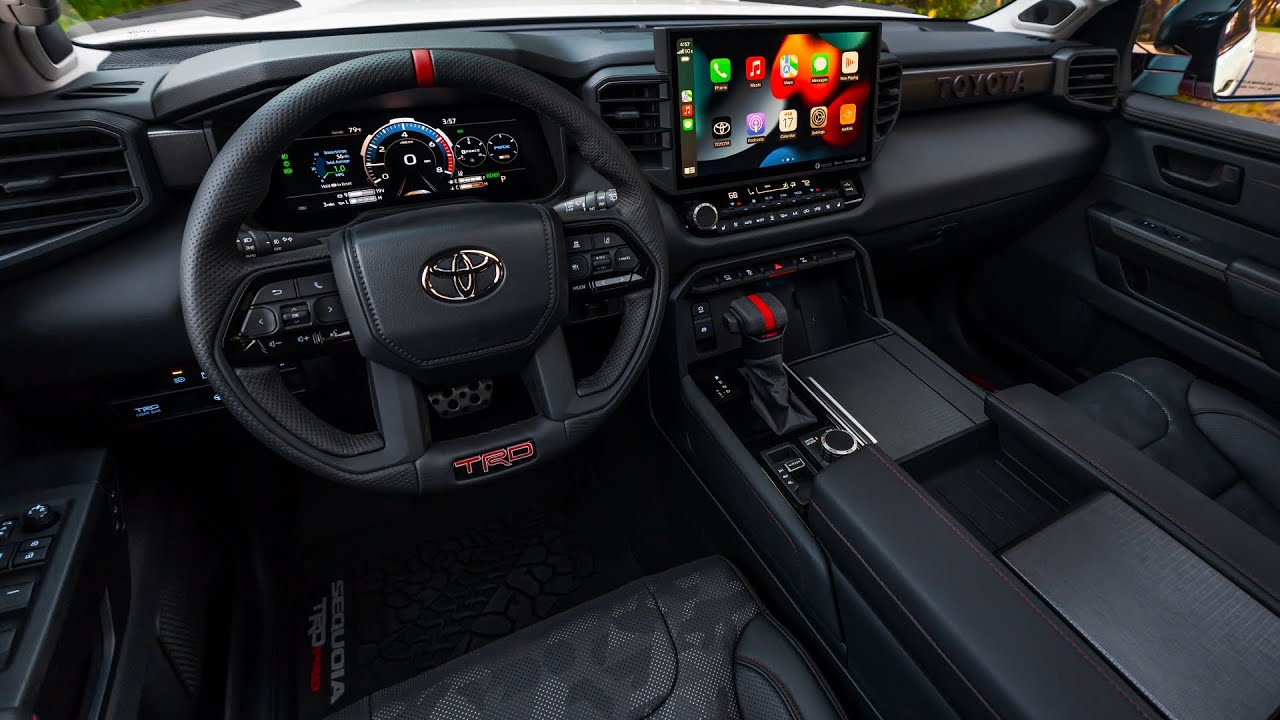 2023 Toyota Sequoia Interior – Better than the New Land Cruiser. Toyota is revamping its ancient body-on-frame offerings with technology from the modern era, including better interiors with massive touchscreens, coil-sprung rear suspensions, and more efficient powertrains. The 2022 Tundra pickup arrived first, aiming to capture a larger share of the full-size-pickup market dominated by Ford, Chevy, and Ram, and now the new 2023 Sequoia full-size SUV is here with similar upgrades. And it only comes as a hybrid.

Like the new Tundra, the Sequoia is built on Toyota’s TNGA-F platform, but it’s shorter in length compared with the full-size pickup. This platform also underpins the new global Land Cruiser and Lexus LX, but the former isn’t sold here anymore. The Sequoia now uses a solid rear axle instead of an independent setup like the previous-generation and the Chevy Tahoe, Ford Expedition, and Jeep Wagoneer. Rear air springs and adaptive dampers are available, and the off-road-oriented TRD Pro model has 2.5-inch Fox dampers with internal-bypass chambers and remote reservoirs and 33-inch Falken Wildpeak all-terrain tires.

Unlike the Tundra, which is available with a nonhybrid twin-turbocharged 3.4-liter V-6, the Sequoia comes standard with the iForce MAX hybrid setup. It has an electric motor between the twin-turbo V-6 and 10-speed automatic transmission that’s powered by a roughly 1.5-kWh nickel-metal-hydride battery pack. This combination provides 437 horsepower and 583 pound-feet of torque. Toyota hasn’t announced fuel-economy estimates yet for the Sequoia or Tundra hybrids, but Sequoias can tow up to 9000 pounds. That’s 600 pounds more than the Chevy Tahoe’s max rating but less than the Ford Expedition’s and Jeep Wagoneer’s. To help with hauling, a towing technology package adds a trailer backup guide, and towing mirrors and a surround-view camera are available.

The Sequoia’s grille is somewhat downsized compared to the Tundra’s. It’s about 10 percent smaller than the pickup’s, since it’s not a single-frame look, but the rest of the front end is shared with the pickup, including the headlights. We think the Sequoia’s best angle is the rear three quarter view, which shows the thin taillights that complement the lights in the front. Among the exterior color choices are Lunar Rock and Supersonic Red.

Interior improvements first seen on the Tundra carry over into the Sequoia. An 8.0-inch touchscreen is standard on the SR5 model, but the large 14.0-inch touchscreen is available as an option on that trim on it and standard on the rest of the lineup. A 12.3-inch digital gauge cluster is standard, along with wireless Apple CarPlay and Android Auto capability. It offers either a second-row bench or captain’s chairs, and the third-row bench seat can slide up to six inches and fold down to fit in an adjustable cargo shelf.

When it goes on sale this summer, the Sequoia will be available in SR5, Limited, Platinum, TRD Pro, and Capstone (a fully loaded, luxury model first introduced on the Tundra) models with two- or four-wheel drive available. A TRD Sport package is available on the SR5 model that adds black TRD wheels, Bilstein dampers, and other TRD accents. Newly available on the Sequoia SR5 and Limited models is a TRD off-road package, and it adds a locking rear differential, Bilstein dampers, black 18-inch TRD wheels, Multi-Terrain Select off-road drives modes, and off-road cruise control.

The 2023 Toyota Sequoia will be built alongside the Tundra at Toyota’s factory in San Antonio, Texas. Pricing is expected to start close to $50,000 and reach around $70,000 for the fully loaded Capstone model.
———
Hope you enjoy this video and leave your comment bellow. To stay up to date with alot of new Videos