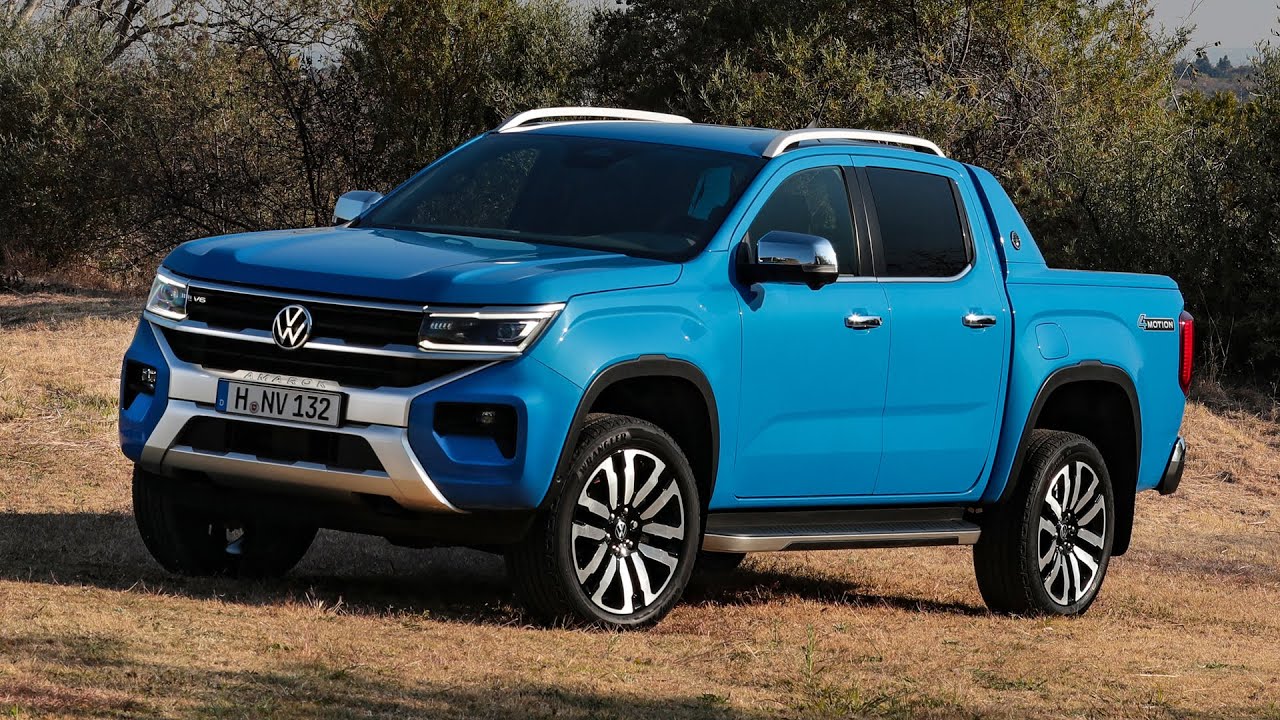 2023 Volkswagen Amarok – Interior, Exterior and Off-road Driving. It’s been away for two years, but the Volkswagen Amarok has finally returned as an all-new model. As with its predecessor, the Amarok will focus more on the premium end of the pick-up market, filling a void that was left by the short-lived Mercedes X-Class, as well as top-spec versions of the Amarok’s main rivals, the Ford Ranger and Toyota Hilux.

The new Amarok has been co-developed with the Ford Ranger, but the two trucks are distinctly different in terms of style. The only parts that are shared are the centre section of the bodyshell, from the base of the windscreen to the back of the passenger cab, and the roof rails, where fitted, everything else is unique to the specific model, even the door skins.

Up front, the Amarok has a high-set, grille design that stretches across the front of the truck and has plenty in common with VW’s SUV range. There are squared-off wheelarch blisters, while the rear end has C-shaped tail-lights and the Amarok name stamped into the tailgate.

Inside, the Virtual Cockpit digital instrument cluster and large portrait-style touchscreen are shared with the Ranger – as are the column stalks and window switches – but the rest of the cabin is of VW’s own design, and has been given a premium edge. The steering wheel is similar to that found in VW’s passenger cars, while the Amarok will use VW’s own operating system, which includes climate controls within the large touchscreen.

For the global launch, Volkswagen has confirmed two body styles, five engine options and a choice of manual or automatic gearboxes, although which versions come to the UK will be confirmed closer to launch in early 2023.

The Amarok measures 5,350mm long, 1,910mm wide and has a 3,270mm wheelbase, all figures that are larger than the old model’s, so there’s more room in the cab and in the bed, too. Here the new Amarok will be able to take payloads of up to 1.16 tonnes, while heavy-duty lashing eyes that can cope with loads of up to 500kg are fitted. VW is also offering an electrically-operated roll-top load cover to keep items in the bed hidden from sight. A 3.5-tonne towing weight is also on offer.

As well as a five-seat double-cab pick-up, VW has taken advantage of the tie-up with Ford to offer a single cab model with a longer load bed, too. This can take two Europallets compared with the single Europallet that can be fitted in the bed of the double cab model. As well as two body options, VW will offer a range of accessories, including load covers, towing equipment, cycle racks and even a four-berth roof tent – the roof is rated to carry up to 350kg.

The engine range kicks off with a 148bhp 2.0 TDI four-cylinder diesel, then there’s a 168bhp version of that unit and a BiTDI twin-turbodiesel with either 201bhp or 206bhp, depending on market. At the top of the range, the 3.0-litre V6 TDI has either 238bhp or 247bhp, again depending on market. VW will also offer a 298bhp 2.3 TSI four-cylinder petrol for certain markets, which is a rebranded version of Ford’s EcoBoost four-cylinder engine previously seen in the Ford Mustang and Focus ST/RS. We’ll have more information on which of these engines will be sold in the UK closer to the truck’s launch here.

All engines over 206bhp will come with a 10-speed automatic gearbox, while lower-spec cars have a choice of six-speed manual and auto transmissions. As before, 4MOTION four-wheel drive is on offer, with European-spec trucks featuring permanent 4WD as standard.

Standard safety kit has been uprated significantly over the old Amarok, with VW claiming that 20 new driver assist systems have been fitted. These include adaptive cruise control with road sign recognition, LED matrix headlights, front monitoring with pedestrian detection, park assist and surround view cameras all on offer.

Final UK specs will be confirmed closer to launch, but VW will offer the new truck in five trim levels globally – the standard Amarok, then Life, Style, PanAmericana and Aventura variants. Of the top-spec models, the PanAmericana offers a rugged look, with what VW calls an ‘X-design’ front end, 18-inch black alloy wheels, a roll bar in the bed and black exterior trim. The Aventura is a more road-biased set-up, and while it also carries the X-design nose, it adds 20-inch wheels, chrome exterior trim and a plusher cabin.

Further details on Amarok price, trim, fuel economy and emissions will be revealed at a later date, before it goes on sale in 2023.
———
Hope you enjoy this video and leave your comment bellow. To stay up to date with alot of new Videos