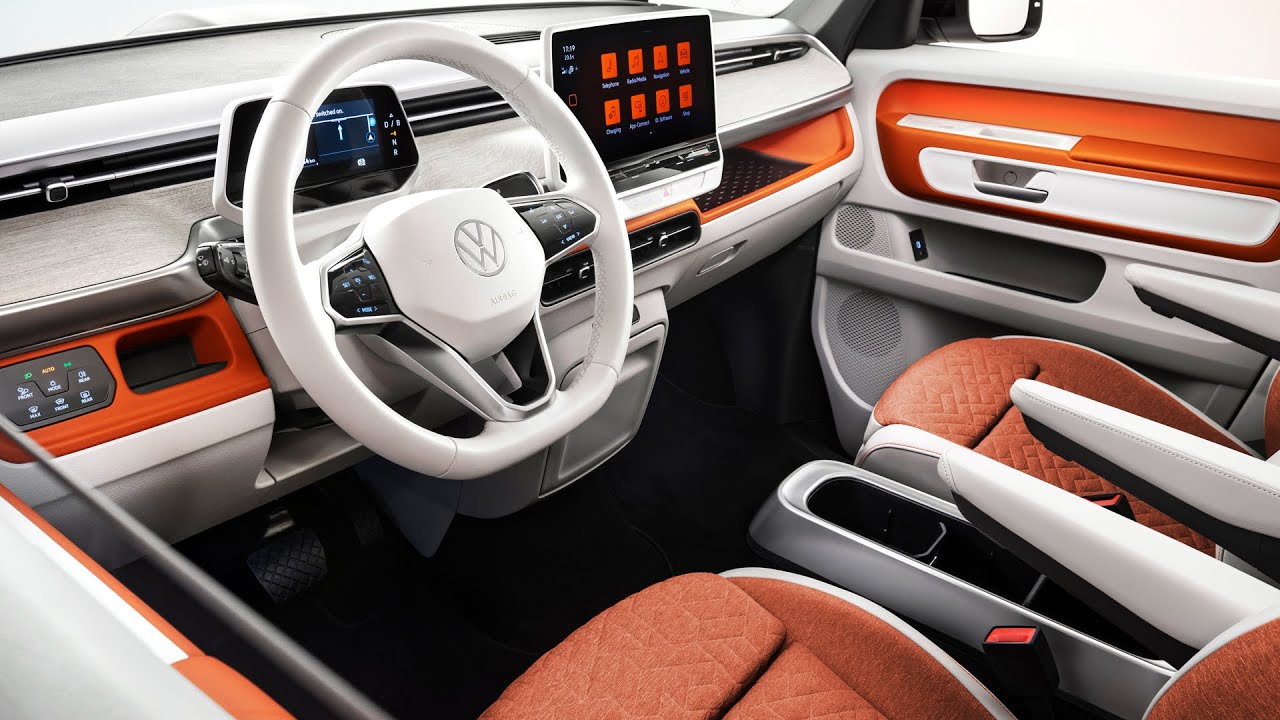 2023 Volkswagen ID. Buzz INTERIOR – Features, Design. After five years, the Volkswagen ID. Buzz has finally been revealed in production specification. Yes, the wait is over (mostly, more on that in a bit) for the electric microbus revival. And in all that time, the van has managed to maintain most of the exterior design of the concept, and it still holds on to the name born by the concept: ID. Buzz. So as far as we know, it’s the only ID. model with a word suffix rather than a number.

From the outside, it’s clearly related to its precursor, particularly when wearing the optional two-tone paint scheme. It has similar slender headlights and taillights that blend into the character line that splits the top and bottom sections of the van. It has the myriad diamond openings in the lower front fascia for the air intakes. The rear pillars are a little thicker and feature strakes that are inspired by the rear air intakes of the original rear-engine vans. It’s also very cab-forward in its shape. There are of course differences, such as the addition of the corporate light bar across the nose and the rear hatch, and it’s a little less rounded in shape, likely for practicality reasons. The pillars are all hidden, too, to give it a semi-floating roof look.

Inside, the van looks much more like a modern VW. It gets a standard 10-inch Digital Cockpit instrument screen as well as a 10-inch touchscreen for infotainment. A 12-inch unit is available as an option. Also appearing are the touch buttons for climate control, which we haven’t enjoyed in other VWs. The indicator light from the ID.4 makes a return providing visual cues for all variety of functions. It’s not all modern VW inside, though. Available as an option is a two-tone interior that matches the exterior.

On the subject of color, there are four two-tone options, all of which use Candy White for the upper color. They include Lime Yellow and Energetic Orange, which you see on the short-wheelbase passenger van shown at top. Also available are Bay Leaf Green and Starlight Blue, the latter of which is shown on the ID. Buzz Cargo shown above. All four of these colors can be had in single-color configurations, too, and joining them as options are Candy White, Mono Silver and Deep Black.

A variety of ID. Buzz configurations will be available, but only one is coming to the U.S. In Europe, the Buzz will launch in the third quarter of this year in the short-wheelbase form either as the commercial cargo van with a three-seat front bench or the two-row passenger van, which has two seats up front and a three-seat rear bench. Later, a six-seat three-row version of the short-wheelbase model will go on sale with second-row bucket seats. In 2023, VW will reveal the long-wheelbase version with three rows and seven seats. This is the version that the U.S. will get, but it won’t reach dealers until 2024 as a 2025 model.

Only one powertrain has been announced for the ID. Buzz so far. It’s the same rear-motor, rear-wheel-drive layout from the base ID.4. The motor makes 201 horsepower and 229 pound-feet of torque. The battery is the 82-kWh unit from the ID.4, with 77-kWh available for use. Charging rates are 11 kW for AC charging and 170 kW for DC fast charging. VW has said additional battery options will come later, and as it’s built on the same MEB architecture as other ID. models, it seems likely a dual-motor, all-wheel-drive variant with 302 horsepower could come in the future.

Pricing for the ID. Buzz hasn’t been announced. On the preview drive VW held in the U.K., the company said it was targeting £50,000 with the cargo version around £42,000. We’re sure the U.S. version will start higher than the ID.4, which starts around $42,000, simply because of its extra size. But we’ll surely know more between now and the couple of years before our long-wheelbase versions are ready.

IQ.Light 00:00
Candy White/ Energetic Orange 00:45
Candy White/ Pomelo Yellow 03:16
———
Hope you enjoy this video and leave your comment bellow. To stay up to date with alot of new Videos