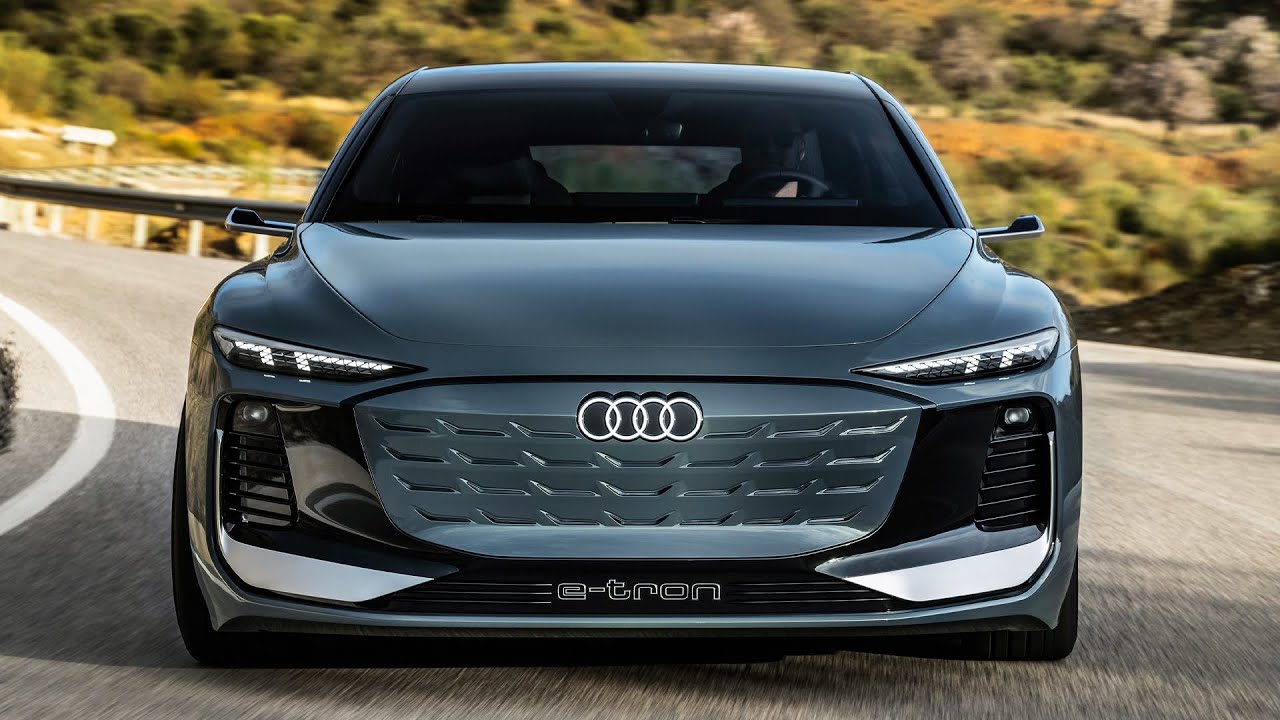 2024 Audi A6 Avant e-tron lights – Matrix LED and OLED lighting tech. If you remember last year’s Audi A6 e-tron concept, which previewed an electric version of the company’s mid-size sedan, then the A6 Avant e-tron concept revealed today will feel familiar. This stylish concept teases a wagon variant of the electric A6 due in 2024 and features much of the same design and technology seen on the first A6 e-tron concept—but the long roof makes it even more fetching to our eye.

The A6 Avant e-tron is similar in length to the gas-powered A6 wagon—which is currently offered in the United States as a lifted Allroad model and a high-performance RS6 Avant—but it is wider than the beefy RS6 and two inches lower. Audi claims a coefficient of drag of just 0.24. The classic Audi grille hides air intakes for cooling the battery, motors, and brakes as well as air curtains to smoothly channel air around the side of the vehicle. Compared to the A6 e-tron sedan, the rear diffuser gets more pronounced tunnels to reduce lift.

The A6 e-tron and Avant will ride on the Volkswagen Group’s scalable PPE platform, which will also underpin an electric Porsche Macan and an Audi Q6 e-tron SUV. This new architecture includes an 800-volt system and up to 270 kilowatts of charging capacity. Audi says this will allow the electric A6 to gain around 186 miles of range in just 10 minutes when connected to a fast charger. Going from five to 80 percent will take under 25 minutes, Audi claims.

The A6 Avant e-tron features an approximately 100.0-kWh battery, with Audi aiming for up to 435 miles of range on the European WLTP test cycle for the production car. Like the sedan, the A6 Avant e-tron features two electric motors good for a total of 469 horsepower and 590 pound-feet of torque. The quickest A6 Avant e-tron models will hit 62 mph in under four seconds, and even entry-level models will sprint to 62 mph in under seven seconds, Audi claims. The PPE architecture will allow for both single-motor rear-wheel-drive and dual-motor configurations with all-wheel drive. The car rides on air suspension and 22-inch wheels and gets cameras instead of side-view mirrors, a feature that is still not legal in the U.S.

Also like the sedan, the matrix LED and OLED lighting tech on the A6 Avant e-tron provides lots of fun party tricks. Projectors in the side of the body greet passengers with messages cast onto the ground beside the vehicle, and they can also project practical messages such as a warning symbol to oncoming cyclists that someone is about to open the door. Audi even says that, when the vehicle is parked, the projectors can display a video game on a wall while the passengers play inside.

The concept represents around 95 percent of the production design, and Audi said “never say never,” when asked about the wagon’s U.S. availability. The company hinted that we will get versions “positioned a little bit higher,” which likely refers to ride height and insinuates a future Allroad variant. There also may be a high-performance RS model sold stateside. When the A6 Avant e-tron arrives in 2024, it will be sold alongside the combustion-engine A6.
———
Hope you enjoy this video and leave your comment bellow. To stay up to date with alot of new Videos