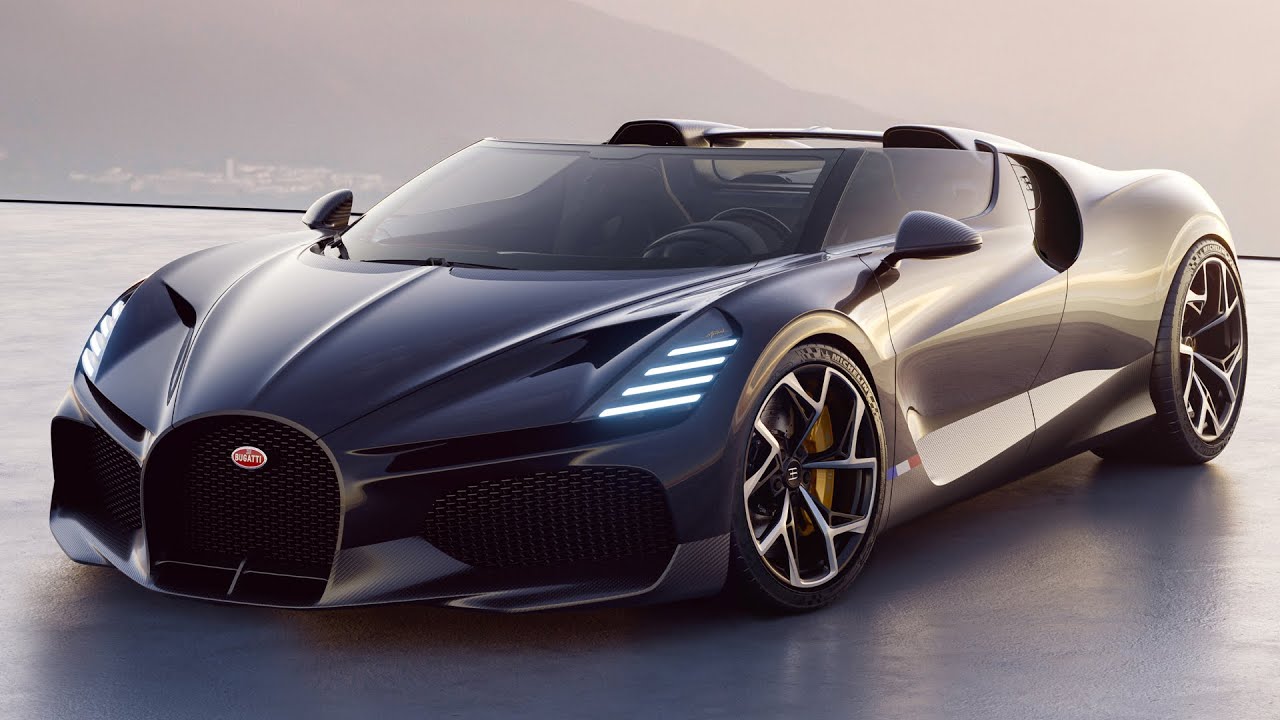 2024 BUGATTI W16 MISTRAL – First Look / Exterior and Interior. The W16 era is ending as Bugatti is bidding adieu to the quad-turbo, 8.0-liter engine with the Mistral. The Chiron-based roadster is named after a wind blowing from the Rhône River valley that also served as inspiration in the 1960s for a namesake coupe/convertible sold by Maserati (and a 1990s Nissan Mistral in Japan). Speaking of past cars, the roofless machine from Molsheim boasts design cues derived from the Type 57 Roadster Grand Raid.

The 1930s influence can be seen in the curving windscreen as well as the roof-mounted dual air scoops to cool the engine. While the styling harkens back to a classic model, the Mistral does seem like a combination between the Divo and La Voiture Noire in a roadster package with an “X” motif for the taillights reminding us of the track-only Bolide. The rear light configuration has allowed Bugatti to install vents in between the X beams for cooling purposes.

For the first time in a W16 Bugatti, woven leather was used on the door cards. In addition, the gear shifter machined from a solid block of aluminum has wood accents and an amber insert depicting Rembrandt Bugatti’s “dancing elephant” also found on the Type 41 Royale roadster’s hood. Of course, the cabin’s real highlight is removing the roof to hear the W16 and its four turbochargers at work.

It’s highly plausible the Mistral will go faster than the Veyron GSV considering it has an advantage of nearly 400 horsepower. Whether an actual top-speed run will take place remains to be seen considering Bugatti said a while back it’s no longer interested in chasing records. We do know Hennessey wants some of that action with the new Venom F5 Roadster it unveiled this week.

Bugatti will make only 99 units of the Mistral and plans to kick off deliveries in 2024 when the first of the 40 Bolide track cars are also destined to reach their rightful owners. While the Bolide was available for €4 million apiece, the Mistral had a sticker price of €5 million. “Had” because all of them have already been spoken for.

Source: Bugatti
———
Hope you enjoy this video and leave your comment bellow. To stay up to date with alot of new Videos