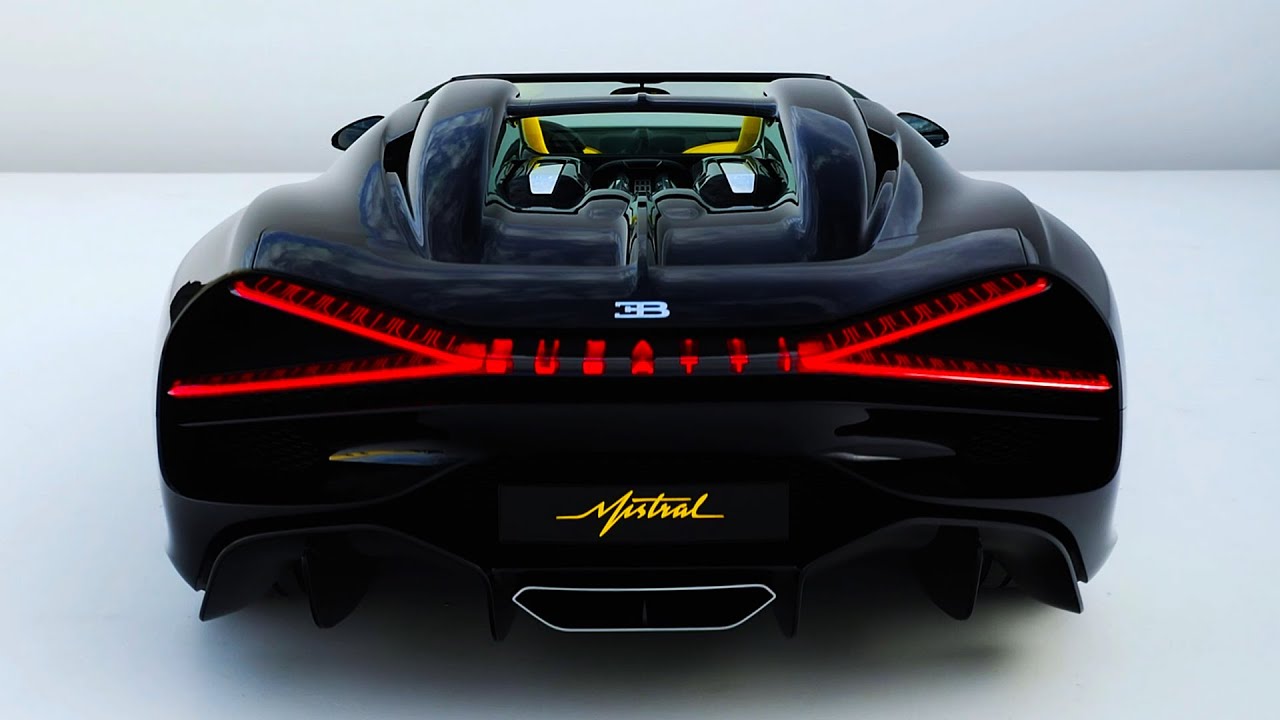 The Mistral, which is named after a wind in the south of France, and a badge previously used by Maserati, is Bugatti’s first open-top take on the Chiron, and the company’s first roadster since the Veyron Grand Sport Vitesse went out of production in 2015. Bugatti says 99 cars will be built, but customers can expect to wait until early 2024 to take delivery.

But Bugatti is clear that it has designed the Mistral to be the fastest convertible in the world. The company set a production car record of 254 mph (409 km/h) with the Grand Sport Vitesse in 2013 and believes that record still stands, though Hennessey took its Venom GT Spyder to 256.6 mph (413 km/h) in 2016 and is gunning for close to 300 mph (483 km/h) with the new Venom F5 Spyder unveiled this week at Monterey. The fact that Buggati says the new car’s instruments are designed to be “easily visible at up to 420 km/h (260 mph)” suggests Hennessey might have this one in the bag.

Although the engine and platform are shared with the Chiron, the Mistral appears radically different from the marque’s other cars. But returning briefly to the Maserati theme, we can’t help think it looks like an MC20 Cielo that just sat on a hot poker. Oooohhh! Bugatti, for what it’s worth, says it took inspiration form the 1934 Type 57 Roadster Grand Raid, but the Mistral isn’t an overtly retro car like the EB110-aping Centodieci is, instead offering only subtle references to the brand’s back catalogue.

The launch example of the Mistral borrows the Grand Raid’s yellow and black color scheme, a combination employed by Ettore Bugatti on many of his personal cars, and you can see echoes of the old car in the aggressively raked windshield, which wraps around the Mistral’s cockpit like a helmet visor. The new roof-mounted air intakes also tip a hat to the twin headrest humps on the Grand Raid’s rear deck, and those on this car’s Veyron Grand Sport predecessor, while providing rollover protection.

Losing the roof also meant losing the Chiron’s huge C-shape styling flourish that curls from above the door glass to the base of the door itself. But the C-motif is still there, only this time it runs from the upper window-line, pulls a one-eighty at the small air intake in the rear quarter panel, then heads back towards the nose through the middle of the door.

The front end is dominated by a huge horseshoe air intake that looks like it’s going to pop a model steam train out at any minute, but also calls to mind cold-war fighter jets like the MiG-15. It makes even the outlandish grille treatments of the Divo and La Voiture Noire seem reserved, and is sure to prove controversial, but it certainly gives the Mistral a unique character, and the stylish headlights, which feature horizontal LED strips, are bound to end up being copied.

Regardless of whether or not you love the Mistral’s face, you’re almost certain to like its ass. There’s a hint of Lotus Evija about the gaping cavities behind each rear wheel that vent hot air from the side-mounted oil coolers, but even if you didn’t notice that the rear LED lights have the same X-shape as those of the Bolide track car, you’ll be able to pick out the Bugatti name in the central light strip.

Inside the Mistral, things are less outlandish. The dashboard and interior fittings are mostly lifted straight from the Chiron, which is only a minor disappointment since that car sets global standards for material quality, using billet aluminum and titanium for parts that are plastic in lesser cars. But in acknowledgement of its ancestors, the Mistral does feature wood and an amber insert containing the ‘dancing elephant’ sculpture created by Ettore’s older brother Rembrandt at the dawn of the last century.

Do you think the Mistral is a fitting finale for Bugatti’s W16 engine and the brand’s combustion era, and what do you think of that face? Leave a comment and let us know.

Source: Bugatti
———
Hope you enjoy this video and leave your comment bellow. To stay up to date with alot of new Videos