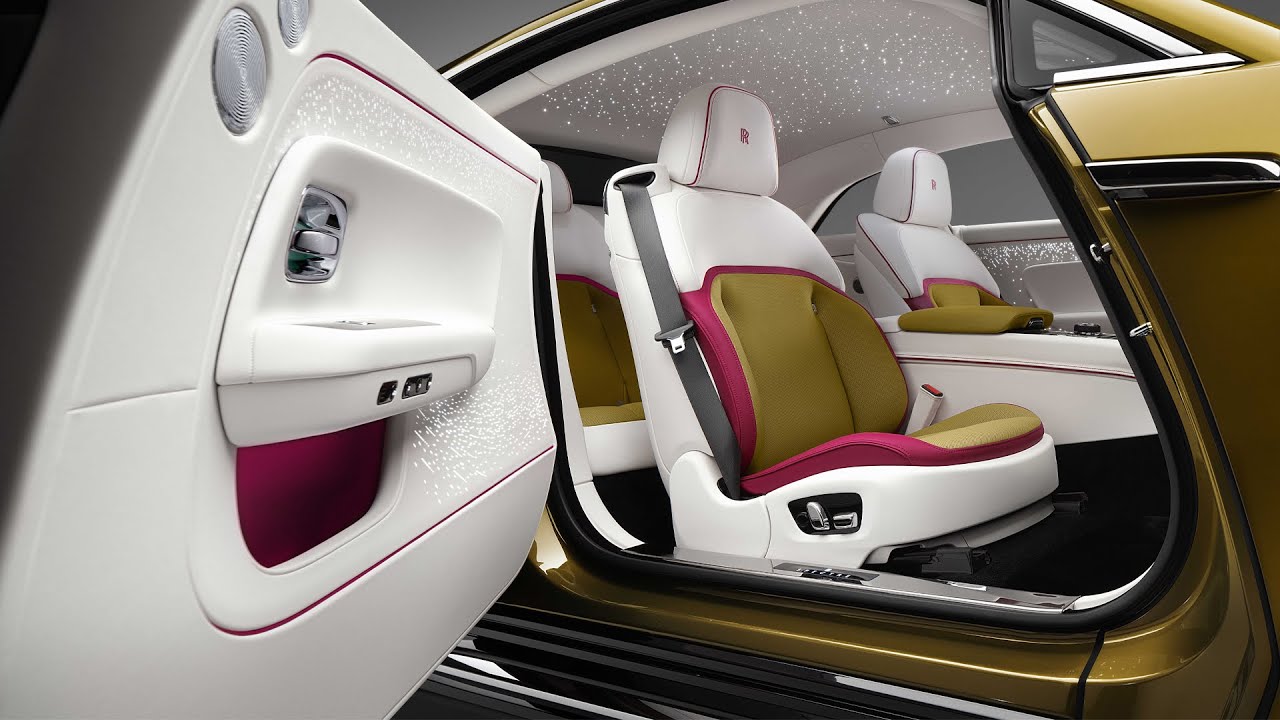 2024 Rolls-Royce Spectre – Exterior and Interior / Super-luxury electric coupe. Rolls-Royce has unveiled the Spectre in its production specification just moments ago. This is the first-ever Rolls-Royce without an internal combustion engine, as it is the company’s first EV. It is a four-seat coupé that resembles the Wraith, and it was showcased in a distinctive color scheme.
From a technical perspective, Rolls-Royce has noted that the final figures for range, power, and acceleration are still being refined. Preliminary data announces an all-electric range of 320 miles (ca. 520 km) in the WLTP cycle.

The first EV from Rolls-Royce was first shown in a dark gold body with a black hood, roof, and trunk lid. On the inside, we have the special Starlight headlining, which also covers the upper parts of the door cards, but on a white background.

Since we are on this topic, the Spectre will have the largest coach doors ever seen on a model from this brand, with about 59 inches in length (ca. 1.5 meters).

The upholstery is cream white, but it has pink accents, which are continued in the form of embroidered Rolls-Royce logos on the headrests, as well as in the form of pink stitching.

The exterior color is also present in onboard leather, on the lower parts of the backrests, as well as on the seats. The result is a striking color combination if you ask us, but ditching the V12 in a Rolls-Royce for electric drive is a decision to match, so it does make sense.

From a styling perspective, the Spectre does look a lot like the Wraith, which is somewhat expected, as both models are coupés, and both follow the company’s design language.

The headlights are thinner than ever before, and the LED daytime running lights have been integrated right between the grille and the line that splits the bumper from the fenders and the hood, which results into an aggressive look.

As usual, we spot a set of massive alloy wheels, 23-inch ones, which have an intricate design, and the Rolls-Royce badge will always stay upright on these, no matter if the wheels move forward or backward.

Those who have seen a modern Rolls-Royce in real life can attest to how this feature operates. Ever since the 1926 Bugatti Royale, the Rolls-Royce Spectre is the first coupé with such large alloy wheels from the factory.

Rolls-Royce has mentioned that the Spectre has a drag coefficient of just 0.25, and this result required modifying the Spirit of Ecstasy statuette.

The Spectre is built on the Architecture of Luxury platform, which is a modular aluminum space frame that is shared with the Ghost, Phantom, and Cullinan. The British marque describes the Spectre as the pinnacle of EV engineering within the BMW Group, so expectations are high.

The first customer cars will be delivered in the fourth quarter of 2023, but customers can already commission one at their preferred Rolls-Royce dealer.
———
Hope you enjoy this video and leave your comment bellow. To stay up to date with alot of new Videos