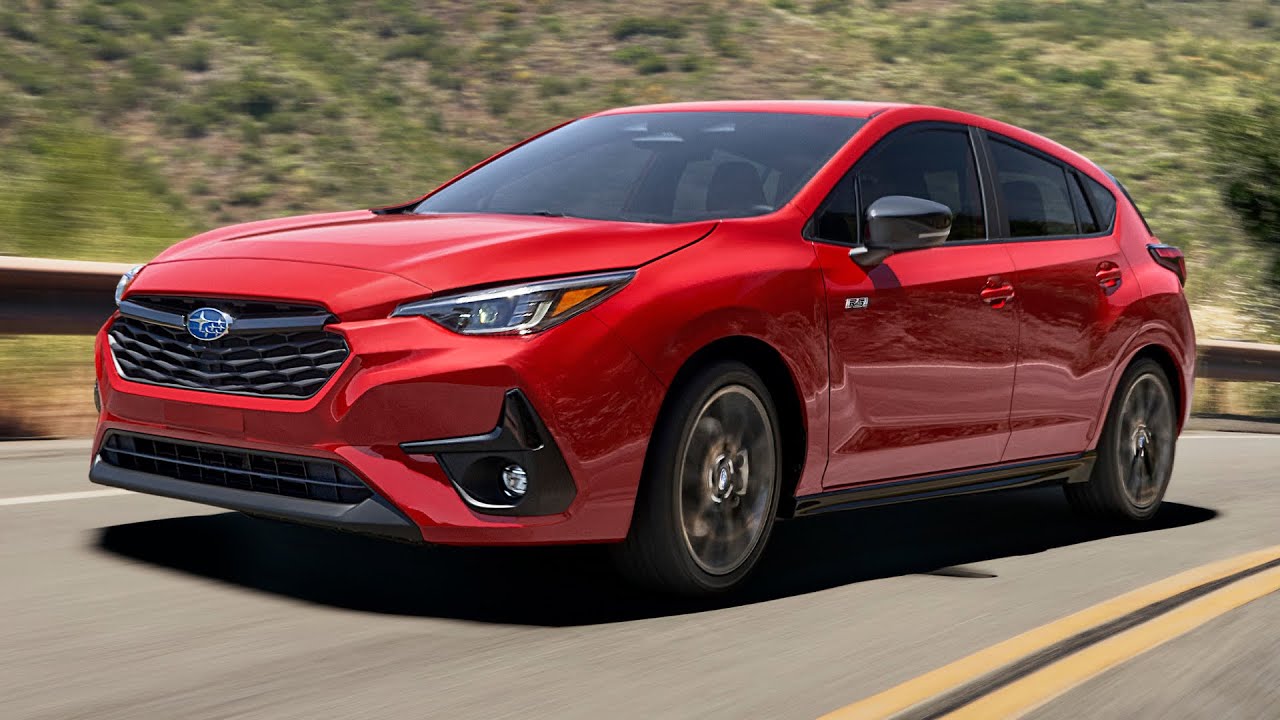 2024 Subaru Impreza Sport & Impreza RS – Features, Exterior and Interior. The Subaru Impreza is entering its sixth generation with a slimmed-down lineup that pivots in its focus, dropping the Premium and Limited models and adding a new more powerful RS trim that joins the base version and the Sport. The RS receives the 182-hp 2.5-liter four-cylinder engine found in the Crosstrek, giving it an additional 30 horsepower and 33 pound-feet of torque compared with the other Impreza models.

The 2024 Impreza’s styling updates the same familiar design. The grille stretches taller and swaps out chrome trim for a more muted black piece. More pronounced rear-wheel arches give a slightly sportier look. Also at the rear, the taillights have been refreshed with a design that does not protrude as much into the rear hatch. The RS model also gets an RS badge to mark its significance.

New Features, Hatch Only
When the third-generation WRX made its debut last year, Subaru announced that the WRX would be offered only as a sedan. Now, the company has chosen to make the sixth-generation Impreza exclusively a hatchback, further differentiating the two models. It’s a move that makes logical sense; in 2022, a spokesperson told Car and Driver, the hatchback made up 73 percent of Impreza sales.

Subaru has updated its EyeSight driver-assist tech for the Impreza so that it now recognizes cyclists and pedestrians more quickly, as well as widening the field of view. The new Impreza takes a stab at additional comfort with reduced noise in the cabin and front seats that are claimed to be more supportive. Subaru is bringing its 11.6-inch vertical center screen to the Impreza, bringing the car in line with the rest of the lineup. Previously, the largest infotainment screen available on the Impreza was 8.0 inches.

No Manual Option
The Base and Sport trim levels return with the same 2.0-liter horizontally opposed four-cylinder engine again producing 152 horsepower and 145 pound-feet of torque. Subaru is dropping the five-speed manual transmission, leaving only the CVT. Normally we would lament the passing of a manual gearbox, but the five-speed was so imprecise that it won’t be missed. The Sport and RS trims will receive paddle shifters and a simulated “manual mode” allowing drivers to select eight preset ratios. All-wheel drive is standard and has been upgraded with a new active torque vectoring system. The car also receives a version of the dual-pinion electronic steering rack from the WRX, which should improve steering feel, and Subaru also claims the 2024 Impreza has 10 percent more structural rigidity thanks to a redesigned, lighter inner frame.

A Return of the RS
It’s a welcome move that Subaru is bringing back the RS badge and bringing the Crosstrek’s 182-hp 2.5-liter engine to the Impreza. In our testing, that engine accelerated the Crosstrek to 60 mph in 7.5 seconds, whereas the Impreza with its 152-hp 2.0-liter takes just shy of nine seconds to reach 60 mph.

Apart from more power, the RS gets some styling changes to help distinguish it from the lesser trims. RS badging can be found on the front doors and rear hatch. The RS swaps body-color side mirrors and rocker panel molding for black replacements. The interior has simulated carbon and gunmetal trim pieces. The front seats are finished in black cloth with red bolstering, while the steering wheel and shifter get an upgraded leather finish. The carpeted floor mats feature the RS logo.

It’s certainly still no thrill-seeking hot hatch, but thankfully Subaru added a bit more pep to its step. Subaru hasn’t given any pricing details yet, but the 2023 model starts at $20,815 and we expect the newer vehicle will come at a small increase from that. According to Subaru, the 2024 Impreza will go on sale beginning in the spring.