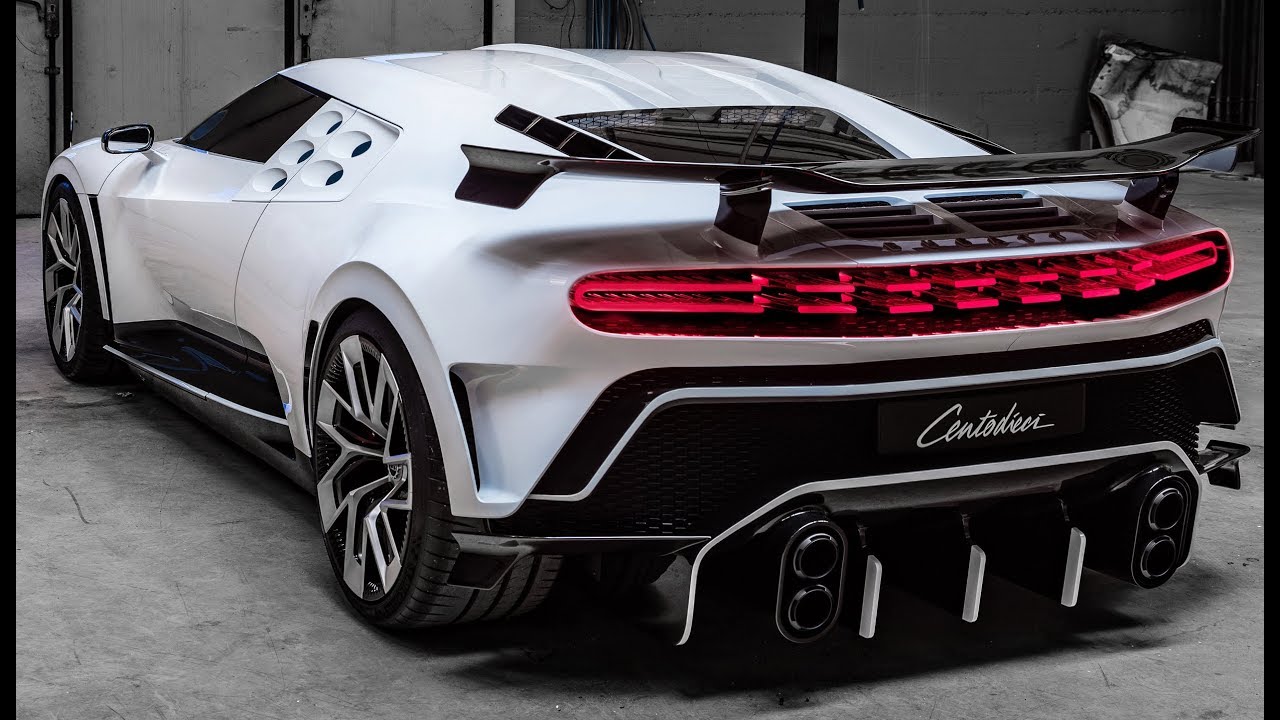 $9 million, 1,578 hp Bugatti Centodieci – Bugatti’s most powerful car. The 2020 Bugatti Centodieci celebrates a car that has long divided Bugattists. Most default to the neat little Type 35 grand prix cars, or the gigantic Type 40 Royales, or the impossibly elegant Type 57 Atlantic coupes when asked to nominate the marque’s definitive cars. The EB110 and EB110SS models, conceived by Italian entrepreneur and enthusiast Romano Artioli, who acquired the rights to the Bugatti name in the late 1980s, have never been treated with the same respect as the masterpieces of the automotive art from Le Patron himself, Ettore Bugatti. Until now.

“With the Centodieci, we pay homage to the EB110, which is very much a part of our tradition-steeped history,” says Bugatti president Stephan Winkelmann. “With the EB110, Bugatti catapulted itself to the top of the automotive world once again.”

Essentially a rebodied Chiron with slightly more power, the Centodieci channels the spirit of a car that in truth has a lot more in common with today’s Bugattis than the prewar icons. Just 128 EB110 and EB110SS models were produced between 1991 and 1995 in an extraordinary factory built by Artioli in Campogalliano, Italy. Powered by a mid-mounted 3.5-liter, quad-turbo V-12 engine that delivered 603 hp in SS trim, this all-wheel-drive, carbon-fiber Bugatti would sprint from 0 to 60 mph in just over 3 seconds and reach a top speed of 218 mph.

The all-wheel-drive, carbon-fiber Centodieci’s mid-mounted turbocharged 8.0-liter W-16 develops 1,578 hp, the 99-hp bump over the regular Chiron facilitated by improved cooling of the engine’s oil system. It’s also 44 pounds lighter than a Chiron, thanks to more extensive use of carbon fiber and a lightweight windshield, giving it a power-to-weight ratio of about 2.5 pounds per horsepower. Bugatti claims 0-60 mph in less than 2.4 seconds, 0-124 mph in 6.1 seconds, and 0-186 mph in 13.1 seconds. Top speed is electronically limited to 236 mph. The Centodieci also generates the same downforce as the track-focused Divo and, says Bugatti, delivers similar levels of lateral acceleration.

Style, not substance, is the Centodieci’s main selling point, however. (And in case you’re wondering, only 10 will be built, and all are already sold, despite its staggering before-tax $9 million price tag.) Whereas the Chiron has a uniquely relaxed beltline that falls away from the top of the front fender toward the rear of the car, the Centodieci’s gesture is aggressively wedged in traditional Italian supercar style. Yes, every panel, every surface, every detail on the Centodieci is different, and it’s 0.4 inch wider, 0.4 inch lower, with 0.6 inch more tumblehome in the side glass, but it’s this gesture that most makes it look like a completely new car.

The hardest thing about doing an homage, says Bugatti design chief Achim Anscheidt, is not to be trapped by the past. “We faced a number of technical challenges in terms of the development and design of the Centodieci,” he acknowledges. “The EB110 is a very flat, wedge-shaped and graphically quasi-two-dimensional super sports car of the late 1980s. Transporting this classic look into the new millennium without copying it was technically complex, to say the least.”

The “cheese grater” venting at the B-pillar is an obvious nod to the EB110SS, but other tells are more subtle. The iconic horseshoe grille is much smaller than that of either the Veyron or Chiron, but it’s larger and better integrated into the design than the tiny, almost afterthought, grille on the EB110. The venting across the rear of the EB110 has been reinterpreted as a blocky, geometric light graphic spanning the Centodieci’s rump. And the NACA ducts on the top surface of the rear fenders on the EB110 can now be found on the roof of the Centodieci, directing cooling air into an engine bay that, unlike the Chiron, is now covered in glass. The Centodieci acknowledges the past but also stands on its own as a contemporary design.