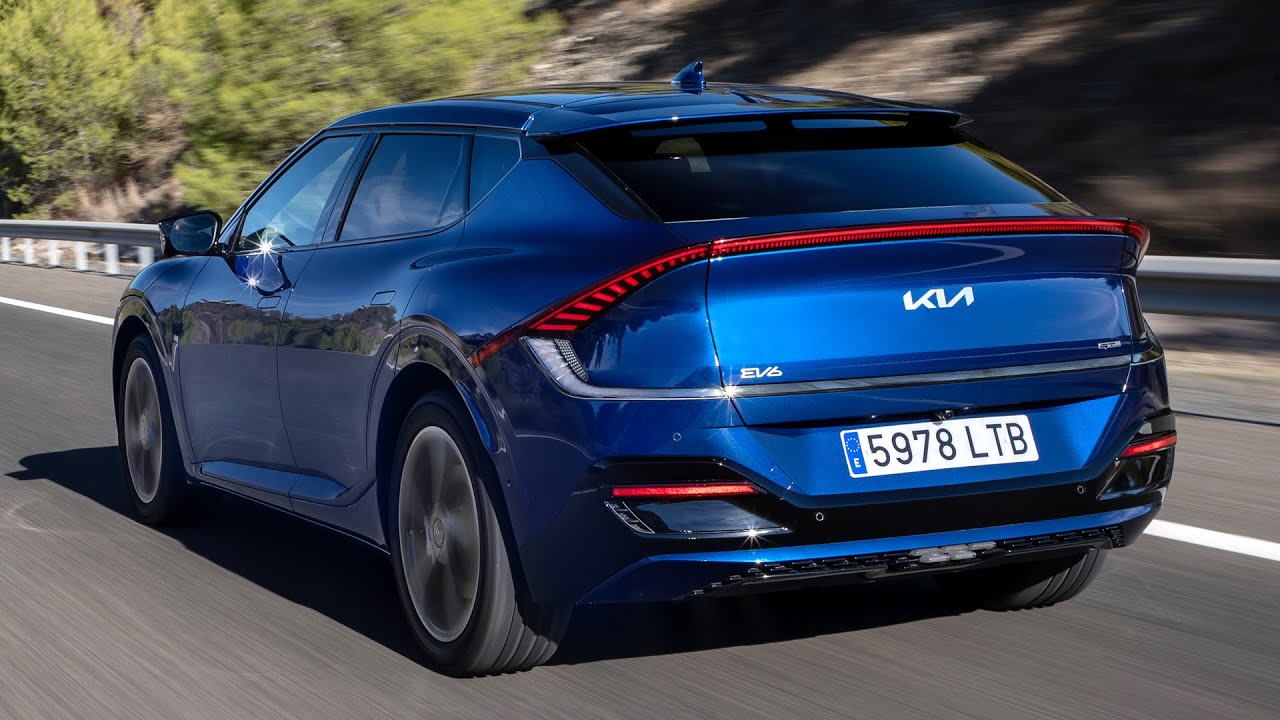 All New 2022 Kia EV6 – Walkaround & Review / Wonderful EV Crossover. The new Kia EV6 is now on sale starting from £40,895, with the first customer cars expected to arrive in October. The brand’s new flagship EV sits above the Kia e-Niro SUV and is capable of up to 328 miles of range on a single charge. A performance-focused GT version of the EV6 will follow the regular car next year and will be the fastest ever model from the brand, managing 0-62mph in 3.5 seconds.

The EV6 is the first of 11 new electric models slated to arrive by 2026 and joins the e-Niro and Soul models in the Korean brand’s electric car lineup. When it goes on sale, direct rivals will include the Ford Mustang Mach-E, Volkswagen ID.4 and the Tesla Model Y.

All UK models of Kia’s striking new crossover will be available with a 77.4kWh battery, instead of the entry-level 58kWh version offered in other markets, and either rear or all-wheel drive. The entry-level, rear-wheel drive EV6, which is powered by a 226bhp electric motor, can travel up to 328 miles on a single charge.

A more powerful 321bhp powertrain is available for the higher GT Line and GT-Line S trims and cuts range to 314 miles, while the flagship GT model due in 2022 will have 577bhp but a reduced range of 251 miles.

The entry-point to the range is simply called ‘EV6’. It’s only available in rear-wheel drive and starts from £40,895. It has a long list of standard equipment, including LED headlights, tail-lights and daytime running lights. A set of 19-inch alloy wheels are fitted, along with rear parking sensors, electrical folding door mirrors and automatic wipers. The interior features black faux leather-trimmed seats, heating for the front seats and steering wheel, ambient lighting and dual-zone automatic air conditioning.

Standard safety features include navigation-based smart cruise control which can accelerate and brake the car in traffic. Forward collision avoidance is also fitted, with pedestrian and cyclist detection, and highway driving assist.

The GT-Line model starts from £43,895 in rear-wheel drive, 226bhp guise, with the 321bhp four-wheel-drive version priced from £47,395. The more powerful car can sprint from 0-62mph in 5.2 seconds but range drops marginally to 314 miles due to the increased performance. Additions include rear privacy glass, front parking sensors, dual LED headlights and a GT-Line-specific styling package. Interior upgrades include ‘premium relaxation seats’ in the front with memory function, which can be reclined flat for the driver and passenger to rest while charging. Suede and faux leather trim and aluminium pedals also feature, along with a wireless smartphone charging pad. The GT-Line spec also adds blind-spot collision warning.

The standard equipment list is swelled further still for the GT-Line S model, which gets 20-inch alloy wheels, a powered tailgate and a panoramic sunroof. Other additions include ventilated and heated front seats, heating for the outer rear seats and a premium 14-speaker Meridian stereo system.

Kia has announced that the flagship GT model will be priced from £58,295. This may seem expensive for a Kia but it is around £25,000 less than a Porsche Taycan 4S, which offers similar straight-line performance. It’s set to go on sale in 2022 with deliveries expected that summer.

Kia has revealed that the GT will have the quickest acceleration of any production Kia ever made. It’ll be powered by two electric motors that produce 577bhp, which will propel the EV6 from 0-62mph in just 3.5 seconds – comparable with a Porsche Taycan or Tesla Model X – and on to a top speed of 162mph. It’s worth noting, however, that the claimed range will fall to 251 miles.

The GT will ride on 21-inch alloy wheels and boast sportier exterior styling to separate it from the rest of the range. It will also lose the GT-Line S’s panoramic sunroof to save on weight and have black suede bucket seats with neon green detailing instead of the base model’s sports seats. Standard equipment will include upgraded tech such as electronically controlled suspension with an electronic limited-slip differential and a drive-mode controller.

A battery heat pump is also standard on the GT, which is designed to maximise the car’s driving range in cold weather. It’s an option on the GT-Line and GT-Line S models. We’re told that you’ll be able to achieve 80% of the car’s quoted range in temperatures as low as -7 with the pump fitted.