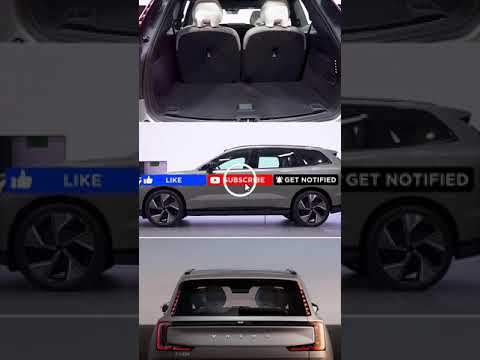 All New 2024 VOLVO EX90 – Volvo’s electric flagship 7-Seater SUV. Volvo’s electric future takes a big jump with the new 2024 EX90. Although plug-in hybrids are all over Volvo’s 2023 lineup, the 2024 EX90 is the new flagship SUV from Volvo, one filled with the most advanced safety tech the Swedish automaker can engineer. It’s been years since Volvo has introduced a truly new SUV, and we’re excited to experience the 2024 EX90.

The EX90 isn’t Volvo’s first electric SUV, and although we were a little disappointed with the range of the XC40 Recharge and C40 Recharge, that won’t be the case with the EX90. Volvo fits the newcomer with a 111-kWh battery—way bigger than the other SUVs’ capacity of 78 kWh. At launch, the big battery will be hooked up to a pair of electric motors delivering a combined output of up to 496 hp and 671 lb-ft of torque, which will make this the torquiest and most powerful Volvo ever. A 402-hp model with 568 lb-ft will also be offered.

With the 111-kWh battery and twin-motor AWD, the Volvo has a range of up to 300 miles. According to the automaker, buyers should be able to charge from 10 to 80 percent in around 30 minutes. Volvo installed all the hardware necessary for bi-directional charging, too, so in the future, owners could use the EX90 to power their home in an emergency.

The 2024 Volvo EX90 will have three-row seating as available or standard equipment. Volvo’s new flagship rides on a new EV-specific platform that can offer more interior space than a model that starts life as a gas-powered SUV and is later converted to be an EV, so we’re hoping for more space inside than in the XC90. Previously thought to be called the Embla, the EX90 is just the first of Volvo’s upcoming purpose-built EVs.

Volvo is going all-in on safety technology with the 2024 EX90. Shielding you from danger with cameras, radar, and lidar, the EX90 is designed to lessen the chances you’ll get into an accident or reduce the severity for you and pedestrians if a collision is inevitable. That may not sound impressive or new, but Volvo gets very specific with the EX90’s advanced tech. The automaker says their sensors and software can reduce accidents that end in serious injury or death by up to 20 percent and avoid crashes altogether by up to 9 percent. On a more basic level, we hope that means the 2024 EX90 will perform well in IIHS and NHTSA testing, too.

The 2024 Volvo EX90 also includes the most advanced tech the automaker has to determine whether you are distracted or overly tired while driving. We’ve experienced many of these systems on vehicles today and found some to be inaccurate or intrusive. Could the EX90 break through and offer truly helpful tech? It’s possible, as Volvo says the feature is different than any tech it has offered to date. Advanced autonomous driving capability is expected later in the EX90’s lifecycle.

The EX90 features Volvo’s largest touchscreen to date. All models include a 14.5-inch infotainment display with integrated Google Maps and Google Assistant. Wireless Apple CarPlay and Android Auto are standard. Volvo also allows owners to use their phones as a key, and the Volvo app means you can control vehicle locking and climate control functions from your smartphone. On the audio front, the EX90 is the first Volvo with Dolby Atmos sound via a 25-speaker Bowers & Wilkins setup (including speakers in the headrests). Google’s HD maps should improve Volvo’s Pilot Assist semi-autonomous driving, too.

Considering the 2023 Volvo XC90 Recharge plug-in hybrid already carries an MSRP of more than $70,000, the EX90 won’t come cheap. Volvo claims the EX90 will be available well-equipped in a seven-seat configuration at less than $80,000, so we won’t be surprised if loaded launch edition cars exceed the six-figure mark. We expect a couple EX90 models to fill a lineup, potentially with smaller batteries or less power than the 496-hp range-topper. If the Volvo XC40 and C40 Recharge electric SUVs are any indication, the EX90 will be very quick.

January 12, 2023
© AutoSportMotor
We use cookies to personalise content and ads, to provide social media features and to analyse our traffic. By clicking “Accept”, you consent to the use of the cookies. Learn More!
Accept
Manage consent