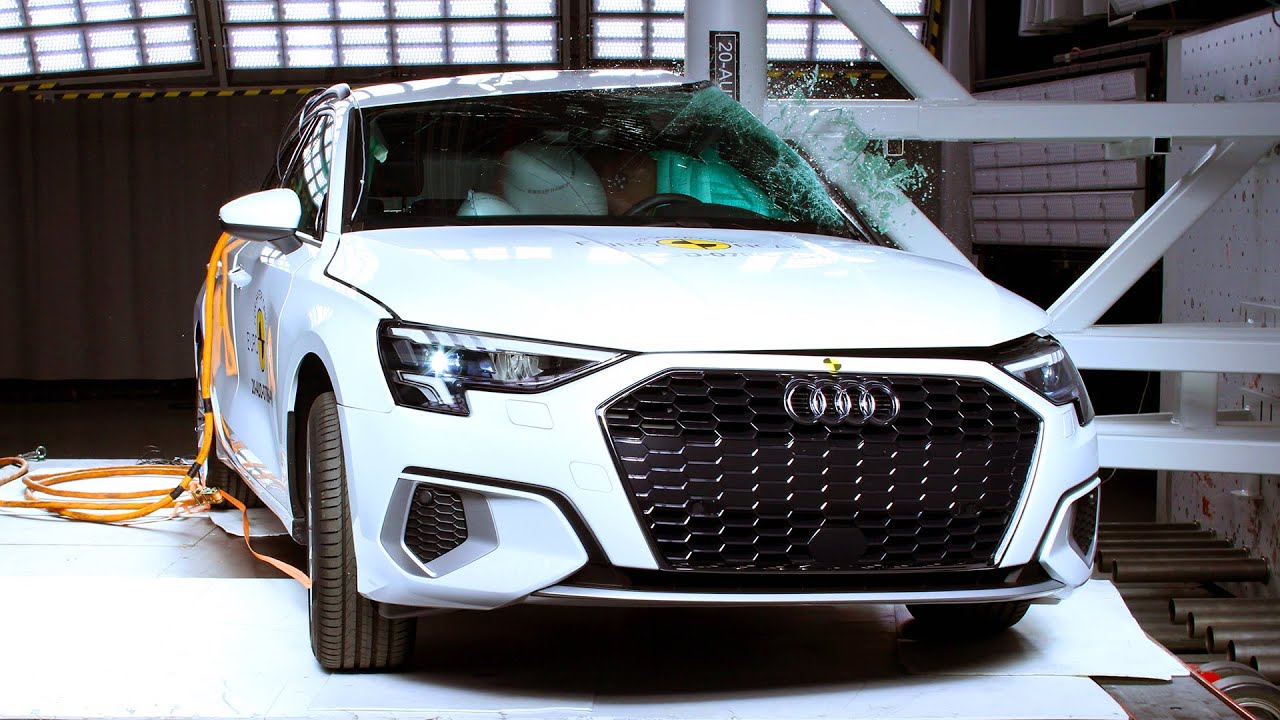 ADULT OCCUPANT
The passenger compartment remained stable in the offset frontal test. Protection of the driver’s chest was rated as marginal, based on dummy measurements of compression. Dummy measurements indicated good protection of the knees and femurs of both the driver and passenger. Audi showed that a similar level of protection would be provided to occupants of different sizes and to those sitting in different positions. Analysis of the barrier into which the A3 crashed showed some localised areas of high deformation, and its score was penalised for the risk it presented to the opposing vehicle. In the full-width, rigid wall test, protection was good or adequate for all critical body regions for both the driver and the rear seat passenger. In the side barrier test, representing a collision by another vehicle, protection of all critical body areas was good. Similarly, in the more severe side pole impact, protection was good all-round. In an assessment of protection in far-side impact, dummy excursion (its movement towards the other side of the vehicle) was rated as adequate. From VIN number WAUZZZGYMA058053, the A3 is equipped with a centre airbag to protect against occupant-to-occupant interaction in side impacts. This system worked well in Euro NCAP’s test, with good protection of the head for both front seat occupants. Cars before this VIN do not have the centre airbag and the rating shown here does not apply. Tests on the front seats and head restraints demonstrated good protection against whiplash injury in the event of a rear-end collision. A geometric assessment of the rear seats also indicated good whiplash protection. The A3 is equipped as standard with a multi-collision braking system, which applies the brakes immediately after an impact to prevent the vehicle from being involved in secondary impacts. The car also has an advanced e-Call system which, in the event of an accident, automatically sends a message to the emergency services, giving the car’s location.

CHILD OCCUPANT
In the frontal offset test, protection of the neck and chest of the 10-year dummy was rated as marginal, based on readings of neck tension and chest deceleration. In the side barrier test, protection of all critical body regions was good and the A3 scored maximum points for this part of the assessment. The front passenger airbag can be disabled to allow a rearward-facing child restraint to be used in that seating position. Clear information is provided to the driver regarding the status of the airbag and the system was rewarded. All of the restraints for which the A3 is designed could be properly installed and accommodated.

VULNERABLE ROAD USERS
The bonnet surface provided predominantly good or adequate protection to the head of a struck pedestrian, with weak and poor results recorded elsewhere. The bumper provided good protection to pedestrians’ legs and protection of the pelvis was good at most test positions. The A3’s autonomous emergency braking (AEB) system can detect vulnerable road users like pedestrians and cyclists, as well as other vehicles. In tests, the system’s response to such road users was adequate, with collisions avoided or mitigated in most cases. The system does not detect pedestrians to the rear of the car, and reversing tests were not performed.

SAFETY ASSIST
Autonomous emergency braking (AEB) is fitted as standard. The system performed well in tests of its detection and reaction to other vehicles, with impacts being avoided or mitigated in most cases. As well as a seatbelt reminder for front and rear seats, the A3 has a driver monitoring system which uses steering inputs to identify whether the driver is alert and focussed on the driving task or is impaired through fatigue or other factors. The system warns the driver if impaired driving is detected. The lane support system gently corrects the steering of the car if it is drifting out of lane and also intervenes much more aggressively in some critical situations. A driver-set speed limiter is fitted as standard and is the speed assistance system rated here. A more advanced system is available as an option which identifies local speed limits and can be set to automatically limit the vehicle’s speed accordingly.