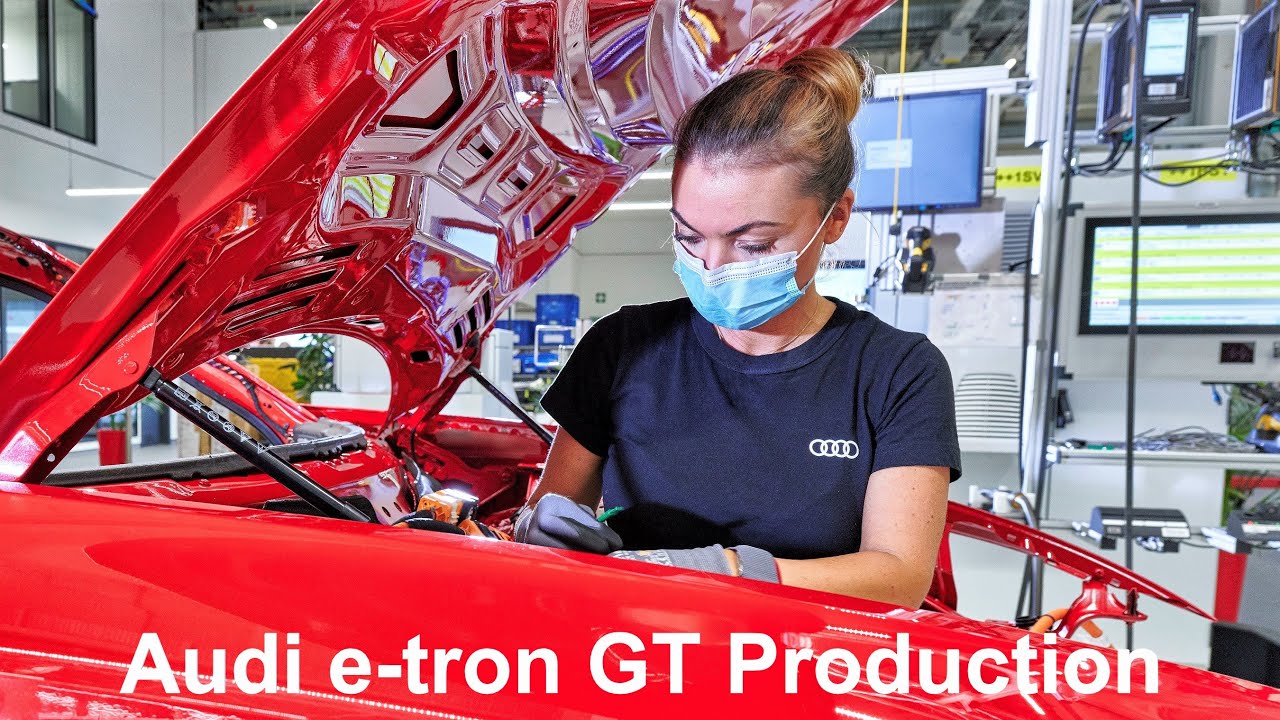 The Audi Böllinger Höfe facility in Heilbronn forms part of the Neckarsulm site. Designed from the outset as a small-series production facility with innovative and flexible processes, production of the Audi R8 commenced there in the fall of 2014. To integrate the e-tron GT, production operations were not only expanded but also upgraded and converted: Ultra-modern systems were installed in the body shop and assembly areas. In addition, new logistics halls were constructed with approximately 10,000 square meters (107,639.1 sq ft) of space on the ground floor as well as a further 800 square meters (8,611.1 sq ft) in the basement. Most of the conversions at Böllinger Höfe were completed while the site was in operation.The first all-electric Audi car to be produced in Germany will roll off an assembly line shared with the R8 from the end of 2020. However, the upstream body shops will be kept separate.

Once production of the e-tron GT starts, the energy supplied to Böllinger Höfe will come 100 percent from renewable sources, with biogas providing a climate-neutral heat supply. Since the start of the year, the site has been using exclusively eco-electricity for its automobile production operations, and this applies equally to the Neckarsulm plant and Böllinger Höfe.

Large areas of the passenger compartment of the all-electric Gran Turismo are constructed from ultra-high-strength steel, and the outer skin is made entirely of aluminum. This material concept differs fundamentally from the Audi Space Frame (ASF) of the R8 high-performance sports car and its motorsports derivatives, which are almost entirely built by hand. Therefore, a new body shop for the Audi e-tron GT was set up on the existing floorspace.

The two-way framer, a large clamping and attachment system, acts as a central station in the body assembly line. During the first pass, this is where the inner side panels are precisely positioned and joined. The outer side panels are attached during the second pass. The framer integrates ten robots, which use 32 high-tech tools to perform all joining techniques. Between the two passes and during the work steps, they switch between tools automatically.

Another new addition to the Audi Group is the station at which correlation-free measuring is performed – it represents an evolution of the previous inline measuring procedure. At the end of the two passes, two robot-guided optical measuring heads check the exact dimensional accuracy of the body. They do so by approaching 150 measuring points during the first pass and even 200 during the second. Ten room cameras calibrated to one another detect the exact position of the measuring heads; this comparison reduces the possible deviation from +/-0.30 millimeters to +/-0.20 millimeters. The volumes of ultra-precise data generated in the process make it possible to react quickly and predictively to even the smallest deviations.

In addition to high-tech systems, the body assembly line includes two manual stations. Here, welded connections are created with levels of precision and quality that call for specialist skills. The employees here profit from their expertise gained through many years working with the ASF for the Audi R8.

Following the largely automated body assembly line, the body enters what is called the mounting stage, where trained body manufacturers mount the fenders, the doors, and the engine hood. Group spokesman Marc Rickert focuses on the precise, uniform gap dimensions and the quality of the surfaces. On the outer skin parts, even minute tolerances in the dies or slight carelessness during transport and handling can cause tiny minute imperfections – this demands the greatest care and attention.

After completing the mounting stage, the bodies enter the finishing area, where they undergo yet another meticulous investigation by production and quality assurance specialists. Christoph Steinbauer knows the particularly challenging areas, such as the transitions between the doors and the adjacent surfaces.

After being painted at the Neckarsulm plant, the bodies of the e-tron GT are briefly stored alongside those of the R8 in a high bay in the basement of Böllinger Höfe. Driverless transport vehicles bring them to the joint assembly line on the ground floor. They orient themselves automatically with the help of a navigation map that contains a digital representation of the surroundings. Two laser scanners at the front and rear detect the surroundings – ensuring that each driverless transport vehicle knows its exact position at all times. The 20 vehicles that together complete the distance of around 23 kilometers (14.3 mi) on each working day are used not only for transportation but also for assembly purposes during the cycles. Every driverless transport vehicle can carry both body types, and it adjusts its height to enable ergonomic working.