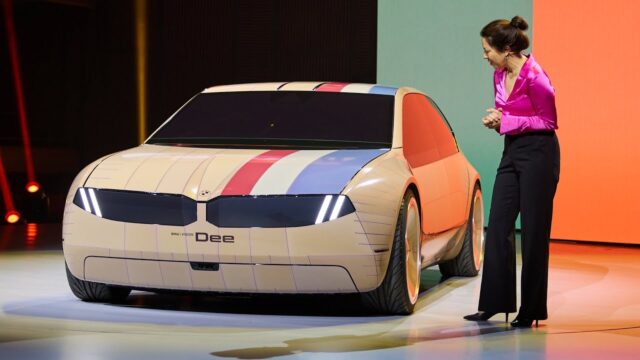 BMW i Vision Dee – The futuristic mid-size sedan. The mystery surrounding “Dee” has finally been uncovered as BMW has introduced the Digital Emotional Experience in Las Vegas at the 2023 CES. It takes the “less is more” approach in terms of design and serves as a preview of next-gen electric vehicles due in 2025. A window into the Neue Klasse platform, the concept portrays a midsize sedan featuring a “pared-down design language” we’ll likely see three years from now on an i3 saloon.

The three-box sedan adopts a fresh and futuristic take on traditional cues like the kidney grille, twin headlights, and Hofmeister kink. The front-end styling is reminiscent of the i Vision Circular, a concept unveiled in September 2021 and pictured alongside the i Vision Dee in one of the adjacent press images. Short overhangs highlight the packaging benefits of a dedicated electric car platform, maximizing the wheelbase for a more spacious cabin.

The conceptual EV has a clean side profile with no door handles or mirror caps along with minimalist wheels painted in yellow to go along with the body accents. The back of the i Vision Dee is also quite peculiar as the basic taillights are mounted up high while the bumper takes up a good chunk of the rear. Even the BMW roundels have been simplified as they’re nothing more than white stickers.

According to the Munich-based marque, the headlights and grille blend to create a “phygital icon” by combining physical with digital on a uniform surface that can change its look courtesy of E Ink tech. To show that it has a human side, Dee can express moods and facial expressions and even talk to people. As part of the welcome scenario, an image of the driver’s avatar can be projected onto the side windows.

Stepping inside, conventional buttons and switches have been eliminated and there’s no sign of the iDrive controller either. Instead, there’s a strangely named BMW Mixed Reality Slider with touch-sensitive sensors on the instrument panel. These control the massive head-up display that spans the entire width of the windscreen. Five selectable modes allow the driver to choose how much content they want on the HUD.

The steering wheel is just as unconventional as the rest of the car. It has a vertical spoke and touchpoints (again, BMW calls them “phygital”) to control the content projected onto the windscreen by the vast HUD. Those windows we mentioned earlier are dimmable to “gradually fade out reality” and make the concept’s interior feel more immersive.

BMW says the advanced head-up display will be implemented on a production model in 2025 with the first EV based on the Neue Klasse architecture. As a refresher, the Bavarians will inaugurate NE with two models in the midsize segment, so expect a 3 Series Sedan and an iX3. They’ll boast newly developed round battery cells with 20 percent higher energy density, 30 percent increased range, and 30 percent quicker charging.

Additional details about the i Vision Dee will be released later this year when BMW will hopefully provide some actual technical specifications. In the meantime, we do know the M division is already working on a high-performance EV with quad motors, and the Neue Klasse architecture is being engineered to (eventually) accommodate solid-state batteries.

The first NE-based cars will be built at the new Debrecent plant in Hungary from 2025, with Munich to follow a year later. By the end of the decade, the factory in Spartanburg, South Carolina will assemble at least six electric SUVs on the new underpinnings.

BMW’s head of Efficient Dynamics, Thomas Albrecht, said last year EVs won’t go farther than 1,000 kilometers (621 miles) since that would be overkill. Chief Technology Officer Frank Weber has promised owners will gain 30 miles (48 kilometers) of range for every minute spent recharging the battery pack. The latter will be about 20 percent lighter than the current crop of prismatic cells and BMW is expecting to halve battery-related production costs and slash CO2 emissions by 60 percent during the manufacturing process.