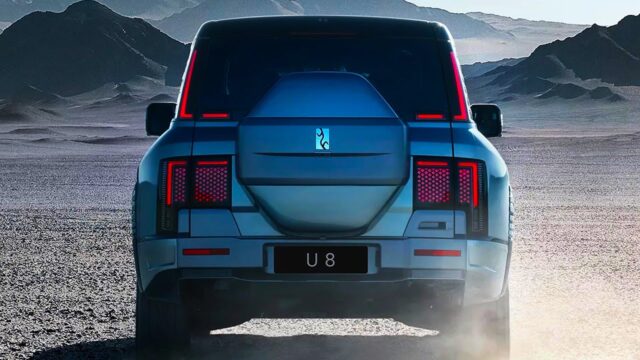 BYD YangWang U8 – Hardcore Off-road SUV With 1,100 Hp & Amazing Features. Whenever an electric vehicle with off-road ambitions arrives, people often ask if it can perform tank turns. Rivian promised that with the R1T, but the production version did not offer that. BYD may become the first company to sell a vehicle with a tank turn, even if it will not bear its badge. You’ll know it as Yangwang U8.

The electric off-roader will try to beat the Mercedes-Benz G-Class with more than similar looks. It will also cost half of what the German competitor costs in China, even if that will still make it the most expensive passenger vehicle BYD ever made. Another plus is its innovative features, most of them based on a technology called e4.

The Chinese manufacturer stated that it is the first one developed in the country to present four independent motors, one per wheel. In images disclosed by BYD, we can see a frame with electric components, which does not make much sense for the U9, a supercar Yangwang presented with the U8. That shows the e4 is essentially about the four electric motors, not the underpinnings.

That is more than enough. BYD managed to give the U8 tank turns even in very challenging conditions: on asphalt and any other surface that allows a strong grip. All other tank turns were performed on typical off-road terrains. Choosing tarmac was probably the best way for BYD (Yangwang, my bad) to demonstrate its electric motors can cope with that. The company only needs to go from promises to production lines, but it was very emphatic about the maneuver not to use it. The U8 made a tank turn on stage!

That was not the only surprising trick the e4 was able to perform. On Weibo, Yangwang also shared the U8 climbing a dune at 32º, floating and navigating to demonstrate IP68-rated protection to its core systems, and accelerating on ice without spinning out of control.

BYD states that the ability to adjust the torque 1,000 times per second ensures the vehicle will still be controllable even if one tire blows out at high speed. An engineer reached 120 kph (75 mph) before the right front tire was artificially deflated, and the U8 kept driving as if nothing had happened. The video is pretty impressive.

BYD said Yangwang would have its own sales network but did not disclose when the U8 and the U9 will be put for sale. Although the U9 can accelerate from 0 to 100 kph in less than 3 seconds (the U8 does that in less than 4 s), the only element that shows both vehicles belong to the same brand is the Yangwang badge. The U8 should cost RMB1 million ($145,307 at the current exchange rate). The Mercedes-Benz G-Class costs RMB1.89 million ($274,630) in China.

January 5, 2023
© AutoSportMotor
We use cookies to personalise content and ads, to provide social media features and to analyse our traffic. By clicking “Accept”, you consent to the use of the cookies. Learn More!
Accept
Manage consent