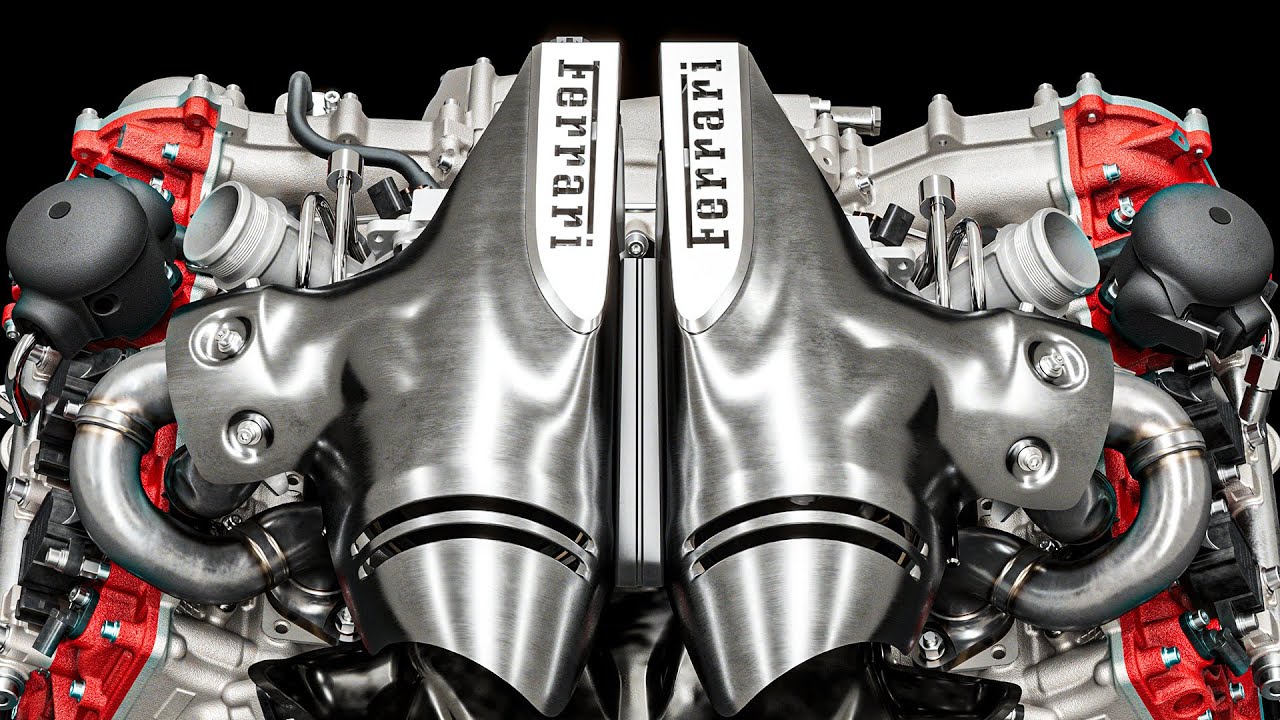 Ferrari Engine Close Up | Ferrari 296 GTB V6 Engine. The 296 GTB is the first Ferrari road car to sport a V6 turbo engine with a vee with an angle of 120° between the cylinder banks, coupled with a plug-in electric motor.

As the V6 turbo is integrated with an electric motor at the rear, the 296 GTB’s combined maximum power output is 830 horsepower, putting it at the top of the rear-wheel-drive sports car segment as well as making it extremely flexible.

Thanks to its 663 cv and 221 cv/l, the 296 GTB’s ICE sets the new specific power output record for a production road car. Central to achieving this result was the introduction of the 120° vee configuration with equally-spaced firings as well as the positioning of the turbos inside the vee which produces a much more compact engine and optimally distributed masses.

To obtain this specific power output, the pressure in the combustion chamber had to be pushed to new heights. Boosting the pressure in the chamber demanded exceptional development from both a thermal-fluid-dynamic and structural point of view without compromising on engine weight and reliability. To that end, Ferrari poured all of its significant expertise in alloys, dimensioning and components into engineering the aluminium engine block and cylinder heads. Both components are new and specific to the new V6 architecture.

The distribution is completely new: drive is transmitted to the pump assembly (water and oil) via a timing chain and to the valvetrain via an offset sprocket and a dedicated timing chain per cylinder bank. The main chain has a dedicated hydraulic tensioner, two bush chains with relative hydraulic tensioner and different calibrations for right and left bank, as well as a dedicated chain for the oil pump assembly. The valvetrain, which has roller fingers with hydraulic tappets, has specific intake and exhaust valve profiles.

The engine benefited from the latest Ferrari combustion chamber development introduced on the SF90 Stradale: central injector and spark plug with 350-bar pressure injection system that improves the fuel-air mix in the chamber, performance and reduces emissions. The intake and exhaust ducts were redesigned and tuned to maximise volumetric efficiency and thus guarantee high levels of turbulence in the chamber.

The IHI turbochargers have been completely redesigned using higher performance alloys. This meant the maximum revs of the turbos could be increased to 180,000 rpm, with a consequent improvement in performance and boost efficiency, which increases by 24%. The symmetrical, couter-rotating turbos are of the mono-scroll type: the technical solutions adopted have reduced the compressor wheel diameter by 5% and the turbo rotor 11% compared to the V8 applications, despite the very high specific power. The reduction in the rotating masses (the inertia of the two rotating elements has been reduced by 11% compared to the 3.9l V8 solution) has reduced the spool up time ensuring instantaneous power delivery.

The crankshaft is made from nitrided steel. To ensure it has a 120° crank angle, after the initial forging of the rough ingot, the crankshaft is twisted and then subject to a deep nitriding heat treatments (to guarantee resistance to high loads), machining and balancing. The firing order of the new V6 (1-6-3-4-2-5) is the result of the crankshaft’s journal geometry.  100% of the rotating masses and 25% of the alternating masses are balanced, and therefore its level of balance allows loads on the bushings to be reduced without increasing the weight of the engine.

The shrill sound of the engine is instantly recognisable. The first in the F163 engine family, this V6 earned itself the nickname “piccolo V12” (little V12) during the development phase. The 120° V architecture guarantees a symmetrical firing order while the equal-length, tuned exhaust manifolds combined with the single exhaust line outside the hot-V amplify the pressure waves. These characteristics are what lend such purity to the orders of harmonics, which are further helped by a limiter that hits an impressive 8500 rpm. The patented “hot tube” has been completely redesigned for the 296 GTB and is positioned prior to the exhaust gas treatment systems so that it channels the pure sound into the cabin, further enhancing driver involvement and excitement.