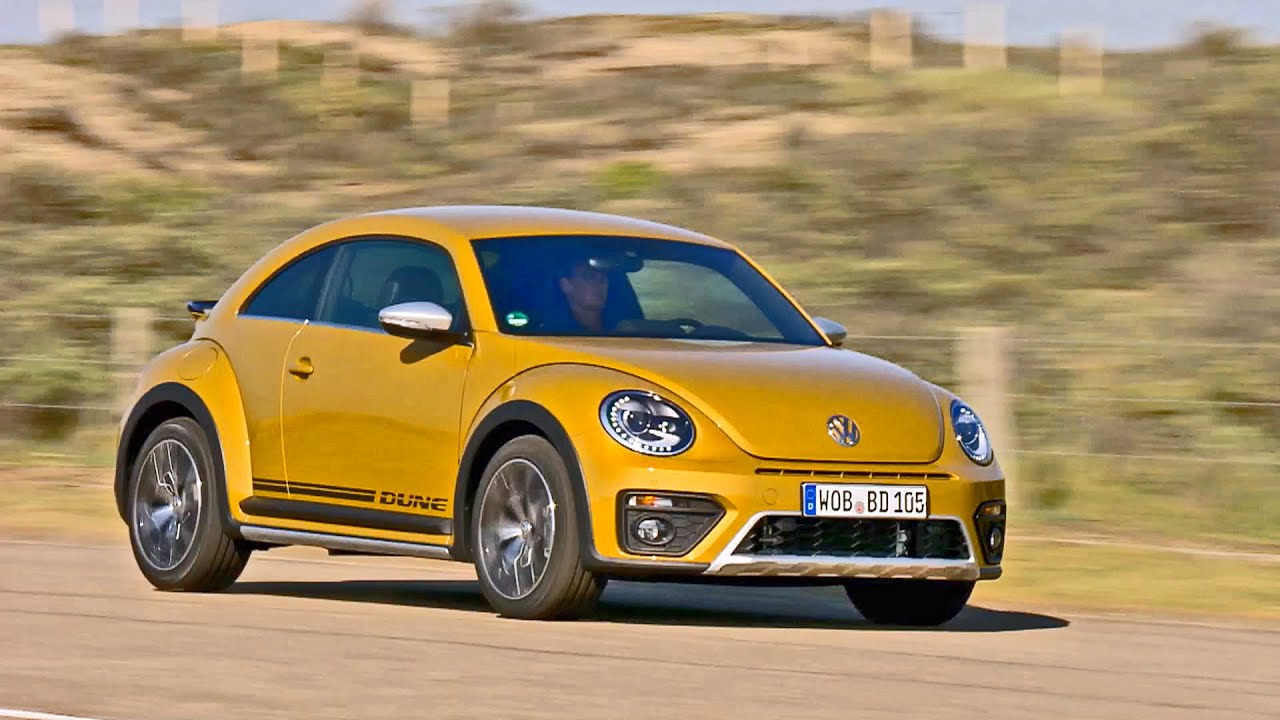 FIRST DRIVE: 2016 VW Beetle Dune – Coupe and Convertible. Many who choose a Beetle Dune, anywhere from the 105 HP (77 kW) to the 220 HP (162 kW) model, will acknowledge that it is more than simply a car – it is an attitude to life sealed by a signature on the purchase agreement. It is the freedom to stand out from the mainstream through individual mobility, especially if the “Dune” is ordered in the exclusively developed colour: “Sandstorm Yellow Metallic”. The Beetle became a globetrotter long ago; engineered and designed in Germany; built and adored in Mexico; loved in Asia, Europe and, as ever, in the USA, where not only the “dune buggy”, and thus the second part of the Beetle Dune’s name, was coined, but the first, too: “Beetle”. It was The New York Times that first ever dubbed the Volkswagen as a “shiny little beetle” in a story it ran on 3 June 1938.

The Beetle Dune is its own independent line within the model series. It is possible to recognise the crossover model in fractions of a second by its increased ground clearance (with off-road suspension), a wider track, black wheel arch and sill extensions, 18-inch “Canyon” alloy wheels, distinctive bumpers with diffusers at the front and rear end, stylised side sills and, of course, the “Dune” signature on the side profile. A crossover for the modern era: front-wheel drive and efficient; as robust as the dune buggy once was, and refined like a Hebmüller or a Karmann.

Various features in particular stand out inside the Beetle Dune: from the dashpad painted in the standard “Sandstorm Yellow Metallic” with door shoulders (gloss “Black” in conjunction with the exterior colour “Dark Bronze Metallic”) to the dial surrounds of the main and auxiliary instruments, which are also finished in “Sandstorm”. Meanwhile, the contrasting stitching on the seats (including the central armrest), the leather-trimmed steering wheel (with the “Dune” logo), the hand brake lever grip and gear lever knob in matching “Curry”, and the decorative stitching of the cloth floor mats also catch the eye. Both of these colours, “Sandstorm” and “Curry”, stand out particularly well because all of the other major elements in the cabin are either in black or aluminium. The black interior features include the seat system (with “Global” middle seat panels), door trim panels, roof pillars and headliner.