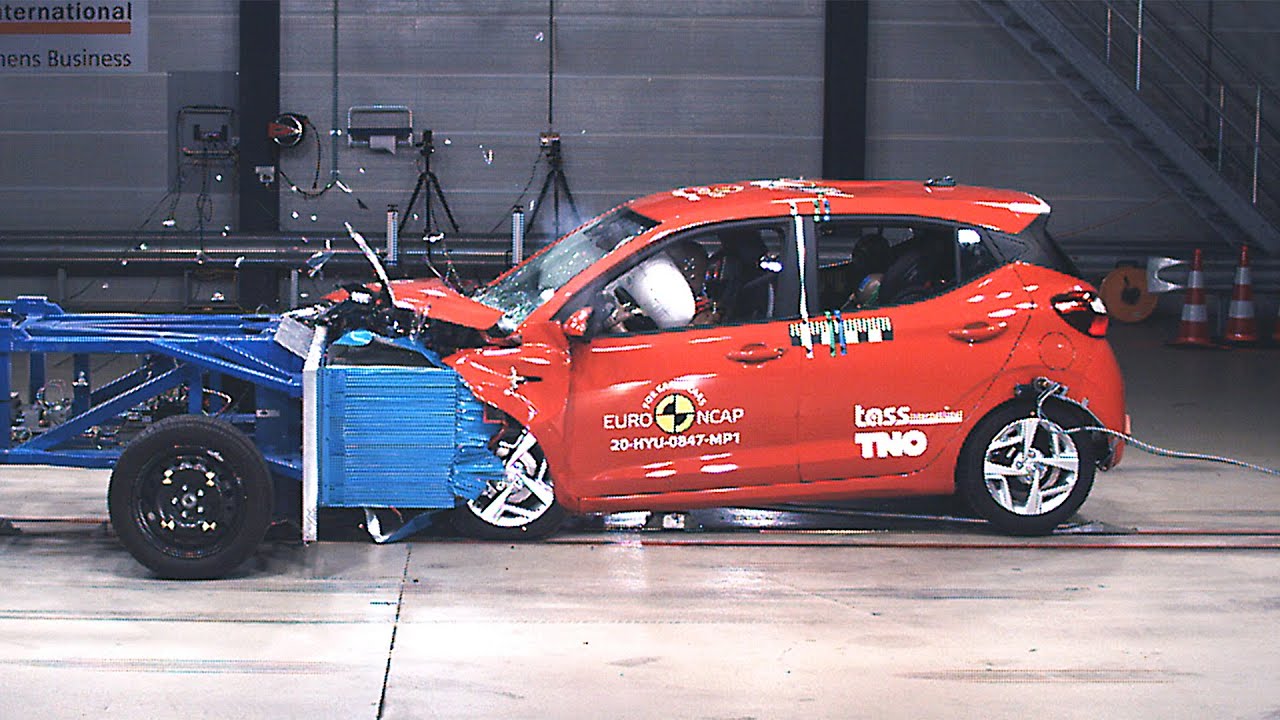 In the full-width frontal impact, the driver’s pelvis slipped under the lap belt, a phenomenon known as ‘submarining’.

Adult Occupant_
The passenger compartment remained stable in the offset frontal test. Protection of the driver’s chest was rated as weak, based on dummy measurements of compression. Dummy readings of the knees and femurs were good but some structures in the dashboard were thought to pose a risk of injury so the score was penalised. The i10’s low weight and benign front structure did not pose a high risk to the occupants of a colliding vehicle in a frontal offset impact. In the full-width, rigid wall test, protection was good or adequate for all body critical body regions except for the driver’s abdomen. The abdomen slid under the lap section of the seatbelt (a phenomenon known as ‘submarining’) and protection of that body region was rated as poor. In the side barrier test, representing a collision by another vehicle, protection of all critical body areas was good. Similarly, in the more severe side pole impact, protection was good all-round. In an assessment of protection in far-side impact, dummy excursion (its movement towards the other side of the vehicle) was rated as poor. The i10 is not equipped with centre airbags to protect against occupant-to-occupant interaction in side impacts. Tests on the front seats and head restraints demonstrated good protection against whiplash injury in the event of a rear-end collision. A geometric assessment of the rear seats indicated marginal whiplash protection. The i10 is equipped with an advanced e-Call system which, in the event of an accident, automatically sends a message to the emergency services, giving the car’s location.

Child Occupant_
In the frontal offset test, protection of both child dummies was good or adequate for all critical parts of the body except the neck of the 10 year dummy, protection of which was rated as marginal, based on measurements of neck tension. In the side barrier test, protection of the chest of the 10-year dummy was poor and that of the head was marginal, based on high accelerations. The front passenger airbag can be disabled to allow a rearward-facing child restraint to be used in that seating position. Clear information is provided to the driver regarding the status of the airbag and the system was rewarded. With the exception of one universal child restraint in the rear centre seat, all of the restraints for which the i10 is designed could be properly installed and accommodated.