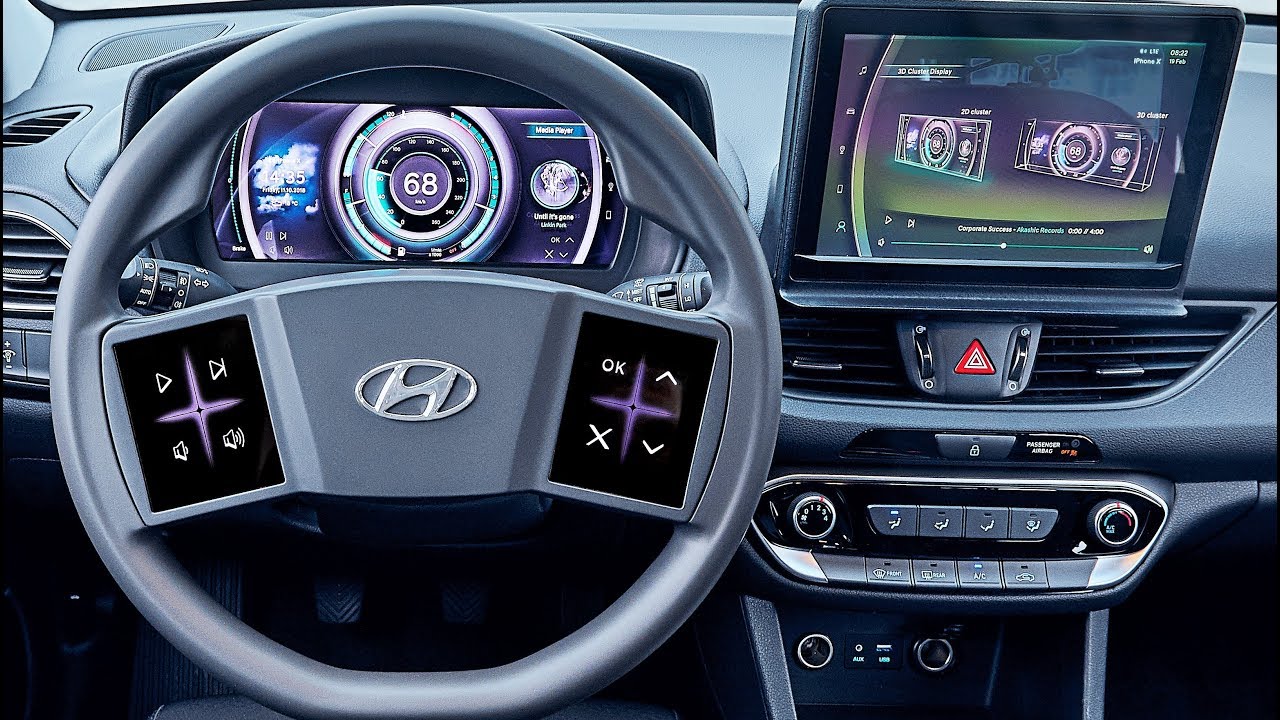 Since 2015, there have been four significant project phases in the development of cockpits at Hyundai. An evaluation of Hyundai’s steering wheels and cockpits, as well as those of competitor cars, showed a broad variety and a substantial number of buttons. It became Hyundai’s target to reduce this number and to create a clean interface. The brand therefore opted to replace the rocker switches with two touch panels to make its steering wheels more intuitive.

In a project phase in 2016, Hyundai went a step further by replacing all hard keys with touchpads. This new development led to increased clarity and flexibility. The 2017 development phase even brought flexibility to a new level by making the cockpit easily customisable for users. Hyundai then replaced the touchpads of the 2016 model with two displays.

In 2018, Hyundai focused on improving the existing concept of touch displays with haptic feedback on the steering wheel. Hyundai consequently used the steering wheel of the i30 model. “We chose the i30 to demonstrate that innovations are not limited to higher-segment vehicles,” Regina Kaiser explains. “Hyundai intends to prove that innovations need to be achievable for a broad customer base.”

The steering wheel is equipped with two displays which have been increased in size and ergonomically adjusted. In order to respond ideally to the needs of each driver, the buttons can be adapted to the individual wishes of the operator. The displays come with a new, freely configurable icon design for easier understanding and two actuator modules underneath the surface allowing for a stronger and more consistent haptic feedback which optimises the usability for the driver. Hyundai even advanced the centre display with the newly-developed haptic modules and implemented the interaction between the steering wheel, centre and multi-layer cluster display.

In the latest development stage, the instrument cluster display was changed to a multi-layer display (MLD®). It allows a new, very natural way of attention control. In contrast to conventional displays, which can only display their contents on one level, the MLD® consists of two displays, which are stacked behind each other at a distance of 6mm. The distance between the two displays allows visual 3D effects: one part of the graphic is shown on the front display and the other part on the rear display. In the area where the graphics overlap, the impression of an object in space is created. This effect is used to guide the user’s attention with less distraction. The information most relevant for the present situation, for example the speed limit, is shown in the front display to catch the driver’s eye.

The pieces of information indicated on the steering wheel displays change depending on the current instrument cluster menu level and also depending on the driving situation. Furthermore, the customer can change the layout and the displayed “shortcuts” for entering specific applications tailored to his or her individual needs. The driver can customise the settings with up to five buttons per display, adjusted to preferences and frequency of usage, much like the layout of a smartphone. Customisable cockpit settings are becoming increasingly important as they offer drivers maximum freedom and strongly improve the user experience, making it more intuitive and comfortable.

In the latest development steps, the 2018 steering wheel has been integrated into a real car. Recently, Hyundai conducted a driver distraction study with the Würzburg Institute for Traffic Science (WIVW) to evaluate the usability of the latest innovations while driving. “We are doing research on the learnability, intuition and potential driver distraction of the virtual cockpit,” says Regina Kaiser. For all use cases, the results of the study clearly show that Hyundai’s new cockpit is significantly below the limits of the globally acknowledged motor vehicle safety associations AAM and NHTSA. Even for the more complex use cases, all test persons indicated only a slight distraction, which was perceived by them as noticeable but not as strenuous or interfering with the driving task. Furthermore, the participants of the study extolled the attractive design, the visual and haptic feedback and the reduced and intuitive structure of the prototype.

Freely configurable steering wheel displays enhance flexibility and are easily adapted to fit several vehicle models and segments. At this point, Hyundai is still in the early prototype phase of the new virtual cockpit. However, this is an important milestone and the virtual cockpit offers a platform for exciting new features as the technology continues to evolve. The end of the road has not been reached yet. Hyundai will use the results of the current clinic and integrate them into its future development plans.