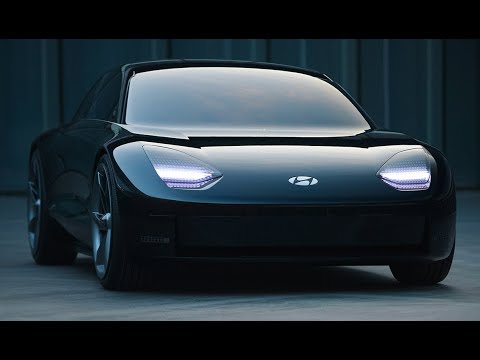 Hyundai Prophecy Concept EV – Interior, Exterior and Drive. Hyundai unveiled the Prophecy electric concept car. Built atop a platform dedicated to electric vehicles, the Prophecy’s on-the-nose name all but tells us that Hyundai will be looking to incorporate some of these design elements in its future cars. It’s a wild departure from last year’s concept EV, the 45, which leaned more heavily on vintage rectilinear looks.

Curves are the name of the game with the Prophecy. Every square inch of the car is curvy and sleek, with the light creating interesting shapes no matter where it lands on the car’s body. Because there’s no engine to worry about, there’s barely any front overhang. The rear end is significantly wilder than the front, with a strange clear spoiler and a whole lot of interesting textures just below it. The transparent look of the spoiler is found elsewhere on the car, meant to show off the components at work that would ordinarily be hidden.

My absolute favorite part of the car is its “pixelated” headlight design. It looks plucked straight out of a science-fiction novel, and best of all, Hyundai has committed to using this specific design element in its future cars.

If you thought the exterior was wild, just wait. In addition to hosting some boss plaid fabric, the Hyundai Prophecy’s interior is all about maximizing space, starting with the suicide doors that offer up dead-simple ingress and egress. Joysticks replace the steering wheel, and screens wrap around the upper part of the dashboard.

Other than being electric, we don’t know anything about the Prophecy’s powertrain. But that’s fine, because the mechanicals aren’t the point: This design study exists to give us an idea of how Hyundai will design future EVs. And by the looks of it, the future’s going to be a weird and cool place.