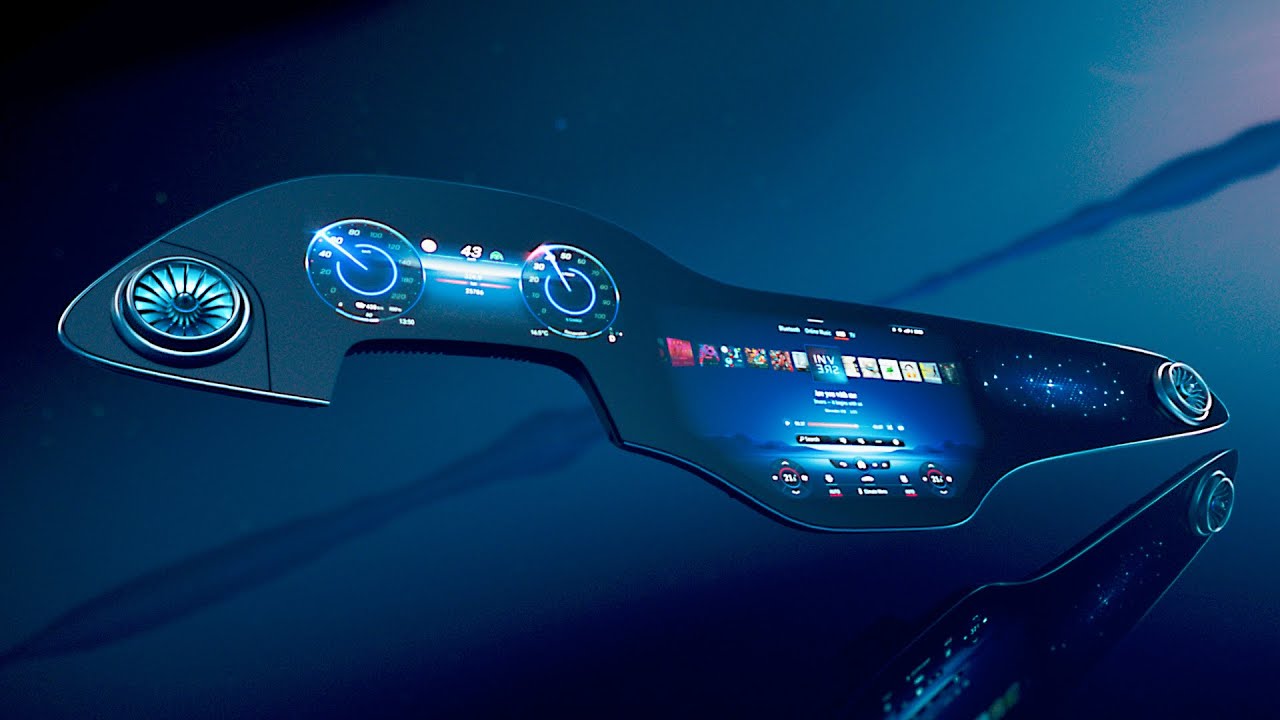 Mercedes-Benz MBUX Hyperscreen – The World’s Most Advanced Infotainment System. MBUX (Mercedes-Benz User Experience) has radically simplified the operation of Mercedes-Benz vehicles. It was first unveiled in 2018 in the A-Class, and there are now more than 1.8 million Mercedes-Benz passenger cars on the road equipped with MBUX worldwide. You can also find MBUX in the Van division. A few months ago, the second generation of this learn-capable system debuted in the new S-Class, and Mercedes is now taking another big step forward in the form of the new EQS and the optionally available MBUX Hyperscreen.

The MBUX Hyperscreen is an example of digital/analogue design fusion: several displays appear to blend seamlessly, resulting in an impressive, curved screen band, while analogue air vents are integrated into this large digital surface to connect the digital and physical world.

The MBUX Hyperscreen is surrounded by a continuous plastic front frame. This visible part is painted in “Silver Shadow” that undergoes an extensive three-coating process to achieve a high-quality surface impression through extremely thin intermediate coats. The integrated ambient lighting installed in the lower part of the MBUX Hyperscreen makes the display unit appear to float on the instrument panel.

The front passenger is also given their own display and operating area, to help make road trips more enjoyable and entertaining. The passenger display allows for individualized content with up to seven profiles. However, the entertainment functions of the passenger’s display are only available during the journey within the framework of the country-specific legal regulations. If the passenger seat is not occupied the screen becomes a digital decorative part. In this case, animated stars i.e. the Mercedes-Benz pattern, are displayed.

For a particularly brilliant image, OLED technology is used for the central and front passenger displays, providing an especially brilliant image. This technology features individual image pixels that are self-luminous; image pixels, when they are not used it remains switched off, which means that they appear deep black. The active OLED pixels radiate with a high color brilliance, resulting in high contrast values, regardless of the angle of view and light conditions.

This electrifying display appearance goes hand in hand with emotionally appealing visualization. All of the graphics are styled in a new blue/orange color scheme throughout. The classic cockpit display with two circular instruments has been refreshed with an all-new digital look.

Thanks to its clear design, the MBUX Hyperscreen is intuitive and easy to operate. One example of this is the EV display, important functions of the electric drive such as boost or recuperation are visualized in a new way, with a spatially moving clasp, making it tangible for the user. A lens-shaped object moves between these clamps, which follows gravity and thus is able to impressively depict the G-Force.

With the MBUX Hyperscreen, several displays appear to merge seamlessly, resulting in an impressive, curved screen band over 56 inches wide. The surface area for the passengers is 377 sq. in.

The large glass cover display is curved three-dimensionally in the molding process at temperatures of approx. 1202°F. This process allows a distortion-free view of the display unit across the entire width of the vehicle, irrespective of the display cover radius.

To access the most important applications, the user scrolls through 0 menu levels. This is why Mercedes- Benz calls this the zero-layer.

There are a total of 12 actuators beneath the touchscreen for haptic feedback during operation. If the finger touches certain points there, they trigger a tangible vibration in the cover plate.

The safety measures include predetermined breaking points alongside the side outlet openings as well as five holders which can yield in a targeted manner in a crash thanks to their honeycomb structure.

8 CPU cores, 24-gigabyte RAM and 46.4 GB per second RAM memory bandwidth are some of the MBUX technical specifications.

With the measurement data of a 1 multifunction camera and also 1 light sensor the brightness of the screen is adapted to the ambient conditions.

With up to seven profiles, the display section can be individualized for multiple front passengers.