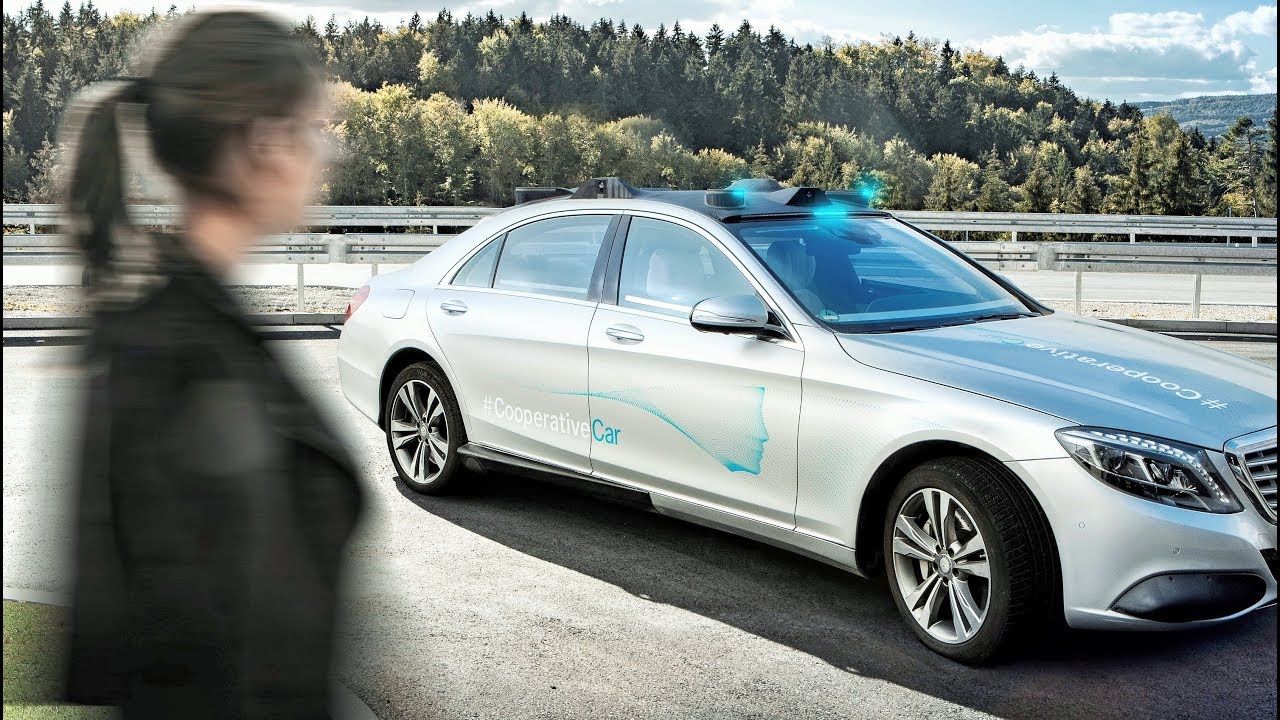 The cooperative S-Class also informs its surroundings that it is about to enter into operation while it is still at the side of the road. The light strips around the vehicle emit an appropriate light signal. The exterior mirrors fold out and first the rear of the vehicle lifts up followed by the front. These movements resemble a living thing that is waking up and stretching. People can understand this communication intuitively.

360-degree light signalling is particularly important when it comes to keeping pedestrians informed. This finding is the result of several light studies that Mercedes-Benz has conducted at its test facility in Sindelfingen, as well as at the recently opened site in Immendingen under the direction of Stefanie Faas from Daimler’s Innowerkstatt (innovation workshop). The research looked at how pedestrians react to different signaling autonomous vehicles in various traffic situations. It became clear that light signalling has a strong effect on the acceptance of autonomous driving vehicles, as well as on how safe pedestrians feel. In particular, people wish for light signalling in situations where there was before interaction with the driver. For example, people are used to seeking eye contact with a driver when they wished to cross the road. If light signalling is communicating that a vehicle is in the autonomous driving mode, pedestrians can feel safe even if the vehicle occupants are obviously not paying attention to what is happening in traffic. The majority of participants in the study preferred turquoise as the signalling colour. All participants favoured a 360-degree display. Mercedes-Benz is also contributing the results of the study on the theme of “autonomous driving” to SAE International, an international organisation dedicated to advancing mobility technology. There Mercedes-Benz recommends the use of turquoise, a colour which, up to this point, has not been used in the automotive sector to enable 360° signalling.

Going beyond the studies and the light signalling demonstrated based on the cooperative vehicle, Mercedes-Benz is already concerning itself with longer-range visions, which are intended to enable “informed trust” between humans and machines. Informed trust contrasts with blind trust and demands a certain knowledge of the object. Here the entire outer skin of the vehicle becomes a communication medium for 360-degree communication. The conventional body is transformed into a “digital exterior”.

Mercedes-Benz showed a first step in this direction back in 2015 with the F015 research vehicle. Among other features, this has a digital grille, which can be used as a communication medium. A year later the Vision Van, an electrically powered van with integral delivery drones for transporting parcels over the last mile, picked up on this motif. This is fitted with digital LED grilles at the front and rear, which the vehicle can use to warn traffic behind, for example, with messages such as “Vehicle stopping”. In 2018 the Vision URBANETIC, a mobility concept for on-demand, efficient and sustainable mobility, took this design further. The concept comprising an autonomous drive platform with interchangeable modules for transporting cargo and passengers can communicate with its surroundings by means of “digital shadowing” on the body. For example, the shadow of a pedestrian will be displayed when the vehicle’s 360-degree sensors perceive someone nearby. Due to this interaction, the pedestrian can feel confident that the vehicle has detected them and can act accordingly.