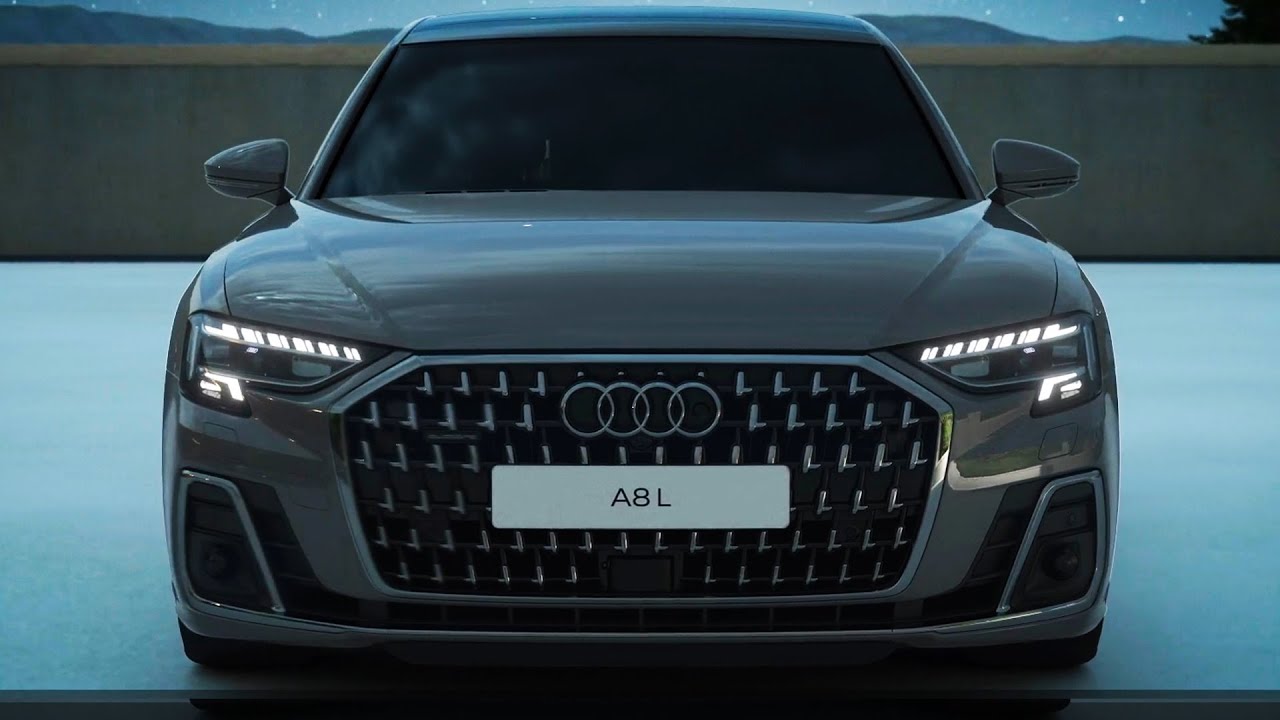 New 2022 Audi A8 – Digitalized lighting technologies. Audi’s new Digital Matrix LED headlights will revolutionise safety, greatly reduce fatigue and stress in driving at night and even be able to communicate with other drivers, according to the car maker.

However, a number of Audi’s more radical ideas – such as OLED tail-light clusters displaying warning symbols and the headlights projecting a variety of warning symbols onto the road surface – are held up by complex homologation laws across the globe.

The most striking of the various new light technologies revealed at a technical presentation last week at the company’s Ingolstadt headquarters is already an option on the new Audi A8.

The Digital Matrix Headlights (DMH) are based around a new Digital Micro Mirror device that houses 1.3 million micro-mirrors. These mirrors measure just a tenth of the width of a human hair and can be rapidly switched into two distinct positions.

Inside the headlight, the light from an LED unit is bounced off the micro-mirror array and then sent through a projector lens. Because the resulting beam pattern is effectively made up of 1.3 million individual points of light, the result is closer to the projection of an image than a simple beam of light.

The upshot is that the DMH headlights can switch between very different beam patterns depending on the road conditions. Indeed, the micro-mirrors can be reangled as many as 5000 times per second, allowing the beam pattern to be minutely adjusted at blistering speed.

On motorways, for example, the beam pattern can be concentrated centrally, exactly illuminating the lane in which the car is travelling.

On unlit country roads, the beam is much more flexible, illuminating the road ahead as well as gently bathing the verge and roadside trees in a seamless wall of light. And thanks to the very fine ‘grain’ of the headlights, the high beam can be shaped precisely around an approaching vehicle, preventing the driver from being dazzled.

Such is the versatility of the DMH technology, it can also project warning signs onto the road as part of the headlamp beam.

The new A8 projects a warning triangle with an exclamation mark inside it onto the road ahead of the driver. Using live traffic information drawn down by an internet link via ‘the cloud’, this warning symbol appears for three seconds, alerting the driver of hazards ahead such as congestion or a dangerous road surface.

Further advancing this, including projecting indicator lights onto the road surface, is greatly complicated by having to negotiate with individual countries, according to Audi lighting specialist Johannes Reim.

Even so, Audi says it can envisage more innovations using advanced lighting systems to communicate with pedestrians, cyclists and other drivers. One idea is to use lamp projections front and rear to inform cyclists of the driver’s intentions or to project a warning light that indicates the car door is about to open.

At the moment these multi-segment rear clusters allow the A8 driver to choose from four different rear light signatures (five on the new Audi S8) and they can also send out an indication of proximity to a following vehicle using data from the car’s rear parking sensors.

Future OLED clusters will jump from 10-segment to 50-segment and, eventually, many more segments. Because OLEDs offer an evenly diffused light that can be tuned precisely, Audi’s lighting designers envisage rear OLED clusters made up of many tiny segments, opening the way for symbols to be presented to following vehicles, such as multiple hazard warning triangles or animations that reflect speed of braking, for example.

However, Audi’s light specialists say that OLED light clusters are difficult to manufacturer for all weather conditions – such as extreme humidity – and must be sealed well enough to prevent to any oxygen leaking into the OLED housing.

It will take some years of combined effort between Audi and its suppliers to bring these new lights to production, even if the extremely complex issue of homologation can be overcome.
———
Hope you enjoy this video and leave your comment bellow. To stay up to date with alot of new Videos