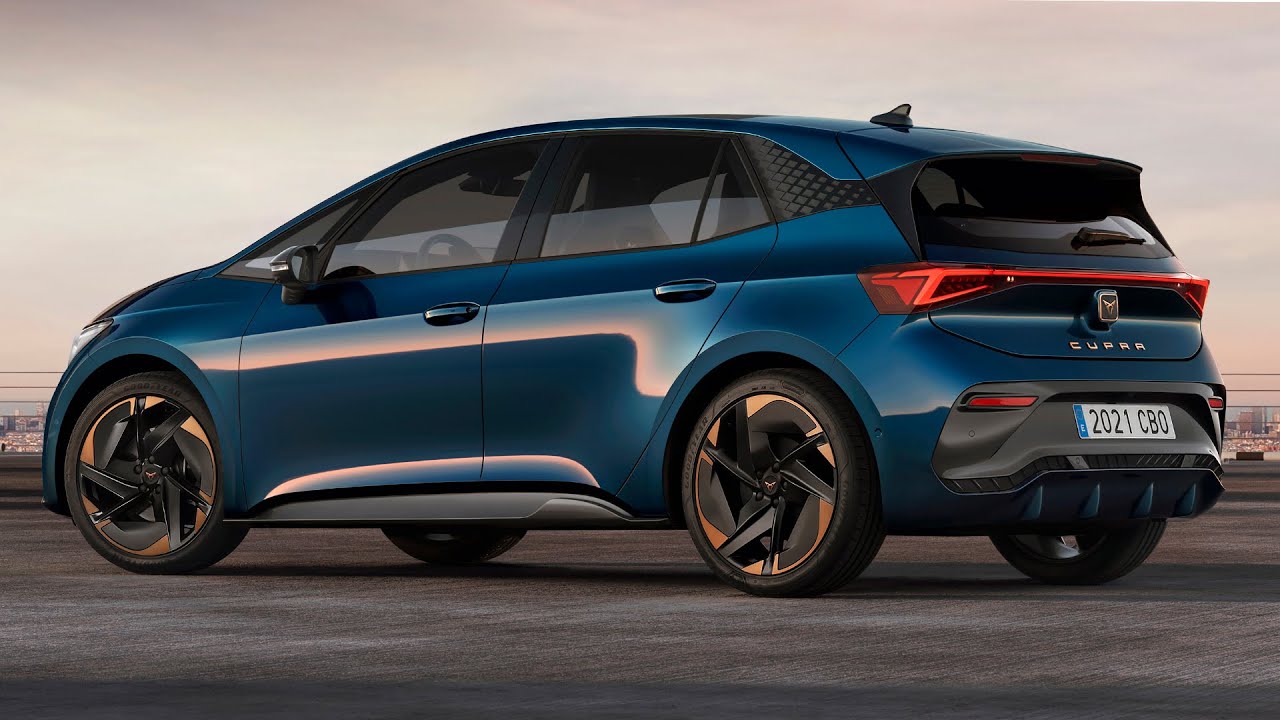 New 2022 Cupra Born – Sporty EV hatch / Features, Exterior and Interior. The evolution of Cupra from SEAT’s performance sub brand to full-on VW Group premium player has taken another step forward with the reveal of the all-electric Born. While a majority of Cupra’s current range is composed from high-performance (and high profit) variants of lesser SEAT models, its first EV has actually beaten its mainstream cousin to the punch, with company bosses making the decision to release the Born as a Cupra, and not a SEAT.

What that means for the Cupra Born is that its development took a turn away from the mainstream Volkswagen ID.3 on which it is closely based, prioritising performance and dynamism in contrast to VW’s friendlier approach. As such, the rear-engined, rear-wheel drive MEB chassis remains but Cupra’s high-spec Born models will be uniquely offered with a more powerful electric motor, building power from 200bhp to 229bhp.

When combined with the mid-sized 58kWh battery pack, the new motor gives the Cupra Born a 0-62mph time of 6.6sec, a useful 0.7sec quicker than the fastest ID.3, and only 0.4sec behind the significantly more powerful twin-motor Audi Q4 e-tron. Both smaller 45kWh and larger 77kWh battery packs will also be available, so too lesser 148bhp and 200bhp motors, but it’s Cupra’s audacity to out-do VW in the top-level variants that should prove to be the most interesting aspect of the new Born.

It’s also the first of the smaller MEB products to feature adaptive dampers and a progressive steering rack, but in an interview with R&D boss Dr Werner Tietz, the possibility of combining the smaller chassis with a dual-motor setup as seen in the new ID.4 GTX and top-spec Audi Q4 e-tron is a technical possibility, but a perceived lack of demand has kept it from being a priority for the Born specifically.

To emphasise its more dynamic stance, Cupra has also given the Born a more aggressive design, trading the ID.3’s approachable and friendly aesthetic for something with more purpose. Proportions are familiar – it’s relatively tall and still has a broad glasshouse – but there are wider wheels and tyres (up 20mm to 235 section on some models), more expressive surfacing and the typical copper highlights around the badges, wheels and interior detailing.

The two do share common door pressings, but all other body panels and lighting units are unique. Cupra has ditched the VW’s front light bar in the process and instead stuck one on the tailgate in a similar fashion to all other Cupra models (except the older Ateca). Cupra has also added a progressive steering rack and adaptive dampers to the chassis package. The Born is the first of the smaller MEB products to feature those elements.

The Born’s interior has also seen an upgrade compared to its German compatriot, with the ID.3’s stark and almost austere cabin swapped out for one with a greater emphasis on layering and higher quality materials. While not as substantially different as Audi’s new Q4 e-tron, the Born will at least utilise Cupra’s own infotainment system, which is nothing like as frustrating to use as the one in contemporary VWs.

This isn’t the only MEB hatchback in the product plan for Cupra, as the Born was never initially designed to be a Cupra in the first place. Space has been left above for the Tavascan that will combine a more distinctive body with the twin-motor setup. Until then, the Born will arrive in the UK in early 2022, with local prices to be confirmed at the end of this year.

Cupra’s desire to combine the best bits of the VW Group’s components into something distinctive has been successfully realised in its impressive new Leon and Formentor. If it does the same with its electric product lines, there’s little reason to doubt that Cupra could become the VW Group’s dark horse.