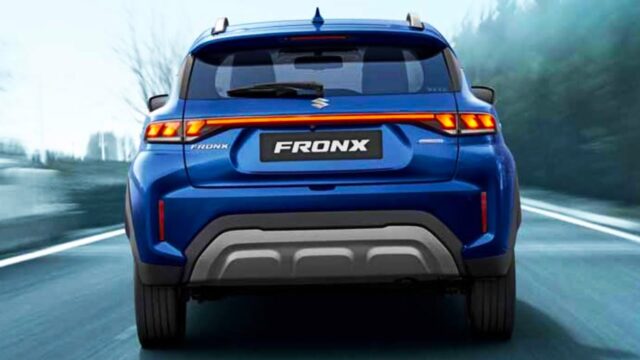 New 2023 Suzuki Fronx – Features, Design, Colors and Interior. The Fronx, Maruti Suzuki’s Baleno-based SUV coupe, has been unveiled at Auto Expo 2023. This new SUV coupe will go on sale by April via the brand’s Nexa outlets. Bookings for the Maruti Fronx have begun.

Maruti’s first compact SUV coupe for the Nexa chain, the Fronx, is based on the Baleno, which means it is also underpinned by the Heartect monocoque platform. Apart from a few body panels shared on the outside, the Fronx gets a more upright nose and a split headlamp set-up similar to the Grand Vitara.

The new front and rear bumpers are chunkier with dedicated faux skid plates at both ends and a subtle dose of chrome. It gets 17-inch alloy wheels that sport a new design, which is again unique to the Fronx and not shared with any other Maruti model.

The Fronx also borrows elements from the Baleno hatchback – like the rising waistline that has a prominent hunch over the rear wheels and the roofline that dips prominently towards the tailgate. As far as dimensions go, the Fronx is 3,995mm long, 1,550mm high and 1,765mm wide – similar to the Baleno.

On the inside too, the Fronx shares many bits with the Baleno, including the dashboard, seating and equipment list – all of which are expected to mirror the premium Maruti hatchback. Both models, however, will have differences in textures and shades, among other bits.

Maruti Suzuki’s first and only turbo-petrol engine, the 1.0-litre Boosterjet, made its debut in the previous-gen Baleno in India in 2017. The engine was positioned as a sportier alternative to the standard engine line-up and was only available in the top-spec Baleno RS. However, due to low sales and the stricter emission norms, Maruti Suzuki had to discontinue the engine.

But the turbo motor now returns with the Fronx, making 100hp and 147.6Nm of torque. It is paired to a 5-speed manual or a 6-speed torque converter automatic gearbox (with paddle shifters) options.

Additionally, Maruti also offers the 1.2-litre K-series (90hp and 113Nm) naturally aspirated petrol engine paired to either a 5-speed manual or an AMT automatic transmission. However, unlike the Grand Vitara, the AWD tech is not available on the Fronx.

The Fronx will go on sale in April and will be positioned as a premium compact SUV. Like the Baleno, it will be retailed via the Nexa outlets. After its launch, it will take on high-riding hatchbacks and compact SUVs like the Citroen C3, Tata Punch, Nissan Magnite and Renault Kiger.

TIMELINE:
Running Footage 00:00
Exterior Features 00:53
Colors 02:03
Interior Design 02:21
———
Hope you enjoy this video and leave your comment bellow. To stay up to date with alot of new Videos

AutoSportMotor - January 14, 2023 0
2023 Mazda MX-30 R-EV Edition R – A special-edition With Rotary Engine. Mazda is bringing back the iconic Wankel engine in a rather unexpected...

January 12, 2023
© AutoSportMotor
We use cookies to personalise content and ads, to provide social media features and to analyse our traffic. By clicking “Accept”, you consent to the use of the cookies. Learn More!
Accept
Manage consent