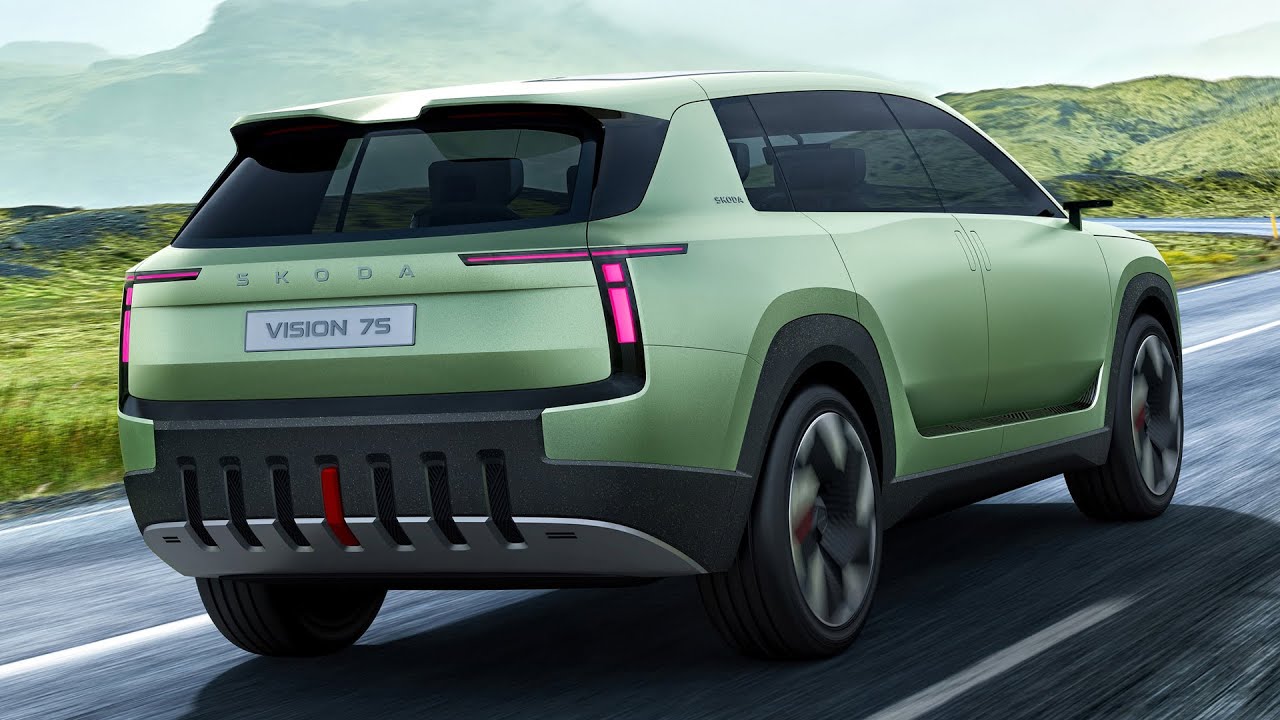 New Skoda Vision 7S – Future Electric 7-Seats SUV With 370 Mile Range. Skoda is working on a seven-seat big brother to the Enyaq SUV that could hit showrooms by 2026, and the Vision 7S concept gives us a huge clue to how it will look.

The three-row electric concept will lead to a production SUV that’s one of three EVs due to be launched by Skoda in the next few years. Two of those will be a small hatchback and a small crossover, but the Vision 7S will be Skoda’s flagship and has its sights set on the space currently occupied by the Kodiaq, though the two models are likely to overlap initially.

It will be based on the same MEB electric platform found under the firm’s Enyaq EV, as well as other VW family electric vehicles like the Volkswagen ID.4 and Audi Q4 e-tron. Skoda says the concept features an 89 kWh battery that gives a range of more than 373 miles (600 km), but it’s how long that battery takes to charge that’s interesting. The maximum charging rate available to Enyaq drivers is 120 kW, but Skoda says the 7S can charge at a more competitive 200 kW, though even that figure is bettered by Korean rivals.

While getting us used to the idea of a larger electric SUV, the Vision 7S’s other main function is to showcase Skoda’s new “modern solid” design language, and also its new branding. The 7S ditches the traditional black and silver Skoda badge for silver lettering above the grille picking out the brand name.

But the new badging is the least striking feature of the 7S’s design, which is dominated by the seven vertical slots in the front and rear bumpers that make it look like the concept is auditioning for the role of Bane in a remake of the Dark Knight Rises. Or maybe Skoda’s designers simply spent too long looking at pictures of Jeeps on their mood board.

Above the bumper slots is a pair of slim headlights that rise to meet ultra-slim horizontally-mounted DRLs, while the company’s trademark front grille shape is carried over from current cars to make them easily identifiable, but this time contains a dark glass screen rather than grille bars. Skoda calls the new face Tech Deck and claims it gives the 7S an impression of strength. But it also looks distinctly premium, as does the surely-Range Rover-influenced rear styling.

The concept’s 22-inch wheels might make it to production but the suicide rear doors and lack of a B-pillar are almost certain to be left on the drawing board, along with at least some of the 7S’s interior features. One that might make it is a roof mounted camera that can relay images of a baby in a rear-facing child seat to the infotainment display in the dashboard. Skoda has also mounted the baby seat on the center tunnel in the concept because it claims it’s the safest place for it.

But one of the more interesting features that even child-free owners might appreciate, particularly given the less than class-leading charging rate, is the dual-configuration interior’s “relax” mode. Press a button on the console and the 14.6-inch portrait touchscreen rotates to make it more suitable for watching movies, the rectangular steering wheel and dashboard slide forward to create more space for front-seat occupants, and those front seats rotate inwards and recline. Being stuck at an EV charging point for 30 minutes wouldn’t seem so bad when you’re spending it in a cabin as well thought-out at this one.
———
Hope you enjoy this video and leave your comment bellow. To stay up to date with alot of new Videos