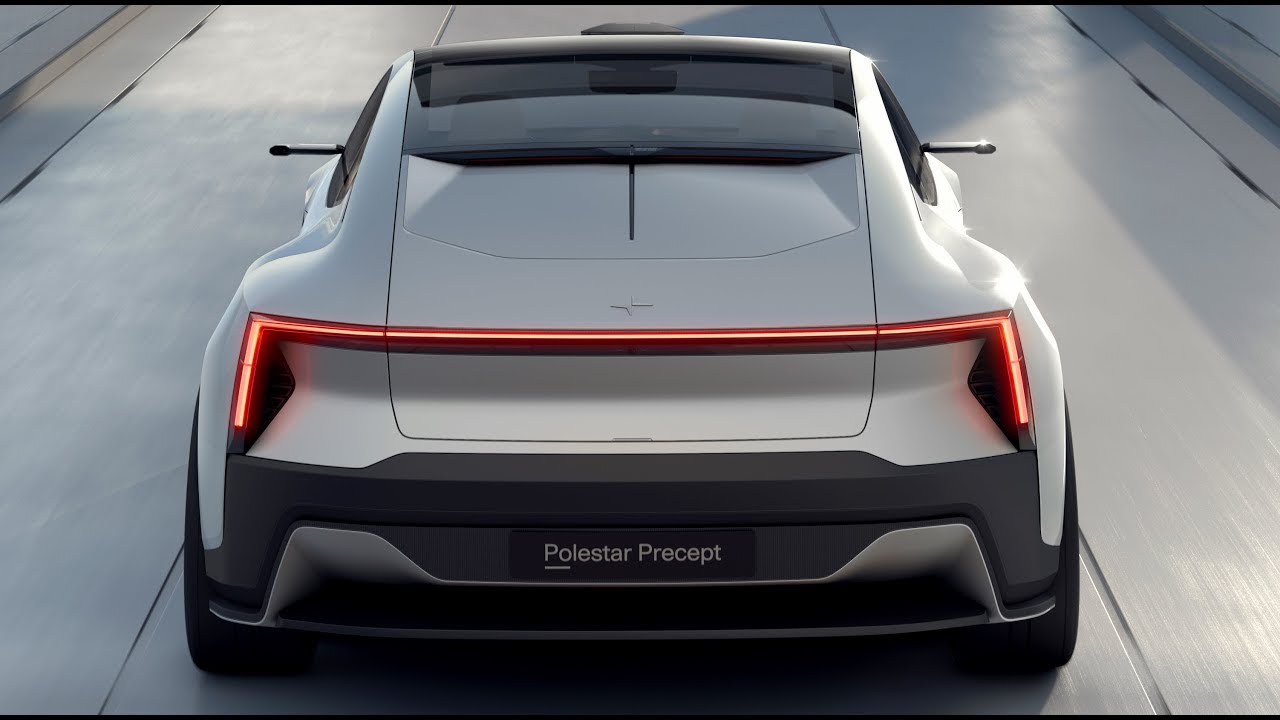 Polestar PRECEPT Concept electric four-door GT – Interior, Exterior and Drive. Polestar recently launched as an offshoot of Volvo that focuses on EVs, has so far unveiled two production models: the Polestar 1 plug-in-hybrid coupe and the battery-electric Polestar 2 4-door. Now, the company is looking ahead with the Polestar Precept, an EV concept debuting at the Geneva auto show.

Whereas both the Polestar 1 and the Polestar 2 hew closely to the current Volvo design language, the Polestar Precept concept breaks fresh ground, visually. The doors are center-opening, and the sleek greenhouse does without B-pillars. The Precept has its own interpretation of Volvo’s “Thor’s Hammer” headlights with their sideways-T motif: Here they’re separated into two horizontal L-shaped lighting elements. With no internal-combustion engine to cool, the front grille has been eliminated. In its place is what Polestar calls its SmartZone. This area houses a high-definition camera and dual radar sensors behind a glass panel, to enable the vehicle’s driver aids. Similarly, a LIDAR pod mounted at the forward edge of the roof will support next-generation driver assistance, such as higher-level autonomy.

Aerodynamics also play a key part in the design. A front wing above the SmartZone grille area facilitates airflow over the concave hood. The shelf-like taillights extend across the rear further smoothing the airflow. A low front splitter extends around to the sides of the car. Cameras on slim stalks (a popular show-car idea that hasn’t won regulatory approval in the United States) replace drag-inducing side mirrors. Inside, a rear camera mirror stands in for a conventional rearview mirror, a feature that has started to appear on production models.

From the outside, the windshield appears to extend uninterrupted into the roof (a la the Tesla Model X), but underneath there is a header at the top of the windshield. The glass roof does, however, extend behind the rear seats in a single pane.

A long wheelbase of approximately 122 inches makes for a roomy interior despite the Precept’s low-slung profile. A floating center console separates the front and rear bucket seats. Sustainability is a theme of the Polestar’s cabin, which makes use of several novel recycled materials. Door panels and seatbacks are made of flax-based composites rather than conventional plastic. Seat upholstery comes from recycled plastic bottles, and the seat bolsters and headrests use recycled cork vinyl. The carpets, meanwhile, are repurposed fishing nets.

Naturally, technology also features prominently in the Precept’s interior. The ultra-minimalist dash houses two screens and no other switchgear. The 15-inch center touchscreen is portrait-oriented while the instrument cluster is a 12.5-inch digital display. The screens incorporate proximity sensors and also adjust their content in response to the operator’s eye movements. The Android-based operating system promises a “next-generation” human-machine interface.

Then there are the futuristic ideas about luxury. What Polestar describes as “an illuminated blade” wraps around the cabin. In between the rear-seat headrests, a piece of Swedish crystal contains a holographic Polestar emblem.

As Polestar head of design Maximilian Missoni summarized: “The combination of sustainable materials and high-tech smart systems opens an entirely new chapter of avant-garde luxury design and shows where Polestar is heading.”